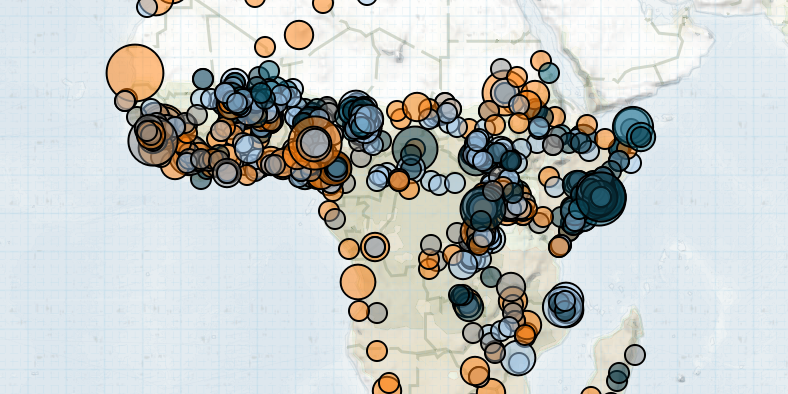 In Africa during the last week of March, state forces increasingly employed violence to enforce coronavirus restrictions. Meanwhile, ongoing Islamist insurgencies had key successes in several countries. Boko Haram launched deadly assaults on state forces in Nigeria and Chad, as militants made significant gains in Mozambique’s northernmost province of Cabo Delgado. Elsewhere, voting was met with violence in Guinea and the Anglophone regions of Cameroon.

Countries continued to implement new restrictions in response to the continued spread of coronavirus in Africa. Restrictions were violently enforced by state forces in a number of countries, including Burkina Faso, Ivory Coast, Kenya, Madagascar, Morocco, Niger, Senegal, South Africa, Togo, and Uganda. Journalists covering coronavirus restrictions were also the target of violence, with attacks by state forces reported in Chad, the Democratic Republic of Congo, and Kenya.

In Chad, state forces suffered severe losses when Boko Haram militants from the Shekau faction launched an attack on a military camp on Bohouma island in the Lac region. Upwards of 90 soldiers were reportedly killed, making it the deadliest ever attack by Boko Haram in Chad. The Chadian government responded by designating the departments of Fouli and Kaya in the Lac region as warzones and urging people to leave the area ahead of planned military operations.

In Nigeria’s Borno state, Boko Haram inflicted heavy losses on state forces. Dozens of soldiers were killed when militants fired on a military convoy in the Gorigi area. The soldiers were returning from clearance operations in the Allargano forest at the time of the attack.

In Cameroon, Ambazonian separatists attempted to disrupt voting on 22 March, as legislative elections were restaged in several, mostly Anglophone, areas. Ambazonian separatists engaged in an armed clash with the military forces in Bamenda department, also firing on a polling station in Momo department. Meanwhile, the Southern Cameroons Defence Forces (SOCADEF), an Ambazonian separatist group, declared a two week ceasefire. The declaration was announced in response to a call by the United Nations Secretary-General António Guterres for a global cessation of fighting in order to protect vulnerable populations from the coronavirus (The Africa Report, 30 March 2020).

Meanwhile, Guinea was hit by widespread and violent demonstrations in response to a controversial referendum vote on presidential limits, held on 22 March. The demonstrations were the latest in an ongoing campaign launched by the opposition National Front for the Defence of the Constitution (FNDC) in October 2019. The referendum, which provisional results suggest was successful (Al Jazeera, 27 March 2020), ushers in increases to presidential terms from five to six years. It will also allow president Alpha Condé to run for a further two terms, resetting the current two term constitutional limit (Reuters, 27 March 2020). Following several days of clashes between demonstrators and state forces in the aftermath of the referendum, the government announced a state of emergency in response to the coronavirus pandemic.

Finally, the ongoing Islamic insurgency in Mozambique’s Cabo Delgado made its most significant gain to date with the capture of Mocímboa da Praia’s district capital. Having inflicted heavy losses on state forces, militants erected barricades, raised their (and Islamic State) flag and occupied the town. The attack was followed by an assault on the district headquarters of Quissanga in the south of Cabo Delgado, in which militants destroyed the district police headquarters. The successful assaults on district headquarters contrast with more common attacks on villages, and are indicative of an increasing operational sophistication within the insurgency (New Humanitarian, 24 March 2020).

Timothy Lay is the Africa Research Manager with ACLED. He holds an M.A in International Relations (International Humanitarian Action) from Rijksuniversiteit Groningen, and speaks English and Indonesian. Timothy’s research interests center on the relationships between religion and conflict.
1 April 2020
Share
TweetShare on Twitter Share on FacebookShare on Facebook Share on LinkedInShare on LinkedIn

Timothy Lay is the Africa Research Manager with ACLED. He holds an M.A in International Relations (International Humanitarian Action) from Rijksuniversiteit Groningen, and speaks English and Indonesian. Timothy’s research interests center on the relationships between religion and conflict.