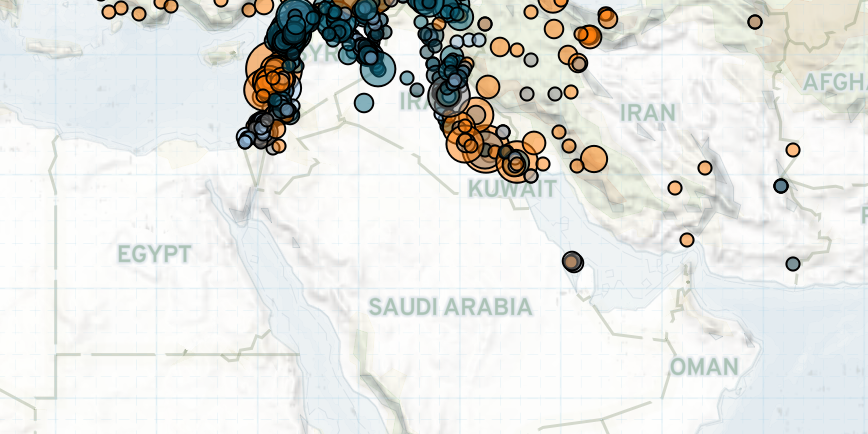 Following a major decrease in battles across the region at the end of February, clashes increased by a small margin in Yemen, Syria, and Iraq. Remote violence and explosions continued to decline across all countries with the exception of Iraq, where IED attacks by unidentified groups and the Islamic State (IS) have been on the rise, primarily in Diyala governorate, and where Turkey has ramped up airstrikes targeting the Kurdistan Workers’ Party (PKK) in the northwest.

In Yemen, local and regional forces initially responded positively to the UN Security Council’s call for a ceasefire during the coronavirus pandemic on 25 March (Al Monitor, 27 March 2020). Though no coronavirus cases have been confirmed in Yemen as of yet, the truce would allow the country’s devastated healthcare system to brace for a potential outbreak. On a similar note, Saudi Arabia announced to have invited Houthi representatives for peace talks in the kingdom (Wall Street Journal, 30 March 2020). Nevertheless, few concrete steps have been taken to implement a ceasefire and fighting has continued. Intense clashes occurred between Houthi forces and anti-Houthi forces in Hodeidah, Al Jawf, and Marib governorates. Territory was exchanged in Al Jawf, Hajjah, and Marib governorates as Houthi forces continued their efforts to advance towards Marib city. Additionally, the Saudi-led coalition conducted a significant number of airstrikes, mostly in Al Jawf, Hajjah, Marib, Sadah, and Sanaa governorates.

Clashes between pro-Southern Transitional Council (STC) and pro-Hadi forces continued in the south of Yemen last week in Aden, Abyan, and Shabwah governorates. Pro-STC and pro-Hadi forces redeployed throughout Abyan governorate in contravention of the ‘Riyadh Agreement’ for the second consecutive week. Houthi forces also launched ballistic missiles from Yemen into Saudi Arabia toward the cities of Jizan and Riyadh on Saturday evening (Al Jazeera, 29 March 2020). The missiles were reportedly intercepted by the Patriot missile defense system used by Saudi air defense forces, causing minor damages and light injuries to two civilians. The day prior, Houthi drones were destroyed after infiltrating over 100km into Saudi airspace. At the same time, Houthi forces have offered to release a number of Saudi fighters, including the pilot of a Tornado fighter-bomber downed in February, in exchange for the release of members of Hamas on trial for supporting ‘terrorism’ in Saudi Arabia (Al Jazeera, 28 March 2020).

Meanwhile in Syria, the March ceasefire agreement in the northwest continued to hold despite a number of relatively minor attacks along the current frontlines. Notably, no airstrikes were reported last week.

The coronavirus has now arrived in Syria, with 10 confirmed cases across the country. No cases have so far been reported in northwestern Syria, where preparedness and response planning is underway to develop effective prevention strategies, reduce transmission risk, and ensure the continued provision of humanitarian assistance. However, the spread of the disease could quickly become critical, especially in camp settings, if additional measures are not put in place (OCHA, 27 March 2020).

Last week in Iraq, the Green Zone was once again the target of a rocket attack with no reported casualties. The withdrawal of American and other coalition troops continued as the US moved to consolidate its troops in two locations, possibly to curb the impact of repeated attacks on bases hosting US forces (Bloomberg, 29 March 2020). Other members of the coalition, such as France and the Czech Republic, suspended training operations for Iraqi troops over coronavirus concerns (Rudaw, 25 March 2020).

While IS has so far only claimed two attacks last week, violence has continued to rise in Iraq, likely due to the security vacuum caused by the country’s political crisis. The situation has been exacerbated by the coronavirus outbreak, as security forces focus on implementing the nationwide curfew. The popular movement that began on 1 October 2019 held one demonstration in Baghdad last week in an effort to keep up momentum during the coronavirus outbreak, while minor clashes were reported between demonstrators and police forces after authorities attempted to remove tents left in the demonstration squares.

Similarly, in Lebanon, clashes broke out when security forces attempted to remove demonstration tents in Beirut. There were also a number of protests calling for the release of prisoners amid the coronavirus pandemic.

In an apparent response to the coronavirus pandemic, Bahrain released thousands of prisoners last week. While the release included approximately 300 people incarcerated for political offenses, it excluded the country’s most prominent political prisoners (Human Rights Watch, 23 March 2020). While the partial release is largely seen as a positive step, many activists do not view the move as a significant concession, particularly because many of the most prominent political prisoners are elderly and in ill health – making them among the most susceptible to the virus. If the situation continues to deteriorate, there could be renewed demonstrations calling for the release of these prisoners.

In Iran, there were three additional prison riots over fears that the facilities will not be able to control the spread of coronavirus. In Saqqez city, more than 75 prisoners escaped from prison during a riot.

In Palestine, attacks by settlers and Israeli security forces against Palestinians and their property are on the rise. As the Palestinian Authority (PA) has taken steps to contain the spread of the coronavirus, tensions have risen with nearby settlements and Israeli forces. In Nilin, a village mostly in area C of the West Bank (where the Israeli military has sole authority), PA forces were deployed to the entrance of the village in an effort to enforce limitations on the movement of residents. Last Sunday, a man from the village was reportedly shot and killed by Israeli forces. Israeli authorities claim he was throwing stones, while Palestinian media reported that he was driving in his car at the time (Middle East Eye, 23 March 2020). Israeli police were also accused of abuse after they left a Palestinian laborer from the West Bank who was exhibiting symptoms of coronavirus on the side of the road at a checkpoint without coordinating with Palestinian medical authorities (Times of Israel, 24 March 2020). These events raise serious concerns that Israel is not only failing to effectively coordinate with the PA on a coronavirus response, but also actively limiting the PA’s ability to deal with the outbreak. With confirmed coronavirus cases in the West Bank and Gaza, the situation is likely to become increasingly dire if the outbreak is not controlled.

Finally, in Turkey, clashes have picked up between Turkish forces and the PKK, as they typically do in the spring. Armed clashes were reported in Agri, Mardin, Bitlis, and Sirnak provinces. Additionally, attacks by local vengeance groups targeting police and civilian properties remain consistent, with 12 reported last week. The Turkish government also continued to remove elected mayors from the Peoples’ Democratic Party (HDP) in eastern municipalities and replace them with appointed trustees, called the ‘kayyum’ policy. On 23 March 2020, the Turkish government removed eight HDP mayors who had entered office after the March 2019 local election. The ‘kayyum’ policy has been imposed on a total of 40 municipalities, mostly run by the HDP, on the grounds of ongoing terrorism investigations against the mayors, though this was the first removal since 20 December 2019. Furthermore, an unknown group attacked a Yazidi cemetery in Cilesiz village in Nusaybin, Mardin, breaking tombstones and causing material damage. This is the first violent event targeting the Yazidi minority recorded in Turkey since the beginning of ACLED’s coverage.