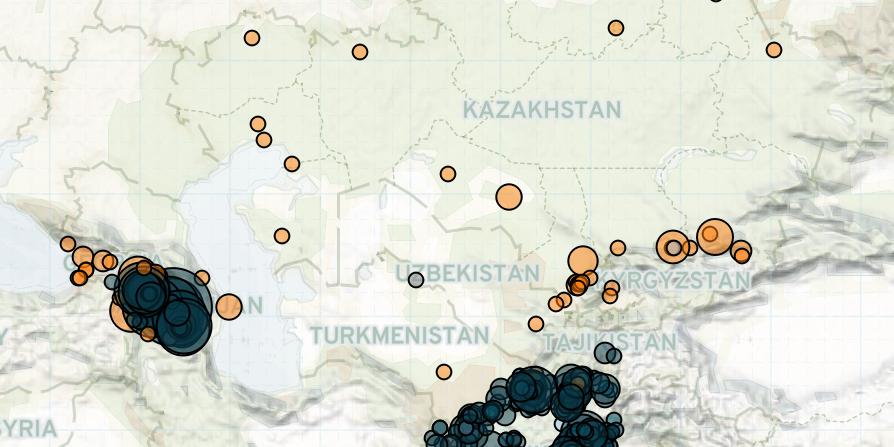 Last week in Central Asia, prisoner exchange negotiations continued between the Taliban and the government in Afghanistan, as state forces arrested the leader of the country’s Islamic State affiliate. In Kyrgyzstan, measures to contain the spread of the coronavirus triggered protests, while the pandemic led to rising food prices in Uzbekistan and Turkmenistan, fueling unrest. In the Caucasus, ceasefire violations continued to cause casualties.

Violence remained relatively low in Afghanistan, as Taliban and Afghan government officials held their first face-to-face talks to finalize the exchange of prisoners. Since that meeting, however, a Taliban spokesman said the group has broken off the talks, blaming the Afghan government for delaying the prisoner release. According to a member of the government’s negotiating team, the delay was due to the Taliban’s demand that they release 15 high-ranking commanders, whom the government fears would return to the battlefield (Al Jazeera, 7 April 2020). Although the Taliban previously indicated that they would “stop fighting” in areas under their control if those areas were affected by the coronavirus (AP, 1 April 2020), the suspension of the talks raises concerns over a new escalation of violence. The Taliban have also accused American forces of failing to comply with the terms of the US-Taliban agreement by allegedly conducting drone strikes on civilians. The group has warned that the deal is nearing a breaking point and that their fighters may be forced to “increase the level of fighting” (Al Jazeera, 5 April 2020).

In another development, Afghan government forces arrested Aslam Farooqi, the leader of Islamic State Khorasan (IS-K) in Afghanistan, along with 19 other fighters, including two commanders. According to Afghan officials, Farooqi became the group’s leader after the death of Abu Saeed Bajawori in 2018 (Al Jazeera, 4 April 2020). The arrest comes less than two weeks after IS-K launched a deadly assault on a Sikh temple in Kabul, reportedly killing 25 people. The group, which has targeted religious minorities in Afghanistan since 2015, also killed 19 members of the country’s Sikh community in Jalalabad in 2018, including the only Sikh candidate planning to run in parliamentary elections (BBC, 1 July 2018). Security experts suggest that despite consistent operations targeting IS-K commanders, the group has “continuously replenished key leadership positions” (CTC, 1 September 2019). Although weakened, IS-K is likely to continue its attacks on civilians in Afghanistan.

In Kyrgyzstan, measures to curb the spread of the coronavirus continued to cause public unrest over the past week. On 25 March, the Kyrgyz government introduced curfews in Bishkek, Osh, Jalal-Abad, Suzak, Kara-Suu, and Nookat cities and installed checkpoints along the city perimeters. Residents who work in other regions are obliged to produce a document proving their residency when returning home, a process which has faced criticism as inefficient (RFE/RL, 25 March 2020). On 31 March, residents of Novopavlovka village in Sokuluk district of Chui region blocked the road that passes through the town, claiming that some drivers use it to evade police roadblocks on the nearby highway to Bishkek city. Another protest took place on 1 April in Mayak village of Tup district in eastern Issyk Kul region, against plans to establish a quarantine facility for potential coronavirus patients. On the same day, the windows of the building designated for the proposed facility were smashed, leading regional authorities to roll back the decision.

In Uzbekistan, a hike in food prices triggered demonstrations in local markets as residents accused food distributors of illegally price gouging amid the coronavirus crisis. On 28 March, quarrels broke out between a vendor and shoppers in the town of Koshkupyr in Khorezm region over the doubling of potato prices. In another instance, a group of residents in Muzrabot district protested against the vendors at a local bazaar over a sharp increase in prices. Further reports from across the country included long queues and sporadic brawls in marketplaces that hindered social distancing measures (RFE/RL, 30 March 2020). Authorities have blamed vendors for the price hikes, claiming that offenders received hefty fines.

Meanwhile, in Turkmenistan, on 4 April, a group of women staged a demonstration in the city of Mary due to food shortages and rising prices, which have already caused significant problems despite the lack of confirmed coronavirus cases in the country (RFE/RL, 4 April 2020). The government has preemptively introduced new restrictions related to the crisis, reportedly including a “ban” on using the word ‘coronavirus’ (Reporters Without Borders, 31 March 2020) — though there are countering reports as to whether this “ban” is official (the level of transparency of the Turkmen government tends to be quite low) (Eurasianet, 1 April 2020). In an application of this “ban”, there were claims last week in Lebap province that authorities detained offenders for 10 days over mentioning the virus.

In the Caucasus, ceasefire violations between Azerbaijan and Armenia continued to result in casualties. On 30 March, the Ministry of Defense (MoD) of Armenia reported that Armenian forces repelled an Azerbaijani attack near Noyemberyan region of Tavush. Two Armenian soldiers were wounded. On the same day, shelling from Azerbaijan reportedly injured a child from the village of Voskevan, Tavush, while Azerbaijan’s Ministry of Defence (MoD) claimed that these attacks were retaliatory. Meanwhile, the overall number of ceasefire violations was similar to weeks prior, with Azerbaijan’s MoD reporting 34 armed engagements along the Artsakh-Azerbaijan Line of Contact and 32 armed engagements along the Armenia-Azerbaijan Line of Contact. Additionally, Artsakh’s MoD reported that Azerbaijani forces fired 1,300 shots into Armenian positions and were responsible for more than 170 ceasefire violations on the Artsakh-Azerbaijan Line of Contact, similar to the previous week (Artsakh Republic Ministry of Defence, 4 April 2020).