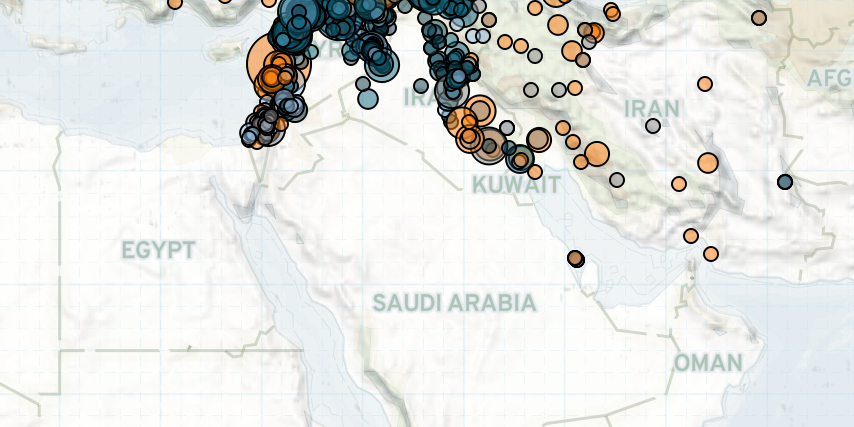 Across the Middle East, there were relatively few events compared to the weeks prior. Key developments include: continued fighting despite calls for a ceasefire in Yemen; increased Islamic State (IS) clashes in Iraq, as well as the formation of Adnan Al Zurfi’s cabinet; and, coronavirus-related demonstrations in Iran, particularly prison riots.

Despite the UN Security Council’s call for a ceasefire to fight the coronavirus on 25 March, hostilities between Houthi and anti-Houthi forces increased throughout Yemen last week. The majority of armed clashes took place in Ad Dali, Hodeidah, Al Jawf, and Marib governorates. Territory was taken by anti-Houthi forces in eastern Al Jawf and in western Marib governorates. The territories in the Sirwah district of Marib, among them parts of the strategic Jabal Haylan, had been under Houthi control for years. On the other side, Houthi forces took over the Labinat military camp in al Jawf governorate and some adjacent areas threatening Marib city from the North. For more on the impact of coronavirus on conflict in Yemen, see this recent Spotlight infographic from ACLED’s COVID-19 Disorder Tracker (CDT).

Clashes between pro-Southern Transitional Council (STC) and pro-Hadi forces were reported in Abyan governorate. These clashes come after weeks of redeployments by pro-STC and pro-Hadi forces in contravention of the ‘Riyadh Agreement.’ Meanwhile, some clashes were reported in Aden between pro-STC forces and reinforcements of the Saudi-led coalition, which arrived in the Al Burayqah area in Aden city.

Additionally, Al Qaeda in the Arabian Peninsula (AQAP) claimed three attacks against Houthi forces in the Dhi Naim district of Al Bayda. These attacks represent a significant uptick in activity as AQAP had previously claimed only five attacks throughout Yemen in 2020.

Although there are no confirmed cases of the coronavirus in Yemen as yet, a number of governorates have braced for its likely arrival. This includes the release of thousands of prisoners by pro-Houthi and anti-Houthi forces alike (Mareb Press, 4 April 2020).

Last week in Iraq, hundreds of demonstrators clashed with police in Nassiriya while calling for financial compensation to mitigate the effects of the lockdown and curfew imposed to curb the spread of coronavirus. Security forces tried to disperse the demonstrators using live fire, reportedly killing one demonstrator and one police officer in the clashes.

Meanwhile, IS engaged in at least 17 armed clashes primarily with the Iraqi military forces as well as the Popular Mobilization Forces (PMF), continuing the upward trend reported since the beginning of the year. IS is eager to take advantage of the security vacuum created by the withdrawal of US and allied coalition forces over reported coronavirus fears (Foreign Policy, 6 April 2020). The US withdrawal may also be motivated by the escalation in rocket attacks on bases hosting coalition forces, allegedly launched by Iran and Iran-backed militias. Both the US and Iran have exchanged a recent round of threats, foreshadowing a possible confrontation in Iraq (Bloomberg, 7 April 2020).

Furthermore, Iraq’s Prime Minister-designate Adnan Al Zurfi formed his government ahead of the specified deadline and presented his proposed government program to the parliament (Middle East Monitor, 7 April 2020). However, he faces significant obstacles posed by the Iran-backed factions and Shiite blocs in parliament, who have so far rejected him. Eight factions of the PMF released a statement accusing Al Zurfi of being an “American Intelligence candidate” (Middle East Monitor, 7 April 2020). The passing of Zurfi’s government and program poses a major test for Iraq in regards to Iranian influence in the country. It could also lead to a broader shift in Iraq’s political landscape, possibly affecting any confrontation that may take place between the US and Iran.

In Syria, regime forces continued to shell targets in the Greater Idleb area while sporadically clashing with opposition and Islamist factions along the frontlines. Meanwhile, Turkey reinforced several of its positions and observation posts in northwest Syria with troops, armored vehicles, and logistical equipment.

While fewer events were reported in Turkey last week compared to the week prior, there were several significant developments. The Kurdistan Workers’ Party (PKK) claimed to have killed at least 30 Turkish soldiers on 31 March during a clash near the Gurbulak border crossing with Iran in Dogubeyazit, Agri. The PKK then reported that this was followed by a suicide attack on the major natural gas pipeline transporting Iranian gas to Turkey, which caused a huge blast and destroyed five army vehicles full of soldiers (HPG, 1 April 2020). However, Turkish sources reported that one PKK militant was killed during the clashes, confirming that a fire broke out on the pipeline due to an ‘unknown reason’ but making no mention of a deadly explosion as claimed by PKK (Daily Sabah, 31 March 2020). An Iranian official said that Turkish border guards had left due to the coronavirus outbreak and that gas flow was halted to Agri due to the explosion.

Additionally, a member of a popular banned leftist band, Grup Yorum, died on Friday after 288 days of hunger strike. Helin Bolek started the hunger strike with another band member while in prison to protest the government’s treatment of her band and to demand a fair trial (The Guardian, 3 April 2020). The following day, despite police repression and coronavirus restrictions, a march was organized during the funeral ceremony. The police prevented the group from marching, dispersed the crowd, and detained many participants. Authorities only allowed a few family members to attend the funeral and used tear gas to disperse the crowd gathering around the cemetery (Bianet, 4 April 2020).

Salma Eissa is the ACLED-Religion Research Manager. Salma has an M.A. in Near and Middle Eastern Studies from the School of Oriental and African Studies (SOAS), University of London, London. She has 10 years of experience in the Egyptian civil society and research and academia sectors, and has a keen interest in political analysis and trends and patterns of political violence in the MENA region. She is fluent in Arabic and English, and is based in Cairo, Egypt.