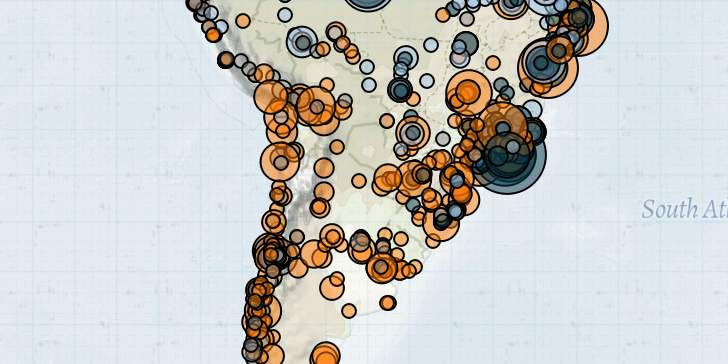 Last week in South America, key developments include: a decrease in the number of demonstrations in most countries; political killings in Colombia; attacks on opposition supporters in Venezuela; protests both for and against quarantine measures in Brazil, as well as continued armed clashes between criminal groups and state forces; and steps taken by indigenous groups in Suriname and French Guiana to lockdown their communities to avoid the spread of the coronavirus.

The number of demonstration events decreased sharply across the region last week, although some protests related to the pandemic were reported. In Colombia, protests were reported in multiple cities calling for the government to provide financial aid and basic goods. Workers and informal merchants claimed their income has decreased due to the quarantine. In Chile, labor groups protested over the lack of hygienic and safety measures taken by employers to protect their workers. Peaceful protests were also reported in prisons in Chile, as inmates called on authorities to take steps to prevent the spread of the coronavirus. Human rights activists urged the government to grant quick trials for inmates awaiting court judgments due to the risk of contagion inside overcrowded detention facilities. In Puente Alto prison, located in the Metropolitan Region, a riot broke out after the confirmation of five coronavirus cases, including four inmates and one prison guard.

Political killings continued in Colombia, largely matching the weekly average for the year. Two members of indigenous communities and two former members of the Revolutionary Armed Forces of Colombia (FARC) were killed in four separate events in the Nariño, Cauca, Putumayo, and Tolima departments. Activists have raised concerns that armed groups could take advantage of quarantine measures to ramp up their attacks on vulnerable groups (The Guardian, 23 March 2020).

In Venezuela, state forces reportedly targeted supporters of opposition leader Juan Guaidó belonging to the Popular Will (VP) party. Special Action Forces (FAES) officers stripped a female supporter naked, beat her, and threatened her with sexual assault. She was later released. In another event, FAES officials abducted two aides of Guaidó. Their whereabouts are still unknown. These attacks came after the United States offered the regime of President Nicolas Maduro relief from economic sanctions if an interim government is established (DW, March 31, 2020).

In Brazil, pot-banging protests continued for the third consecutive week across multiple cities in opposition to President Jair Bolsonaro and his remarks about the coronavirus pandemic. On 31 March 2020, in an official announcement broadcast on TV, the President recognized the seriousness of the pandemic, which he had minimized in his previous week’s announcement. The following day, however, he once again questioned the quarantine measures adopted by state governors. Several motorcades demanding the re-opening of business were reported in some cities, but less than the number recorded in the previous week.

The number of armed clashes remained steady in Brazil. In Rio de Janeiro state, shoot-outs and police operations against gangs such as the Third Pure Command (TCP) continued. In Para state, a leader of the Red Command was killed during a police operation to arrest him. Similarly, the number of attacks on civilians perpetrated by drug trafficking groups and police militias did not change significantly compared to the previous week, with more than 30 reported events.

In both Suriname and French Guiana, indigenous communities blocked access points to their territory in order to curtail incoming visitors who could spread the coronavirus.