Over the last six months there have been a number of significant updates to the political situation in Iraq as it grapples with the pressure of the October Revolution protest movement as well as foreign interference from the United States (US) and Iran. While the political context has changed substantially, the movement’s core demands remain largely unanswered. Iraq’s stability will depend on the new government’s ability to make concessions to the protest movement – temporarily dormant due to the spread of coronavirus – and the broader reduction of geopolitical tensions between the US and Iran.

In December 2019, Prime Minister Adil Abdul Mahdi stepped down following pressure from the protest movement (more on the movement below). Qassim Soleimani, a major general in the Islamic Revolutionary Guard Corps (IRGC) and a commander of the Quds Force, and Abu Mahdi Al Muhandis, a prominent leader of the Popular Mobilization Forces (PMF), were killed in an American airstrike on 3 January 2020, upsetting the fragile security situation in Iraq and pushing Iran and the US closer to war. Demonstrators set a deadline in mid-January 2020 for the government to respond to their demands. When the deadline expired without substantive changes, demonstrations again skyrocketed – with violent riots overtaking peaceful protests for the first time. Although the movement has now suspended demonstrations due to the coronavirus outbreak, potentially blunting its momentum, the pause could allow the demonstrators to reorganize and to push for further concessions when the health crisis subsides. 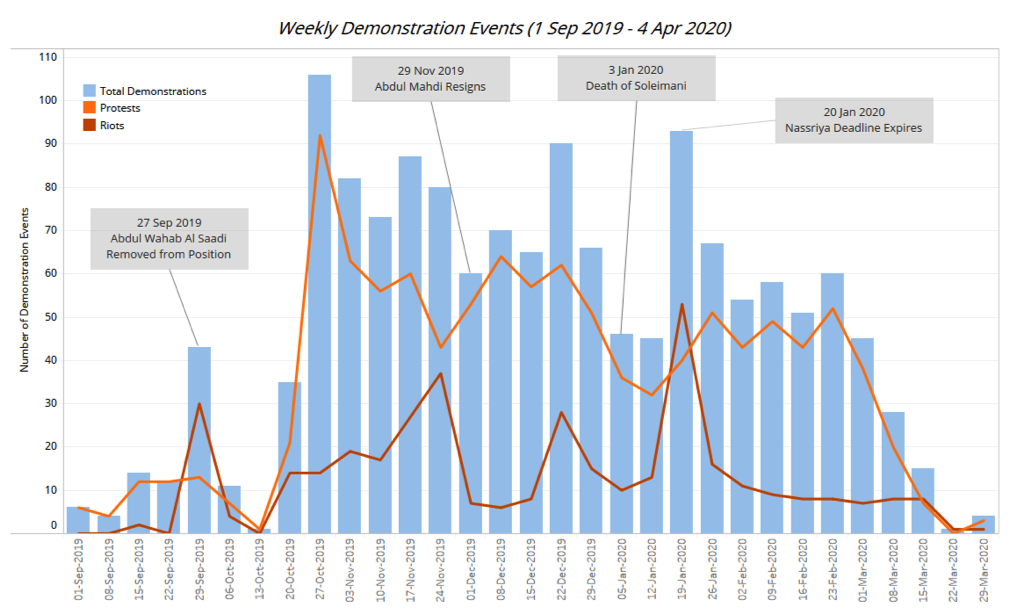 The October protest movement – which is arguably the largest grassroots socio-political mobilization in Iraq’s modern history – started primarily as an anti-government and anti-corruption movement calling for more jobs and public service provisions (Brookings, 31 January 2020). It is a leaderless, largely spontaneous movement that has lasted longer than previous protest movements (for more, see this past ACLED piece) and has evolved to include larger segments of Iraqi society. While it was started by youth and students, it soon attracted a wide array of participants, including teachers, lawyers, and union members. Women have also played a significant role, taking part in the demonstrations from the start and holding feminist rallies in February 2020 that stressed their role in the movement. As the demonstrators’ base grew, so did their demands and their rejection of the ruling elite, particularly the ethno-sectarian political system (muhasasa system) that was imposed on the country following the US invasion in 2003 (Middle East Institute, 31 January 2020).

These concerns were evident in the initial catalyst of the demonstrations: the sacking of Lieutenant General Abdul Wahab Al Saadi in late September 2019. Al Saadi commanded the country’s elite counter-terrorism forces and was a key figure in the defeat of the Islamic State (IS) in 2017 (Euronews, 3 October 2019). Seen as one of the few public figures who resisted party politics and sectarianism, many viewed his firing as the decision of a corrupt administration made at the behest of Iran. Rallies against the move placed the issue of Iranian influence and anti-sectarianism at the heart of the popular movement, alongside calls for jobs, public services and an end to corruption.

The movement’s core concerns over Iranian influence came to the fore following the US strike killing Qassim Soleimani and Abu Mahdi Al Muhandis on 3 January 2020. Though Soleimani’s death dominated headlines, the death of Al Muhandis was just as crucial for Iraq and Iran due to the vast political and military power held by the PMF. Iranian influence in the country is directly tied to the PMF and, following the defeat of IS, the PMF grew to approximately 150,000 soldiers and more than 50 brigades, among them Kataib Hezbollah (KH), the Badr Organization, and Asaib Ahl Al Haq (Foreign Policy, 31 July 2019). In 2019, there was a push to formally integrate the PMF into the Iraqi security forces; however, not all of the militias agreed to the integration, leaving their actions largely unchecked.

The killing of Soleimani and Al Muhandis threatened the existence of the movement at a crucial moment following the resignation of Prime Minister Abdul Mahdi. For many, Abdul Mahdi’s removal represented the first concrete step towards achieving a complete overhaul of the system, with further constitutional and electoral reforms ahead. Yet the geopolitical fallout from the killings threatened to overshadow the movement and put the demonstrators on a crash course for confrontation with Iran-backed militias, as the protesters were unrelenting in their demands to curb Iranian influence. In Basra and Nassiriya, Kataib Hezbollah opened fire on protesters who refused to mourn Soleimani, killing a demonstrator (Washington Institute, 10 January 2020). Demonstration activity dropped in the week of the airstrikes and the week after, only regaining momentum on the week of 19 January, ahead of the deadline given by the demonstrators to the government to heed their demands (see graph below). 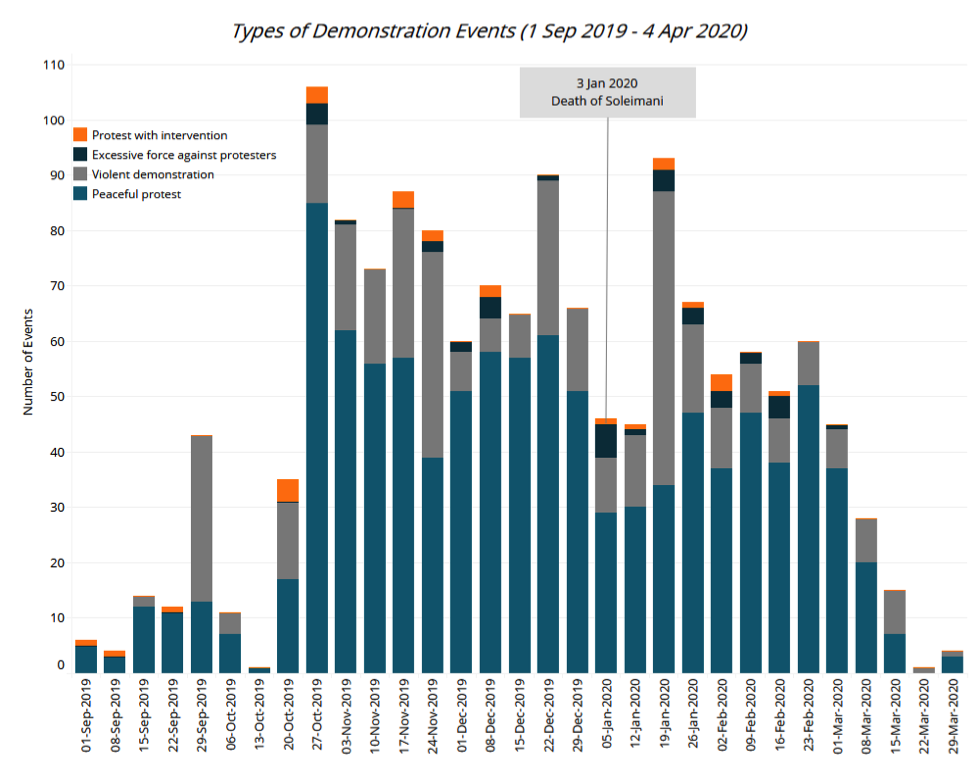 State forces and militia groups violently cracked down on the movement. Attacks on demonstrators were unprecedented in scale, with more than 500 fatalities reported between October 2019 and April 2020, according to ACLED data (blue line in the graph below). Most repressive measures and cases of excessive force were carried out by the police and their rapid reaction forces. 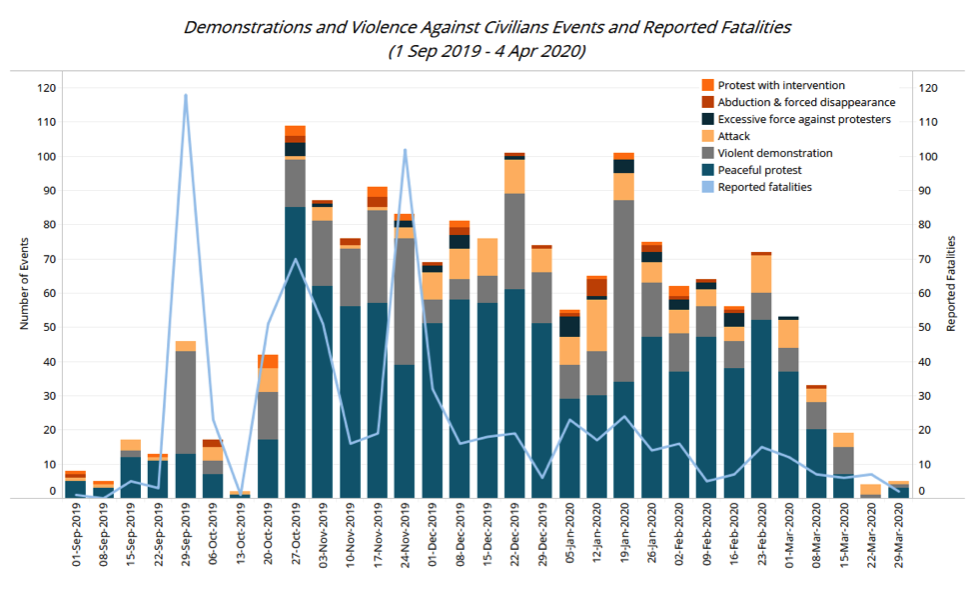 A number of instances involving demonstrators storming the headquarters of local Iranian-backed militias, such as Asaib Ahl Al-Haq and Badr Organization, involved security forces firing at demonstrators — often resulting in significant fatalities. These incidents were mainly reported during the first two months of the demonstrations, when most of the violence took place.

Since the start of the protest movement, many activists who most often took part in the demonstrations were targeted by anonymous agents after leaving demonstration squares. They faced a high number of these targeted attacks and abductions (in yellow and brown in the graph above).

Another major political actor whose actions have had a significant impact on the movement is Shiite cleric Muqtada Al Sadr, who heads the Sairoon coalition (one of the two leading political factions in parliament). His withdrawal of support from the movement in late January 2020 caused several of his supporters, who previously were participating in the demonstrations, to turn on the movement and to attack demonstrators.

Geographic Spread of the Movement

The movement has been able to expand quickly throughout the six months from October 2019 through March 2020 to include eastern and central Iraqi provinces alongside the southern provinces, effectively spreading throughout the entire country (see maps below). Key southern cities such as Nassriya, Basra, Diwaniya, and As Samawah, along with the capital, Baghdad, serve as the main hubs of the demonstrations. However, the demonstrations also took hold of central Iraqi cities, such as Kerbala and Hilla, and the eastern cities of Kut and Baquba, where a significant number of the violent demonstrations took place. Even provinces such as Ninewa, Saladin, and Anbar, which were formerly held by IS, experienced sporadic protest activity. However, their fears, as mainly Sunni areas who reportedly allowed IS to take over, limited their protests to symbolic activities, such as holding up signs displaying the number of demonstrators killed (Jadaliyya, 26 October 2019). 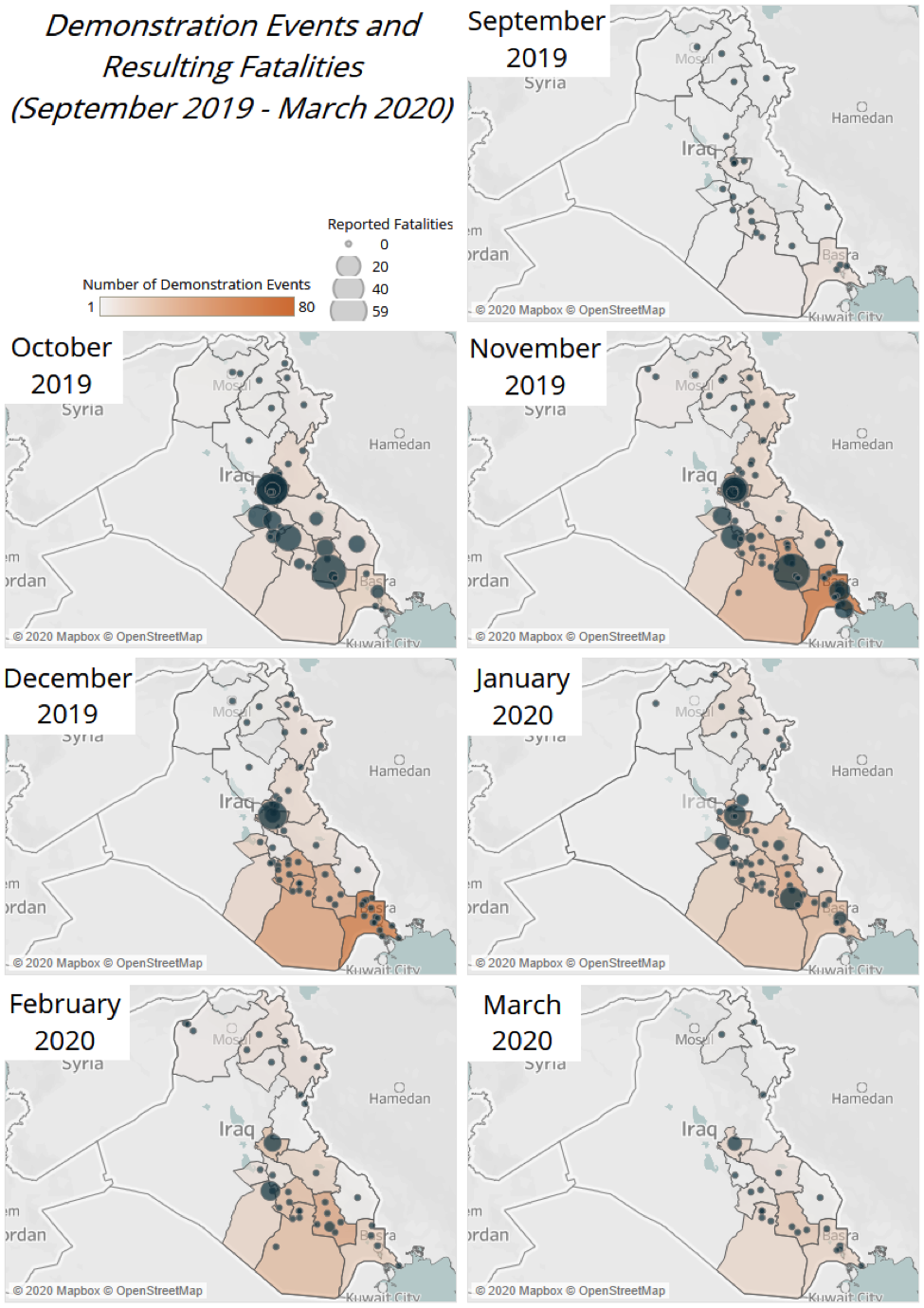 This proliferation of the movement was largely fueled both by citizens’ grievances towards a state which was not meeting their needs, compounded by the fact that the state had responded to the movement by killing a large number of people.

Now, six months later, the movement has been effectively brought to an abrupt halt by the coronavirus outbreak. On 21 March 2020, demonstrators announced they would be returning to their homes until the threat of coronavirus passes (Asharq Al Awsat, 22 March 2020). In the absence of major political reforms, the demonstrators vow to return to the streets once again after the threat of coronavirus abates. Simultaneously, repeated provocations and retaliatory attacks between the US and Iran have raised the risk of a serious confrontation on Iraqi soil. Along with the political turmoil following the withdrawal and rejection of the second Prime Minister-designate, Mohamed Tawfik Al Allawi, Iraq faces an array of significant threats to its security. On 9 April, Prime Minister-designate Adnan Al Zurfi stepped down and was replaced by Mustafa Al Kazimi, who is the third person nominated to lead the country since the December resignation of Prime Minister Abdul Mahdi. His nomination comes amidst an outcry by a number of Iranian-backed militias, who accused him of being an American agent. He was also previously rejected by the demonstrators due to his reported ties to a number of pro-Iran groups in parliament, who are viewed to have been behind his nomination. This development is likely to prolong the state of instability in the country.