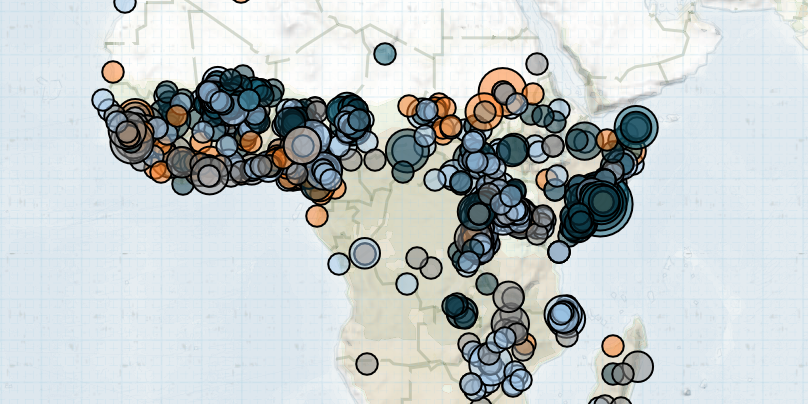 In Uganda, state forces continued to target civilians under the guise of coronavirus containment measures. In a number of incidents, police reportedly attacked civilians in their homes. Elsewhere, police violence during the enforcement of coronavirus measures turned fatal in Nigeria, Kenya, Mali, and Ghana.

In Nigeria, growing economic hardships from coronavirus measures prompted demonstration activity and clashes between rioters and police. In particular, demonstrations were held at a number of locations against perceived inadequacies in the distribution of foodstuffs and cash transfers. In Kaduna, rioters and members of the Civilian Joint Task Force clashed at a food distribution point. Market traders also demonstrated and clashed with state forces in multiple locations as they attempted to resist coronavirus restrictions. At a market in Kaduna, multiple fatalities were reported when traders clashed with police during a demonstration against the Civilian Joint Task Force’s closure of the market.

Meanwhile, in the northern state of Borno, multinational state forces battled with Boko Haram militants and conducted airstrikes on Boko Haram camps. The strikes came as Chadian forces completed Operation Boma’s Wrath, aimed at dislodging Boko Haram militants from the Lake Chad area. In Cameroon’s Far-North, Boko Haram launched a complex assault on the village of Amchide in Kolofata subdivision. Two suicide bombers detonated themselves before militants opened fire on people fleeing the scene. The militants also engaged in a firefight with the military’s rapid intervention battalion, which intervened to repel the attack.

The conflict in Libya continued to escalate last week. The Government of National Accord (GNA) and Khalifa Haftar’s Libyan National Army (LNA) clashed several times in Tripoli, notably around Wadi a Rabie, Ayn Zarah, and Mashru al Hadhba. The clashes came amid the continued shelling of Tripoli by LNA forces, as the GNA employed Turkish drones to target LNA supply lines in Tarhuna and Bani Walid. Civilian infrastructure was also repeatedly targeted during the week. LNA forces shelled the Al-Kadhra Hospital in Bani Salim on three separate occasions. The hospital was widely known to be treating coronavirus patients at the time of the shelling (New York Times, 13 April 2020). Tripoli and several other western cities also suffered water interruptions during the week. An unidentified armed group stormed a control station of the Great Man Made River Project at Shwerif and blocked water from being pumped to Tripoli and the western region.

In Mali, JNIM militants carried out a successful attack on an army camp in the Gao region, killing dozens of soldiers and seizing vehicles, arms, and equipment before burning the camp. JNIM militants also expanded their activity in the Kayes Region, overrunning gendarmerie and ranger stations. Meanwhile, more than a hundred were killed as JNIM and ISGS forces clashed at multiple locations around Dialloube in the Mopti region. ISGS was forced to withdraw from the area following the clashes. Although ongoing tensions between the rival groups have previously manifested in small clashes, fighting of this magnitude had not previously occurred.

Presumed JNIM militants also overran a military base at Sollé in Burkina Faso’s north. A number of soldiers were killed in the attack, as militants seized a large number of vehicles and weapons before burning the base. The militants returned the following day, targeting volunteer fighters and civilians.

In Mozambique, the Zimbabwean-owned Dyck Advisory Group carried out a number of airstrikes on Islamist militants in the Cabo Delgado. The private military company has replaced the services of the Russian-owned Wagner Group, which left the region following operational deficiencies (Daily Maverick, 9 April 2020). The insurgency in Cabo Delgado continues to gain momentum, staging significant operations in Muidumbe district. Militants also reoccupied the town of Bilibiza in Quissanga district. After seizing control of the town, the militants reportedly declared that they would be enforcing Islamic practices (Club of Mozambique, 9 April 2020).

Elsewhere, the Renamo Military Junta attacked a timber yard and killed a Vietnamese worker in Mozambique’s Sofala province. The attack represents a marked change from the normal operations of the Renamo Military Junta, which has largely staged attacks on highways and main roads. The group is a breakaway faction of Renamo that has been continuing their insurgency in an attempt to negotiate better terms than the August 2019 peace deal signed by Renamo and the Mozambican government (Club of Mozambique, 8 April 2020).