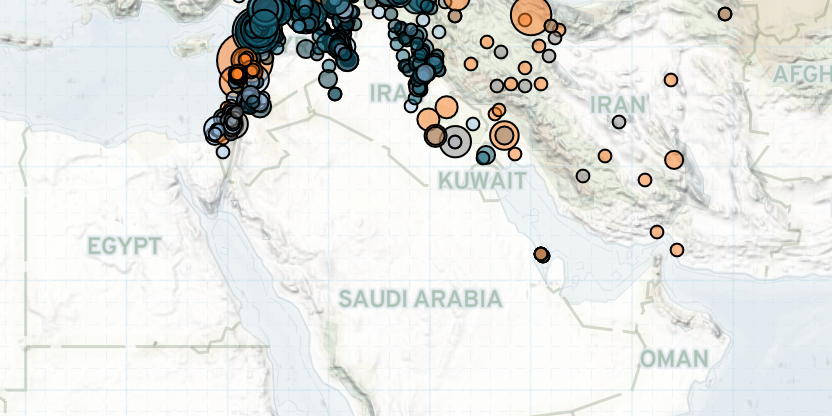 Across the Middle East, events related to the COVID-19 pandemic continue to dominate the news cycle, with restrictions now implemented in most countries aimed at preventing and containing the spread of the coronavirus. Aside from coronavirus-related protests, the key development in the region last week was increased Islamic State (IS) activity in Yemen, Iraq, and Syria.

Demonstrations related to coronavirus were reported in Bahrain, Lebanon, Turkey, Iran, Yemen, Israel, and Palestine. In Bahrain, people stood on their balconies chanting “God is Great” in solidarity with political prisoners who remain incarcerated despite concerns that the virus will spread in the prison system. In Lebanon, a prison riot broke out as inmates demanded a general amnesty during the pandemic. There were also several protests against the implementation of new restrictions in the country, particularly in Tripoli. Coronavirus-related restrictions also led to a protest in Turkey. Protests were additionally held against the release of prisoners and against government legislation that would allow employers to propose unpaid holidays for their workers during the outbreak. In Iran, most protests were held by workers against the closure of factories, while others called for financial support due to lost income. In Israel, settler youth — who were suspected of having been exposed to coronavirus — smashed the windows of a bus that was sent to take them to a quarantine shelter in the country’s south. Settlers in Modiin Ilit also protested lockdown measures, provoking clashes with residents who called them “murderers” for not adhering to the social distancing rules. Clashes were reported between Palestinian youth and Israeli forces in Jerusalem as authorities closed the main intersection of Anata.

Furthermore, in Palestine, the Palestinian governor of Jerusalem was arrested from his home in Silwan for ‘Palestinian activity in Jerusalem’ (Al Jazeera, 5 April 2020). All Palestinian Authority (PA) activity is banned by Israel in Jerusalem. Additionally, dozens of Palestinian prisoners held in Israeli prisons began a hunger strike over the lack of protection against coronavirus (Middle East Monitor, 3 April 2020).

In Yemen, the first case of coronavirus was confirmed in Hadramawt governorate (Supreme National Council for COVID-19, 10 April 2020). Yemeni hospitals are ill-prepared to deal with an outbreak. In recent weeks, protests have taken place outside medical centers against hosting coronavirus patients. Making matters worse, the World Food Programme (WFP) announced it would soon cut food rations to Houthi-controlled territory in half. This comes after donors, including the US, reduced funding due to concerns that the Houthis are impeding aid deliveries (BBC, 10 April 2020). The WFP feeds over 12 million Yemenis each month — 80% of whom are in areas under Houthi control (Reuters, 9 April 2020). Beginning in mid-April, aid will be reduced from every month to every other month in Houthi-controlled areas.

The Saudi-led coalition announced a unilateral two-week ceasefire on 9 April to help prevent the spread of the coronavirus in Yemen (BBC, 9 April 2020). Houthi forces welcomed the ceasefire, but clashes continued at the same frequency as before on the major frontlines in Al Jawf, Marib, and Al Bayda governorates. Pro-Hadi forces regained territory towards the Labinat military camp, while Houthi forces took over the Khanjar military camp, both situated in the north of Marib city. Meanwhile, pro-Hadi forces launched new offensives in neighboring Al Bayda governorate in order to divert Houthi attention from Marib and relieve pressure on the city.

IS militants attacked Houthi forces in Ad Dali governorate for the first time last week (AEI Critical Threats, 10 April 2020). Previously, IS had mainly operated in the Qayfa region of Al Bayda governorate, although they had claimed some attacks in Aden, Ibb, and Taizz.

In Iraq, Mustafa Al Kazimi, the country’s intelligence chief, became the latest Prime Minister (PM)-designate after Adnan Al Zurfi withdrew from candidacy following pressure from Shiite political parties. He is the third nominee for PM in the last 10 weeks, following the December resignation of PM Adel Abdul Mahdi (Middle East Eye, 9 April 2020). While Al Kazimi has received significant support from pro-Iran groups, such as the Fatah coalition and the State and Law coalition, several pro-Iran militias, such as Kataib Hezbollah, have wholly rejected him. Iraq’s protest movement had also rejected Kazimi before and recently launched an online campaign entitled “We Promise The Revolution Will Return” on Facebook in an attempt to keep up momentum for its demands, amongst them an independent PM. (For more on the latest trends around demonstrations in Iraq, see this recent ACLED analysis piece.

At the same time, a prominent female activist, commonly known as “Umm Abbas”, was killed by unknown perpetrators at her home following riots in Nassriya city. The riots reportedly killed at least one demonstrator and a member of the security forces (Asharq al-Awsat, 6 April 2020). Anger in Nassriya erupted following the curfew put in place to curb the spread of coronavirus. While residents and business owners feel the financial strain of the curfew, IS has taken advantage of the state’s preoccupation with the coronavirus as an opportunity to increase activity. Further compounding the issue is the suspension of coalition operations and the withdrawal of coalition forces, which has prompted Iraqi forces to launch preemptive operations in an attempt to cut off IS supply routes and weaken their combat capabilities (Al Monitor, 9 April 2020).

Finally, in Syria, IS launched an attack against Syrian forces in the town of Sokhneh in the Homs desert. Russian airstrikes were reported in the area. Elsewhere, sporadic clashes took place in the Greater Idleb region between Syrian regime forces and opposition and Islamist factions. Nevertheless, the ceasefire that began at the start of March largely holds.

Lauren Blaxter is a Middle East Research Manager at ACLED. She has been responsible for coding Israel, Palestine, Lebanon and Jordan since May 2017. Lauren holds a BA in Human Rights, a Graduate Diploma in Law, and a LLM in International Criminal Law. Her work focuses on law and forensics in armed conflict.
Salma Eissa

Salma Eissa is the ACLED-Religion Research Manager. Salma has an M.A. in Near and Middle Eastern Studies from the School of Oriental and African Studies (SOAS), University of London, London. She has 10 years of experience in the Egyptian civil society and research and academia sectors, and has a keen interest in political analysis and trends and patterns of political violence in the MENA region. She is fluent in Arabic and English, and is based in Cairo, Egypt.
15 April 2020
Share
TweetShare on Twitter Share on FacebookShare on Facebook Share on LinkedInShare on LinkedIn