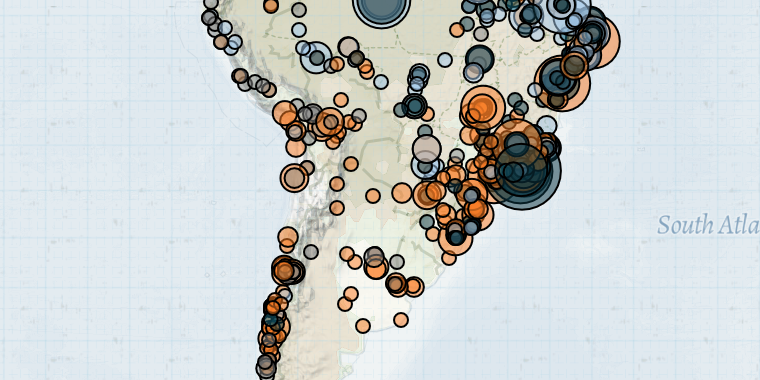 Last week in South America, key developments include: a decrease in the number of demonstrations in most countries as governments increased border control measures; fighting between armed groups in Colombia; violent disorder in Peru; and protests in support of quarantine measures in Brazil, as well as continued armed clashes between criminal groups and state forces.

Demonstrations continued to decrease sharply across the region last week, following the trend observed in previous weeks. Still, multiple protests were reported against government failures to provide financial aid and basic goods during the coronavirus pandemic. In Venezuela, citizens demanded access to potable water, food, and medicine. The Wayuu indigenous community demonstrated to call for access to basic goods during the quarantine, leading to a clash with the Venezuelan National Guard. In Chile, residents demanded more rigorous curfew measures to limit movement in several different areas around the country.

Violence broke out in Peru amidst fears of the virus. In Ancash department, members of a Ronda Campesina – an autonomous peasant patrol – captured and whipped the district mayor, who was found drinking alcohol with other people, in violation of the countrywide lockdown. In two distinct events in Huancavelica and Lima departments, locals attacked state forces and health workers who were burying the dead infected with coronavirus.

The coronavirus pandemic also triggered border controls that have impacted the flow of migrants across the region. In Chile, in the border city of Colchane, Bolivian military forces clashed with a group of at least 500 Bolivian migrants who attempted to re-enter their home country. Bolivian authorities claimed the group was composed of supporters of former President Evo Morales and his political party, the Movement for Socialism (MAS), who intended to take advantage of the pandemic to attack quarantine centers and destabilize the country (La Nacion, 7 April 2020). In Venezuela, authorities imposed a curfew in two cities of Táchira state, the main crossing point for the large influx of migrants returning from Colombia. Authorities claimed the measure is intended to prevent the entrance of armed groups.

In Colombia, the National Liberation Army (ELN) recently declared a unilateral ceasefire amidst the coronavirus outbreak. However, clashes were reported between ELN members and the Gulf Clan in Chocó department, as the groups continue to fight for control of territories and criminal markets in the region. The ELN declaration emphasized that, while they would refrain from carrying out attacks, they reserved “the right to defend ourselves” against raids carried out by opponents (Colombia Reports, 20 March 2020).

In Brazil, pot-banging protests continued for the fourth consecutive week across multiple cities in opposition to President Jair Bolsonaro and his remarks minimizing the coronavirus pandemic, as he called for the reopening of businesses. Tensions within the government rose after the Health Minister publicly defied Bolsonaro’s position by supporting the ongoing quarantine measures (The Guardian, 13 April 2020).

The number of reported armed clashes remained steady in Brazil. In Rio de Janeiro state, despite quarantine measures, the authorities continued to conduct operations aimed at curbing the advance of drug trafficking groups and police militias in several communities. In two distinct events, members of the Red Command (CV) attacked police officers, with no reported fatalities.

The number of attacks on civilians perpetrated by drug trafficking groups and police militias slightly increased compared to the previous week, with more than 40 reported events across the country.