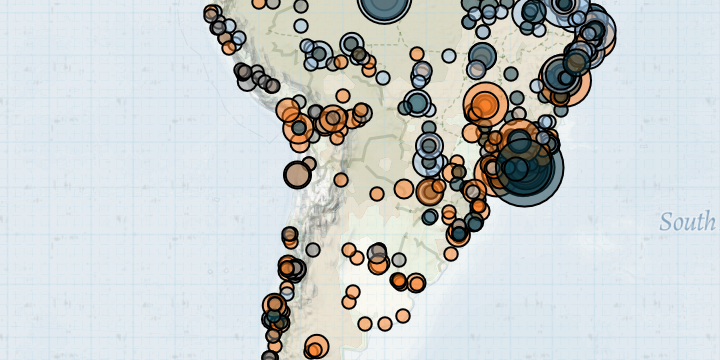 Last week in South America, key developments include: an increase in the number of demonstrations in Colombia and Venezuela; clashes between members of dissident Revolutionary Armed Forces of Colombia (FARC) groups and military forces in Colombia; prison riots in Colombia, Chile, and Peru; intensified Mapuche militia activities in Chile; and protests both for and against quarantine measures in Brazil, as well as continued armed clashes between criminal groups and state forces.

Demonstrations significantly increased in Colombia and Venezuela last week, despite reinforced quarantine measures imposed by authorities. In Colombia, health workers protested to demand resources and adequate protection equipment to treat infected patients. Protests were also reported in multiple cities as citizens called for the government to provide food parcels and basic goods. In Antioquia department, dozens of people from vulnerable areas looted vehicles with food, claiming they have not received sufficient aid from authorities. In Venezuela, citizens continued to demand access to potable water, food, and medicine. In addition, farmers and fishermen demonstrated across the country to demand the distribution of fuel, as they have not been able to transport their products. Protests against the chronic fuel shortage are not uncommon in Venezuela, as the country has been dealing with a prolonged collapse of its oil industry. However, demonstrations are expected to increase as the coronavirus pandemic leads to the rationing of reserves (OilPrice, 13 April 2020).

In Colombia, 12 members of FARC dissident groups were killed in battles with military forces in Antioquia and Cauca departments. Colombian authorities continue to lead operations against armed groups despite the general quarantine imposed in the country. (Deutsche Welle, 15 April 2020).

Prison riots were reported in Colombia, Chile, and Peru due to poor detention conditions and fear of the pandemic. In Lambayeque department, Peru, prisoners burned mattresses and clashed with the police over fears of a possible coronavirus case inside the prison. Two prisoners were killed.

The coronavirus pandemic continues to impact the flow of migrants across the region as border controls and shutdowns are reinforced. In Venezuela, more than 3,500 Venezuelan refugees have returned from Brazil, Colombia, Ecuador, and Peru. In Chile, Peruvian citizens demonstrated in Arica y Parinacota region over the lack of support for migrants stranded at the border crossing. Near the city of Arica, Chilean security forces clashed with Peruvian state forces after Chilean police tried to stop a person from illegally crossing the border and entering Peru.

Furthermore, in Chile, the conflict between Mapuche militias and Chilean authorities intensified, as a group of at least 30 armed men ambushed a police patrol and detonated explosives in Bío-Bío region. The armed group’s declared aim is to target state forces and Mapuche activists who engage in negotiations with logging companies present in the region. The Mapuche community is the largest indigenous group in Chile. Several Mapuche militias are active in the country’s south, where they demand restitution of their land rights in areas controlled by forestry companies (Minority Rights Group International, 2020)

In Brazil, pot-banging protests continued for the fifth consecutive week and intensified across multiple cities in opposition to President Jair Bolsonaro and his remarks minimizing the coronavirus pandemic. On 16 April, Bolsonaro fired the Health Minister after a weeks-long standoff over the President’s push to reopen businesses in spite of health concerns from state governors (G1, 16 April 2020). Following the episode, several motorcades against quarantine measures were reported in multiple cities, marking a significant increase compared with the number recorded during the previous week.

The number of armed clashes remained steady in Brazil, as authorities continued to conduct operations aimed at curbing the advance of drug trafficking groups and police militias in several communities. At least 30 people were killed in clashes between state forces and organized criminal groups, including a military police officer in Aracaju city, Sergipe state, who was suspected of belonging to a police militia. While many drug trafficking groups in Rio de Janeiro imposed curfews and instructed citizens to wear masks, police militias, on the other hand, echoed the President’s instructions and obliged people to return to work (G1, 17 April 2020).

The number of attacks on civilians perpetrated by drug trafficking groups and police militias slightly decreased compared to the previous week, with 30 reported events across the country.