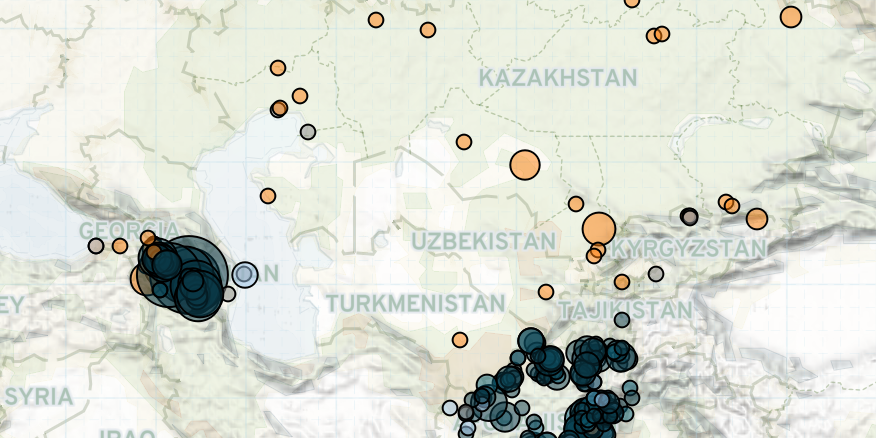 Last week in Central Asia and the Caucasus, deadly clashes continued in Afghanistan amid new efforts to resolve the country’s political crisis; workers rioted over coronavirus fears in Kazakhstan; and farmers protested in Kyrgyzstan, Kazakhstan, and Georgia to demand assistance from authorities preoccupied with the pandemic. Despite international efforts to decrease ceasefire violations between Armenia and Azerbaijan, armed engagements carried on along the Azerbaijan-Armenia-Artsakh Lines of Contact.

In Afghanistan, fighting between Taliban and Afghan security forces continued at similar levels to weeks prior, though overall violence has declined slightly since March. The deadliest clashes took place in Kandahar, Takhar, Balkh, and Urozgan provinces, with reports of civilian casualties (AP, 20 April 2020; Al Jazeera, 27 April 2020). Afghan forces regained control over six villages in the Qaysar district of Faryab and three villages in the Sholgara district of Balkh, a strategic location at a crossroads between multiple districts. The Taliban, on the other hand, overtook the Kamanj village in Shahrak district of Ghor province. Meanwhile, President Ashraf Ghani released 55 more Taliban prisoners and called for a ceasefire ahead of Ramadan, stating that local authorities are working to tackle the coronavirus crisis even as the Taliban continues to launch frequent attacks targeting Afghan forces (Al Jazeera, 24 April 2020). The Taliban rejected the call, requesting the release of more prisoners and arguing that its agreement with the US entails a ceasefire in later stages (Voice of Jihad, 25 April 2020; Reuters, 24 April 2020).

As the slow pace of prisoner exchanges delays intra-Afghan talks, the rivalry between President Ghani and Afghanistan’s Chief Executive Officer Abdullah Abdullah also poses an obstacle to any peace deal (VOA News, 23 April 2020). However, some progress was made to resolve this crisis last week. Abdullah accepted an offer to lead the High Reconciliation Council, which is planned to oversee the peace talks with the Taliban, with the participation of influential political figures (Afghanistan Times, 15 March 2020). Although the council is not yet fully formed and its impact remains to be seen, Abdullah is likely to play a prominent role in the country’s future as peace talks move forward (TOLO News, 21 April 2020; 25 April 2020).

In Kazakhstan, unrest related to coronavirus measures continued. On 19 April, workers at an oil project in the eastern town of Tengiz smashed the windows of a building where the company was housing other workers possibly infected with the coronavirus. Another riot took place in Kaskelen town near Almaty city, where residents rampaged through a local clinic hosting possible coronavirus patients and smashed the windows.

The nationwide quarantine – and the resultant slowdown in administrative processes – is also impacting the rural population grappling with various seasonal challenges. Villagers in Koktal town in East Kazakhstan region protested last week after an animal disease killed scores of livestock in the area, claiming that the authorities overlooked the problem because of the pandemic. Similarly, in Kyrgyzstan, villagers and farmers of Jany-Jer village in Batken district protested against the lack of irrigation water supply and its harm to their crops. Villagers gathered at a nearby police quarantine roadblock and asked authorities to prioritize their needs.

Farmers also protested in Georgia by blocking the road connecting Marneuli and Shulaveri village and asking the government to help them sell their agricultural products during the lockdown. A similar protest took place in Aghmamedlo town of Marneuli on 23 April, as farmers claimed that they could not sell their products due to coronavirus-related travel restrictions. Marneuli municipality is one of the main agricultural production areas in Georgia, and it has been under lockdown since 25 March (Agenda.ge, 22 April 2020). Moreover, with the Georgian government extending the lockdown until 25 May (JAM News, 24 April 2020), the opposition-held protests in Tbilisi and Batumi throughout the week to demand less restrictive measures in light of the economic downturn. Police intervened in the demonstrations in Tbilisi due to the violation of social distancing rules, unlike in Batumi where the protesters stood apart from each other wearing masks.

Meanwhile, Azerbaijan’s Ministry of Defense (MoD) reported 10 armed engagements along the Line of Contact with Armenia and 39 armed engagements along the Line of Contact with Artsakh throughout the past week, slightly lower than the previous week’s report. However, Artsakh’s MoD reported 3,500 shots from Azerbaijani forces into Armenian positions, marking a significant increase from 1,800 shots reported last week. It also stated that Azerbaijan was responsible for more than 180 ceasefire violations on the Artsakh-Azerbaijan Line of Contact (Artsakh Republic Ministry of Defence, 25 April 2020). Additionally, the Ministry of Foreign Affairs of Armenia reported over 192 armed conflict events between Azerbaijan and Armenia in March 2020, an increase of about 15% from January and February 2020.

Overall, the number of ceasefire violations reported by the Azerbaijani MoD in April 2020 was so far lower than in March 2020, possibly due to international efforts to decrease the level of violence on the Armenia-Artsakh-Azerbaijan Lines of Contact amid the coronavirus emergency (OSCE, 19 March 2020). During the past few weeks, the UN Appeal for Global Ceasefire (UN, 23 March 2020) and OSCE’s call to both parties to refrain from provocative actions during the pandemic resulted in a meeting between the Azerbaijani and Armenian foreign ministers. They renewed their intentions to continue with the peace process, which was considered a positive step (OSCE, 21 April 2020) as it may potentially lead to refreshed diplomatic engagement between the leaders of the two countries, which has so far failed to materialize (ACLED, 20 February 2020; Eurasianet, 23 April 2020).