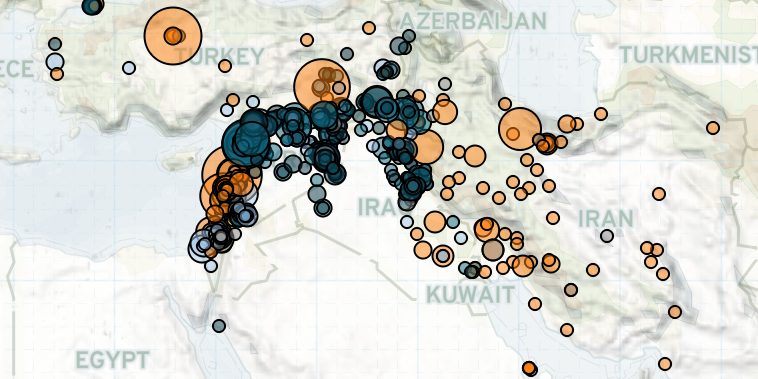 Across the Middle East, relatively few battles, explosions, and remote violence events were reported last week. However, demonstrations increased around the region, including in Yemen, Iraq, Lebanon, Iran, Israel, and Palestine. Attacks against civilians also increased in Syria, Yemen, and Palestine.

In Yemen, on the evening of 25 April 2020, the Southern Transitional Council (STC) announced a state of emergency in the south and declared self-administration in Aden and other governorates under its control, effective at midnight (STC South Arabia, 25 April 2020). The ‘Riyadh Agreement,’ designed to bring pro-Hadi and pro-STC troops together to combat the Houthis as a combined force, is now effectively void after months of insecurity and alleged violations by both parties (Al Monitor, 6 April 2020). The night before the STC’s announcement, widespread rioting occurred throughout Aden city. In every district except Al Buraiqeh, which hosts the Saudi-led coalition’s headquarters, demonstrators blocked streets and burned vehicle tires in response to ineffective governance. The rioters highlighted the poor government response to massive flooding in Aden and inadequate provision of services and utilities like electricity.

Meanwhile, the Saudi-led coalition announced the extension of its unilateral ceasefire for the entire month of Ramadan (Al Jazeera, 24 April 2020), though it continued to conduct significant airstrikes in Houthi-controlled territories. Ground clashes centered on major frontlines in Ad Dali, Al Bayda, Marib, and Sanaa governorates. Anti-Houthi forces claimed to have regained significant ground in Al Bayda, while Houthi forces claimed to have overtaken some areas in Al Jawf governorate. Along the Marib-Sanaa border region, Houthi and anti-Houthi forces exchanged territory throughout the week as frontlines shifted back and forth.

Last week in Iraq, following weeks of inactivity due to the coronavirus outbreak, the October 2019 protest movement resumed demonstrations on 21 April in Nassriya calling for the release of detained activists. In Baghdad, conflicting reports emerged regarding an attack on demonstrators that left at least one killed and others injured (Al Jazeera, 21 April 2020). Protesters claimed they were attacked by an unknown armed group, casting blame on supporters of specific parties and militias, while other reports indicate that clashes broke out between demonstrators and shop owners (Rudaw, 21 April 2020). At the same time, some news outlets also report that riot police had perpetrated the attack in an attempt to disperse the demonstrations (Shafaaq News, 21 April 2020). The demonstrations likely presage increased unrest in the coming weeks. As the government eases lockdown restrictions – and the protest movement continues to reject Prime Minister-designate (PM) Mustafa Al Kazimi – demonstrations may slowly return to key cities like Baghdad and Nassriya. For more on the latest trends around demonstrations in Iraq, see this recent ACLED analysis piece.

Meanwhile, Islamic State (IS) activity has continued to increase since the implementation of the country’s coronavirus lockdown in March, with at least 12 attacks last week in Diyala and Kirkuk provinces. Whereas at the beginning of the year IS activity mainly consisted of attacks targeting villages in disputed areas and small-scale attacks on civilians, over the past month the group’s attacks have become increasingly sophisticated and focused on targeting security forces. At the same time, a coordinated state response is hampered as the battle to secure a government rages on, with PM-designate Al Kazimi contending with rival voices in parliament.

After a sharp decline following the onset of the coronavirus pandemic, demonstrations increased in many countries across the Middle East, indicating the potential for a new wave of mass protests. Many of the core factors driving the protests – such as corruption, unemployment, and poor living conditions – have been further exacerbated by lockdown measures and economic losses. In Lebanon, anti-government protesters took to the streets yet again, together with other protesters defying the stay-at-home order. Demonstrations spiked after a sudden increase in the dollar exchange rate. Around 30 labor protests were reported in Iran, approximately one-third of which were related to financial problems caused by the spread of the coronavirus and related restrictions. In Israel, ‘Black Flag’ protests increased last week against the unity deal signed by PM Benjamin Netanyahu and challenger Benny Gantz. Protesters say that the agreement violates the Basic Laws of Israel (Jerusalem Post, 26 April 2020). The coronavirus pandemic is a major reason for the formation of the unity government, and protesters fear that the state of emergency is being used to enable corruption. In Beit Shemesh and Mea Shearim, ultra-orthodox residents demonstrated against coronavirus restrictions, as they affect the orthodox education system. (Please see the recent CDT spotlight pieces on trends related to the coronavirus in Iran, Israel and Palestine)

In Palestine, clashes between Israeli forces and Palestinians increased in the West Bank and East Jerusalem as Israeli personnel launched arrest raids and other security operations. Furthermore, while settler attacks against Palestinians decreased, Israeli military attacks against civilians increased. There were multiple reports of Israeli forces injuring Palestinians at checkpoints in the West Bank and firing at fishermen and farmers in Gaza. Following the attacks in the West Bank, on 22 April, a Palestinian assailant rammed his car into a border police officer at a checkpoint in East Jerusalem and then attacked the officer with a pair of scissors (Times of Israel, 22 April 2020). Border Police opened fire on the attacker and reportedly killed him.