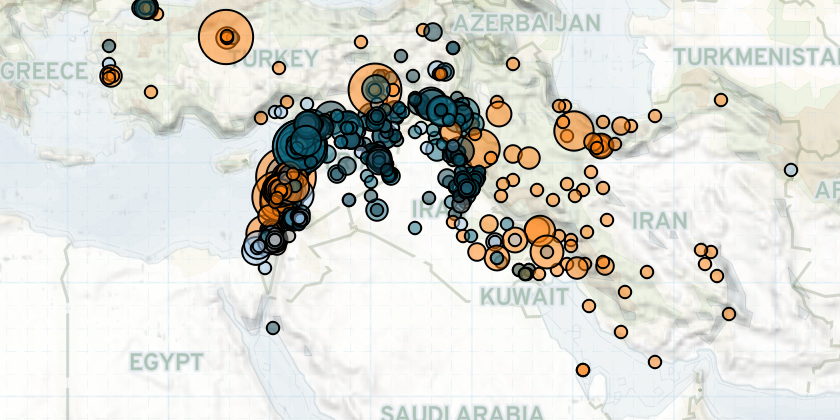 Last week, more demonstrations were reported across the Middle East than in any week since the beginning of the coronavirus pandemic in early March. Islamic State (IS) activity continued to rise in Iraq, while clashes flared over control of the island of Socotra in Yemen.

Though the spike in demonstrations was fueled in part by region-wide protests marking International Workers’ Day on 1 May, the increase was largely driven by a surge of activity in Lebanon, where labor protests were held in addition to large demonstrations over the poor dollar exchange rate. The dollar exchange rate increased significantly in the past week, now constituting a 50% loss in value compared to the Lebanese pound in October 2019. In Tripoli, demonstrations turned violent when Molotov cocktails and firecrackers were used against security forces. One demonstrator was reportedly killed by authorities (Reuters, 28 April 2020). Banks were targeted by rioters throughout Lebanon, as demonstrators blame the dollar crisis on the governor of the central bank, Riad Salameh.

Demonstrations also spiked in Iraq for the first time since the coronavirus lockdown, as authorities began easing restrictions. The increase also coincided with the formation of a government by Prime Minister-designate Mustafa Al Kazimi. As the parliament gears up to vote on the proposed government, the October 2019 protest movement appears to be remobilizing. The continued use of force by authorities, which reportedly left at least four demonstrators injured in Al Rifai in Thi-Qar province last week, is likely to fan the flames of unrest (Al Mirbad, 27 April 2020).

IS activity has also continued to increase throughout Iraq, with events moving closer to Baghdad. In a particularly prominent recent operation, IS launched two simultaneous attacks in Saladin province on 2 May, reportedly killing 10 Popular Mobilization Forces (PMF) fighters. This was part of a three-day string of attacks on security forces, the PMF, and the Tribal Mobilization Forces (TMF). The group also bombed power lines in rural Diyala province (Kurdistan 24, 4 May 2020). In response, operation ‘Desert Lions’ was launched by Iraqi security forces targeting IS sleeper cells in the outskirts of Saladin province and the west of Diyala and Anbar provinces (Asharq al-Awsat, 4 May 2020). While this operation is expected to at least temporarily contain IS, the resumption of demonstrations, particularly in the south, may soon preoccupy the security forces.

There has also been an increasing number of clashes in northern Iraq between the Turkish military and the Kurdistan Workers Party (PKK). A total of 12 airstrikes were carried out by the Turkish air force last week. Clashes with the PKK also increased on the other side of the border in Turkey, with a total of eight engagements reported in Sirnak, Kars, and Bitlis provinces.

Furthermore, for the third week in a row, the Kurdish group, the Children of Fire Initiative, carried out multiple arson attacks in Turkey in a campaign similar to one they launched last year (TRT World, 26 August 2019). These attacks are reportedly meant as a rejection of the state and the ruling Justice and Development Party (AKP).

In Yemen, the coronavirus has continued to spread since the first case was confirmed in Hadramawt on 10 April. Last week, an additional five cases were confirmed in Aden including two deaths, prompting a number of hospitals to close due to the lack of protective equipment for health workers (Asharq Al Awsat, 2 May 2020). In response to the outbreak, Aden governorate imposed a curfew and closed all ports of entry as well as public gathering places. Other regions in western Yemen and its western coast have imposed limitations on travel, especially to and from Aden governorate. At the same time, the World Food Programme announced that it halved food aid distribution to areas mostly under Houthi control starting 1 May as funding sources have dried up (Mareb Press, 29 April 2020).

The declaration of self-administration by the Southern Transitional Council (STC) has been greeted by a mixture of official rejection and general local approval throughout South Yemen. Governors of Al Mahrah, Abyan, Shabwah, Hadramawt, and Socotra reportedly issued rejections within hours of the STC declaration (Aden al Ghad, 26 April 2020), whereas the governor of Lahij did not reject the declaration until 27 April 2020 (Al Masdar, 27 April 2020). Despite the official rejection in Hadramawt governorate, the STC led public protests in support of the declaration in six different cities, including two in Al Mukalla City. Likewise, in a number of the governorates that rejected the declaration, local security forces and tribal coalitions announced support for STC, in contrast to the official response (Aden al Ghad, 27 April 2020). Clashes over the island of Socotra broke out between pro-STC forces and joint pro-Islah and pro-Hadi forces until a Saudi intervention allowed the pro-Hadi and pro-Islah elements to regain control. Saudi aircraft conducted flashbomb strikes on the island, marking the first time aircraft attacked Socotra during the civil war.

In Syria, regime shelling continued in the Greater Idleb area. Along the new frontlines, Turkey and Russia conducted joint patrols on the M4 highway, prompting protests by locals against these joint measures. Turkish forces reportedly opened fire at protesters killing two. Clashes between Turkish forces and Hayat Tahrir al Sham (HTS) took place on one side of the highway, leading to reported HTS fatalities. Furthermore, infighting among groups of Syrian National Army troops broke out in several locations, triggered by various disputes. These clashes only further exacerbate insecurity in these areas.