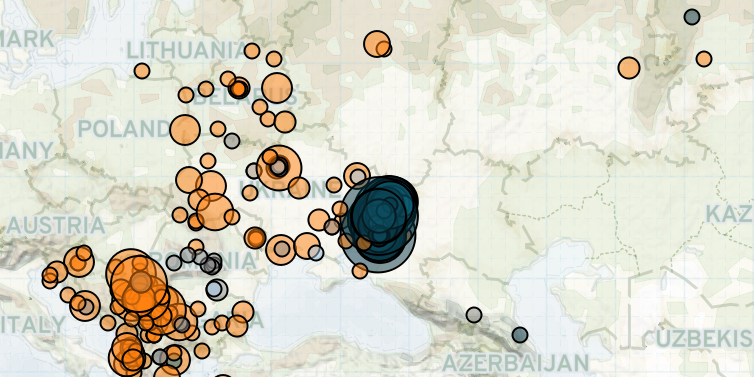 Owners and employees of small transport companies protested in nearly a dozen Croatian cities over not being able to work due to coronavirus lockdown measures.

Anti-government demonstrations continued to be held from balconies in several dozen cities in Serbia. Some demonstrators took to the street after the coronavirus curfew was lifted, and in one case demonstrators clashed with the Health Minister and several MPs from the ruling Serbian Progressive Party (SNS) outside parliament (Balkan Insight, 8 May 2020). Demonstrators accuse the government and ruling party of forming a dictatorship under President Aleksandar Vucic and oppose the new election date set for 21 June, which they consider to be too soon.

Demonstrations increased in Albania to nearly a dozen, with various labor groups demanding government aid and the reopening of businesses to ensure their livelihoods. On two occasions, police intervened with force when demonstrators turned against Prime Minister Edi Rama, calling the extension of the state of emergency authoritarian and dictatorial (Exit Albania, 8 May).

Demonstrations in Greece increased in the wake of eased coronavirus restrictions on public gatherings. Various labor groups affected by coronavirus measures protested for government support. Protesting restaurant owners set up empty chairs symbolizing business lost to coronavirus measures (The National Herald, 7 May 2020). Other protests were held against a controversial environmental bill and over education reforms.

In Crete, far-left and far-right groups clashed over migration (Efsyn, 5 May 2020). In the north of Greece, far-right activists rioted to prevent the housing of migrants in hotels in the area. In Athens, youth and anti-establishment groups rioted and clashed with police over the ban on public gatherings (Ekathimerini, 6 May 2020; Ekathimerini, 9 May 2020).

Increased tensions are reported in the airspace off the coast of Cyprus, with Russian fighter aircraft, involved in warfare in Syria, intercepting US surveillance aircraft in what are described as “dangerous manoeuvres” (Philenews, 7 May 2020).

Communities in the northern part of Romania protested against illegal logging in the neighboring national park (Digi24, 7 May 2020; Digi24, 5 May 2020).

Protests spiked in Belarus with protesters in several cities demanding the release of a popular blogger, as well as the resignation of President Lukashenka. Police intervened in the unsanctioned rallies, arresting at least 55 protesters and calling in 120 citizens for questioning (Viasna, 9 May 2020). Protests also were held in several cities over environmental issues and the car-battery plant in Brest, with anti-Lukashenka slogans reported in several of these protests (Charter-97, 4 May 2020).

In Russia, only several demonstrations took place amid the ongoing lockdown. Protests were held by relatives of inmates of a penal colony in Angarsk that was rocked by riots last month (RFE/RL, 4 May 2020), and by relatives of workers at a gas field in Yakutia where employees were diagnosed with coronavirus (Novaya Gazeta, 6 May 2020).

In Ukraine, entrepreneurs continued to protest for permission to open their businesses during the coronavirus lockdown (Unian, 6 May 2020), while health workers demanded better pay for their work (24 Channel, 4 May 2020). Moreover, people staged demonstrations across the country against the possible arrest of an activist who had killed an attacker in self-defense in May 2018 (Ukrinform, 7 May 2020).

In Donbas, fighting between Ukrainian government forces and separatist rebels continued at similar levels compared to the week prior, with 132 armed clashes and 167 shelling incidents resulting in one reported fatality.