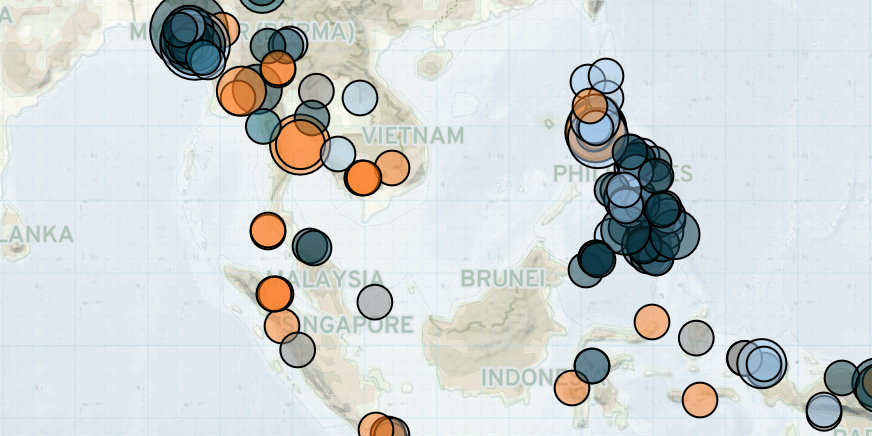 In Southeast Asia, key developments last week include: clashes in Myanmar after rebel-run coronavirus efforts were threatened by the military; a retaliatory attack by separatists against state forces in Thailand; violence in the Bangsamoro region of the Philippines; and coronavirus related events in Thailand and Indonesia.

In Myanmar, clashes continued between the Myanmar military and the United League of Arakan/Arakan Army (ULA/AA) last week. The clashes come as the military declared a unilateral ceasefire until the end of August. The ceasefire leaves out the ULA/AA; the military claims that the group’s new “terrorist” designation prevents its inclusion in the ceasefire. The military’s ceasefire is unlikely to have an impact on the ongoing fighting in Rakhine and Chin states, and, in fact, it may lead to greater conflict as the military focuses its resources on fighting the ULA/AA (Irrawaddy, 11 May 2020). Since the start of 2020, the conflict in Rakhine and Chin states has intensified (for more on this, see this recent ACLED report).

Prior to the ceasefire announcement, in Kayin state, the military burned down a hut being used by the Karen National Union/Karen National Liberation Army (KNU/KNLA) for coronavirus prevention efforts. This led to clashes between the two groups. Tensions have been on the rise in the Hpapun area since the beginning of the year as the military continues to construct a road in KNU/KNLA controlled area (Karen News, 8 May 2020).

After a clash with state forces the previous week, separatists in Thailand carried out a retaliatory attack last week in the deep south. A military ranger was reportedly killed when separatists attacked a coronavirus checkpoint in Pattani. The violence ends a period of calm in the region after the Barisan Revolusi Nasional Melayu Patani (BRN) announced in early April it would cease all activities in order to allow for a focus on coronavirus prevention efforts (Benar News, 4 May 2020).

Meanwhile, the Philippine government recently shutdown ABS-CBN after its license expired; the media outlet has been critical of President Duterte (CNN, 6 May 2020). The shutdown led to a handful of protests last week in the country.

Finally, coronavirus related events were reported in Thailand and Indonesia last week. Students in Thailand demonstrated, calling for a more inclusive government-run financial program to address the economic fallout from the coronavirus. In Indonesia, while students were protesting an issue unrelated to coronavirus, they were arrested for violating measures to prevent gatherings due to the pandemic.