State Atrocities in the Sahel: The Impetus for Counterinsurgency Results is Fueling Government Attacks on Civilians

After eight years of conflict in the Sahel, the international community remains primarily focused on the two main jihadi militant groups driving the sub-regional insurgency in Mali, Burkina Faso, and Niger: the Al Qaeda-affiliated Jama’at Nusrat al-Islam wal-Muslimin (JNIM) and the Islamic State in the Greater Sahara (ISGS). The reality on the ground is far more complex. While jihadi groups are the main contributors to the violence, community-based militias and government forces often perpetrate equally deadly attacks (Bloomberg, 2019). ACLED data show that abuses by government forces are inherent to prevailing conflict dynamics in the central Sahel, and these actors routinely commit atrocities with impunity. Reports of such violence are now simultaneously emanating from all three G5-Sahel countries confronted by the sub-regional insurgency (Orient XXI, 2020), and it is increasingly clear they can no longer be ignored. If these dynamics are left to persist, the creeping militant expansion will certainly carry on with them (ACLED, 2019).

Ahead of the end of the rainy season in August 2019, ISGS and JNIM – in tandem – launched an offensive in the tri-state border area, also known as the Liptako-Gourma. It was a campaign in which military outposts were overrun like dominoes, forcing government troops to tactically withdraw from the border areas and leave previously contested territory under militant control. These developments underscored the lack of cooperation and coordination between the constituents of the struggling regional G5-Sahel force, for years promoted as an effective coalition to address the jihadi threat (Ouest-France, 2018). Amid mounting popular discontent in Mali over the presence of foreign forces as Malian soldiers were killed in scores (RFI, 2020), French president Emmanuel Macron summoned the leaders from the G5-Sahel countries to clarify their positions on France’s role in the Sahel. During the summit convened on 13 January 2020 in the French town of Pau, a roadmap was outlined to counter the jihadi onslaught (The Conversation, 2020). France decided to deploy 600 supplemental troops to its Barkhane mission (Le Monde, 2020), ensued by the official launch of ‘Takuba’, a task force gathering special forces from several European countries aimed at shoring up Barkhane and Malian forces in the fight against jihadi groups (Ouest-France, 2020). The primary focus of the counter-offensive was to be ISGS, now the ‘Greater Sahara’ faction of the Islamic State West Africa Province (ISWAP). Although the group carried out some of the deadliest attacks targeting security forces to date, this announcement largely neglected the comparable threat posed by its Al Qaeda counterpart, JNIM (Liberation, 2019; DW, 2020).

In the wake of the Pau meeting, state violence targeting civilians increased in all three countries as local and foreign forces stepped up their operations. If the Pau Summit did not encourage civilian targeting, it evidently appears to be a direct consequence (see graph below). 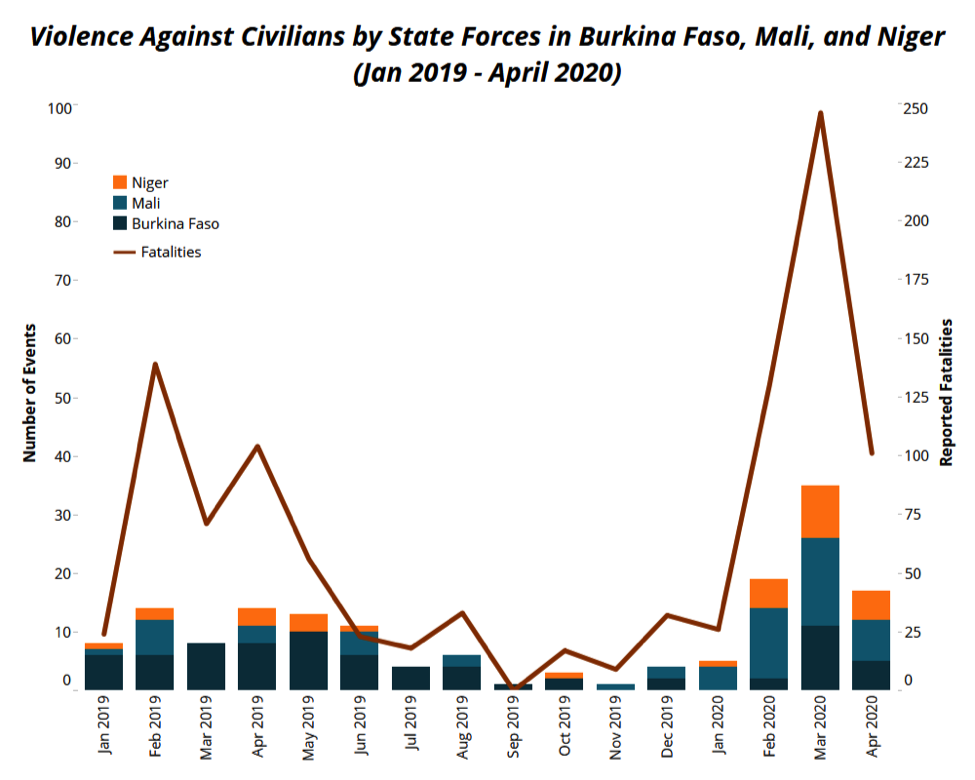 Amid the surge to regain momentum against the jihadi groups, reports of abuses by state forces have accumulated. In Burkina Faso, Human Rights Watch documented how soldiers arrested and summarily executed 31 men in the town of Djibo on April 9 (HRW, 2020). On the day of the extrajudicial killings, JNIM fighters had attacked a military camp in Sollé, in the adjacent Loroum Province, albeit at a 50-kilometer distance. Notably, the town of Djibo was already under militant blockade, limiting access to food and other essentials such as fuel and medicine (WFP, 2020). Four weeks later, security forces raided the Mentao Refugee Camp, reportedly wounding at least 32 people and giving the refugees an ultimatum to leave “within the next 72 hours or face death” (UNHCR, 2020). Earlier that day, JNIM militants ambushed a gendarmerie patrol in nearby Gaskindé. The Burkinabe minister of communication defended the Mentao events, stating that security forces pursued militants “who ran away into the camps” and responded to “the resistance of certain refugees” (Fasozine, 2020). Both events appear to fit a pattern of reprisal carried out by state forces in the wake of militant attacks.

In neighboring Niger, security forces reportedly executed or disappeared 102 members of Tuareg and Fulani pastoralist communities over the course of  a week in the areas of Inates and Ayorou. These reports were accompanied by the discovery of mass graves. Additional attacks on civilians by Nigerien forces were reported in other parts of Tillabery including Ouallam and Torodi (Mondafrique, 2020), as well as in the Menaka Region on the Malian side of the border (UN MINUSMA, 2020).

In Mali, a recent report by the Human Rights Division of the United Nations’ peacekeeping mission MINUSMA documented 101 summary executions attributed to Malian security forces, primarily targeting the Fulani community in the central regions of Mopti and Ségou (Le Monde, 2020). The report also detailed evidence of torture and enforced disappearance. In many cases, there are no discernible causal links between incidents of state violence targeting civilians and militant action. For example, two recent and particularly deadly JNIM attacks against the Malian army in the Gao Region did not result in reprisals (Opex 360, 2020), while the assassination of a member of the National Guard in the town of Gossi triggered security forces to lash out against the population by burning motorbikes and property (Inkinane on Twitter, 2020).

Certain areas are also more prone to state-sanctioned violence than others (see map below). While linked to broader systemic problems within the region’s security forces, abuses can often be linked to specific units in different areas. A 2018 Human Rights Watch report identified two specialized army and gendarmerie units known as GFAT (now referred to as GFSN) and USIGN, operating in northern Burkina Faso as frequent perpetrators of attacks on civilians (HRW, 2018). Similarly, in Mali, abusive behavior in Mondoro has often been attributed to the National Guard (HRW, 2017, 2019). A meeting was set to be held on 14 May at the United Nations’ Security Council on allegations of severe human rights abuses by the concerned G5-Sahel countries. However, the meeting was annulled by Niger, a non-permanent member state of the Council, which faces accusations alongside Mali in the aforementioned report of MINUSMA’s Human Rights Division (Africa Intelligence, 2020). 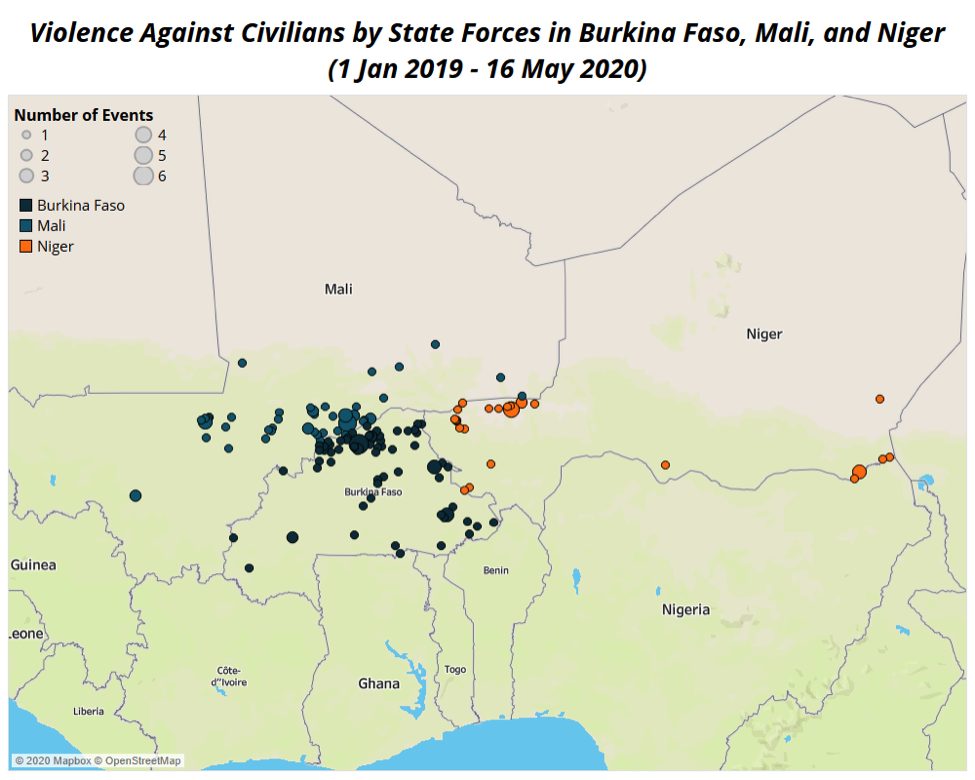 A multitude of factors can explain the surge in state violence targeting civilians. For one, there is a demand for counterinsurgency results following a steady rise in militant mass-casualty attacks. Forced to withdraw from the borders, security forces may seek vengeance  when returning to contested areas — an urge aggravated by years of stigmatization of pastoral communities and a perception that they are complicit in the insurgency (The Conversation, 2020). The presence of poorly trained and equipped forces  in areas plagued by insecurity only elevates the risk of abuses. Moreover, a prevailing culture of impunity within the security forces ultimately provides state personnel with carte blanche to perpetrate atrocities.

Broad-based military operations accompanied by gross human rights violations alienate local populations and undermine any short-term gains they might achieve (ACLED, 2019). When these operations end and security forces leave, militants inevitably fill the void and tighten their grip (Sidwaya, 2020). If  current dynamics persist, and local and international forces fail to establish a permanent presence in contested areas that can bridge the gap with key segments of the population, it will enable militant groups to continue to pose as ‘community protectors’ and further consolidate their control.