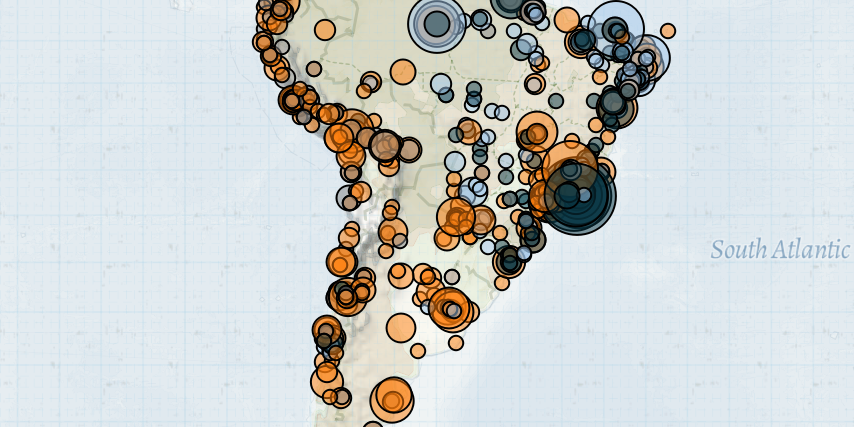 Last week in South America, key developments include: demonstrations around the region over the economic impacts of the pandemic, as well as protests led by health workers; clashes involving the National Liberation Army (ELN) in Colombia; demonstrations in Bolivia calling for general elections; intensified indigenous militia activities in Chile; and demonstrations both for and against quarantine measures in Brazil, as well as continued armed clashes between criminal groups and state forces.

The economic impact of the coronavirus pandemic led to several protests in South America last week. Demonstrations continued in Colombia with citizens calling for authorities to provide financial aid and basic goods. In Venezuela, citizens demanded the distribution of potable water, fuel, and electric power amidst an economic crisis worsened by the pandemic. In Ecuador, students took to the streets after President Lenin Moreno announced a cut to the public universities’ budget. Following demonstrations reported in the country’s main cities, the Supreme Court ordered the Ministry of Finance to refrain from making any reductions that would affect the educational institutions. In Argentina, workers from several sectors, including teachers, demanded the payment of delayed wages. The United Nations Economic Commission for Latin America and the Caribbean (ECLAC) recently warned that the pandemic will cause the worst economic contraction in the region’s history, leading to a rise in unemployment and poverty rates (UN News, 21 April 2020).

Meanwhile, health workers continued to protest across the region, with events reported in Argentina, Brazil, Peru, and Venezuela. The protesters call for better working conditions and proper protective equipment as they treat patients infected with the coronavirus.

In Colombia, in Norte de Santander department, one ELN member was killed during an armed clash with military forces. In Bolívar department, soldiers and police officers bombed an ELN camp, killing one suspected member. Despite calls for an extension from the Colombian government, the ELN refused to prolong its one-month unilateral ceasefire amidst the pandemic (Colombia Reports, 30 April 2020). For more, see ACLED’s recent report on COVID-19 ceasefires.

In Bolivia, supporters of former President Evo Morales and his political party, the Movement for Socialism (MAS), held several demonstrations demanding new general and presidential elections. In Cochabamba city, more than 200 demonstrators blocked the K’ara K’ara city dump for several days, while attacks against journalists and health workers were reported in the area. Due to the pandemic, the Supreme Electoral Tribunal postponed the elections, previously expected to go ahead on 3 May, to a tentative date between 7 June and 6 September 2020.

In Chile, tensions remained high in the Araucania and Biobío regions, amidst continuing attacks led by suspected indigenous militias. Two attacks were reported in Ercilla municipality, as a group attacked the local police station and the house of a businessman and landowner. No casualties were reported. In Pidima and Pua municipalities, suspected Mapuche militiamen also attacked two logging trucks, a bus from a forestry company, and the house of a businessman. Truck drivers from forestry companies announced their intention to reduce the traffic of vehicles in the area due to increasing violence. Additionally, several farmers’ associations demanded the resignation of the Minister of the Interior and Public Security over mismanagement of the Mapuche land conflict in the south of the country.

In Brazil, tensions within the government rose after the Health Minister resigned on 15 May following less than a month in the position. The former minister disagreed with President Jair Bolsonaro by refusing to loosen up quarantine measures and rejecting the use of the chloroquine drug as a treatment for coronavirus patients without severe symptoms. Following the episode, several pot-banging protests against the President were recorded in the country’s main cities. Although the number of confirmed deaths in Brazil surpassed 15,000 last week, the President continues to openly oppose any sort of business restrictions during the pandemic. Protests and motorcades calling for an end to social distancing measures and the re-opening of business continued to be reported across the country.

The number of clashes between armed groups and state forces declined in Brazil, although Military Police operations continued to be carried out at similar rates in the state of Rio de Janeiro. In the North zone of Rio de Janeiro city, a joint Military and Civil Police operation to seize a drug trafficking group cache in the Alemão Complex led to 13 deaths, including civilians. The intense shooting reported during the incursion, which lasted for six hours, sparked outcry across the country over state violence in impoverished neighborhoods (Ponte Jornalismo, 15 May 2020). According to the Police, one officer was injured and five drug trafficking suspects were killed – indicating that the remaining eight fatalities were civilians. Locals reported that police officers refused to retrieve the bodies, leaving the task to the residents. The event sheds light on the challenges communities affected by violence face amidst the pandemic. As citizens follow the authorities’ orders to stay indoors, favela residents face a double threat of violence and disease. They are still at risk as state incursions on their communities have not been halted (The Guardian, 18 May 2020).

The number of attacks on civilians perpetrated by drug trafficking groups and police militias decreased again compared to the previous week, with 20 reported events across the country.

Bhavani Castro is the South America Research Manager at ACLED. She holds a M.A. in International Security from the Institut d´Études Politiques de Paris – Sciences Po Paris, and a B.A. in International Relations from University of São Paulo. Her research interests include ethno-nationalist conflicts, communal violence, and non-state armed groups and gender. She is fluent in Portuguese, English, and French and is based in São Paulo, Brazil.
21 May 2020
Share
TweetShare on Twitter Share on FacebookShare on Facebook Share on LinkedInShare on LinkedIn