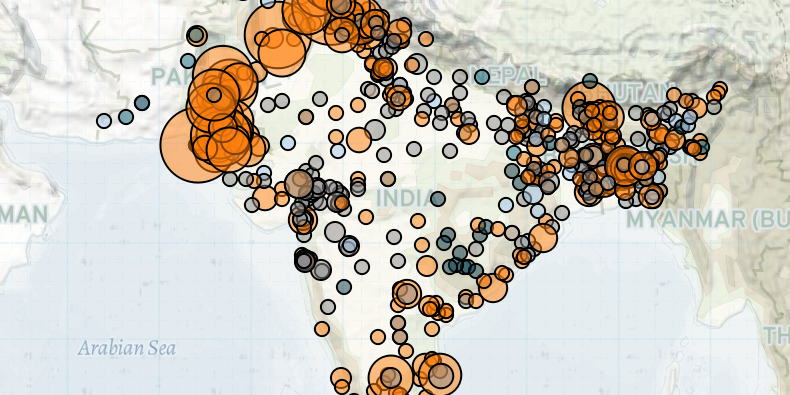 Key trends in South Asia last week include: armed clashes between security forces and domestic rebel groups in India; and communal violence between Hindus and Muslims in India and Bangladesh.

In India, armed clashes between Naxal-Maoist rebels and security personnel continued last week. One police constable was killed and another injured during encounters in the states of Chhattisgarh and Madhya Pradesh. Reports indicate that Naxal-Maoist rebels are strengthening in numbers and have launched massive recruitment campaigns in several districts of Madhya Pradesh (Times of India, 16 May 2020). The recruitment campaigns are targeting jobless laborers who have returned home due to the nationwide coronavirus lockdown (Times of India, 16 May 2020).

Elsewhere in India, a civilian was killed when military personnel shot at the National Socialist Council of Nagaland-Isak Muivah (NSCN-IM) cadres in Arunachal Pradesh. Human rights organizations disputed the claim and the Arunachal Pradesh government has ordered a judicial inquiry to investigate the incident (Times of India, 18 May 2020). The NSCN-IM is the largest militant group in the northeast and a ceasefire agreement has been in effect since 1997. The government of India and NSCN-IM signed two subsequent agreements in 2015 and 2019, but a final peace agreement has been stymied by disagreements over several issues including a separate flag and a constitution (India Today, 5 May 2020). Meanwhile, in Jammu and Kashmir (J&K), armed clashes between security forces and domestic rebel groups decreased last week. A police constable was killed when militants attacked a security patrol in Kulgam district.

Last week, violent demonstrations and mob violence over coronavirus-related lockdown restrictions were reported in India and Bangladesh. In several states across India, including West Bengal, Uttar Pradesh, Gujarat, and Maharashtra, locals clashed with security personnel enforcing the lockdown. In Maharashtra, an armed mob attacked a police patrol injuring three police personnel after the patrol interrogated them about the lockdown and social distancing violations. In J&K, a mob pelted stones at police personnel as they attempted to disperse religious gatherings at mosques. Across India, migrant workers clashed with security forces, demanding they be allowed to travel back to their home states. In Gujarat, around 1,000 migrant workers pelted stones and clashed with police after the local administration was not able to make arrangements to repatriate them (Times of India, 14 May 2020). Similarly, in Madhya Pradesh, hundreds of migrant laborers pelted stones at police after finding out there were no more buses to repatriate them to their home states. In Bangladesh, thousands of readymade garment factory workers demanding arrears, Eid bonuses, and reinstatement of jobs, clashed with police in Dhaka and Rajshahi division.

Communal violence was also reported in India and Bangladesh. In India, Hindu and Muslim groups clashed for several days in West Bengal state, after Muslims were barred from using public toilets following reports of coronavirus cases in their neighborhood. Reports indicated that the violence was coordinated and systematically targeted at the Muslim community (Wire, 16 May 2020). Police filed cases against two members of parliament belonging to the ruling Hindu right-wing Bharatiya Janata Party (BJP) for allegedly inciting violence during the incident (Indian Express, 18 May 2020). The BJP has been known to incite inter-communal conflict between Hindus and Muslims, which has led to incidents like the deadly Hindu-Muslim riots in Delhi earlier this year (Al Jazeera, 11 March 2020). In Bangladesh, locals attacked a shop belonging to a Hindu owner and clashed with police in Barisal division during a demonstration against an anti-Muslim social media post attributed to the shop owner. At least 10 people were injured during the incident. In recent years, social media posts and fake online news have triggered several clashes in Bangladesh (Deutsche Welle, 1 November 2019). In October 2019, four people were killed in a clash with police when hundreds of people demonstrated against a derogatory, anti-Muslim Facebook post, allegedly written by a Hindu individual (Deutsche Welle, 1 November 2019).

In another development, amid warnings of storm-surge flooding due to Category 3 Tropical Cyclone Amphan, mass evacuation is underway both in India and neighboring Bangladesh. The evacuation and housing of affected residents in shelters may lead to an increase in disorder, as people fear sharing confined space with others due to the surge of coronavirus cases in the region (Washington Post, 19 May 2020).

Ashik KC is the US Research Manager at ACLED. He holds an MA in Peace and Conflict Research and a PhD in Political Science. His research interests include ethno-territorial conflicts and the role of regional organizations in conflict resolution.