Everlasting or Ever-Changing? Violence Along the Kyrgyzstan-Tajikistan Border

In the volatile region of the Ferghana valley, where the borders of Tajikistan, Kyrgyzstan, and Uzbekistan converge (see map below), violent confrontations between locals and state forces have been a longstanding concern. Disputes between Kyrgyzstan and Tajikistan are particularly frequent as almost half of the 971-kilometer-long border territory remains contested, creating challenges for local populations hoping to address infrastructural and economic issues in the region. Disagreements over the connection of Tajikistan’s fertile Vorukh exclave to the mainland only adds to the disorder. 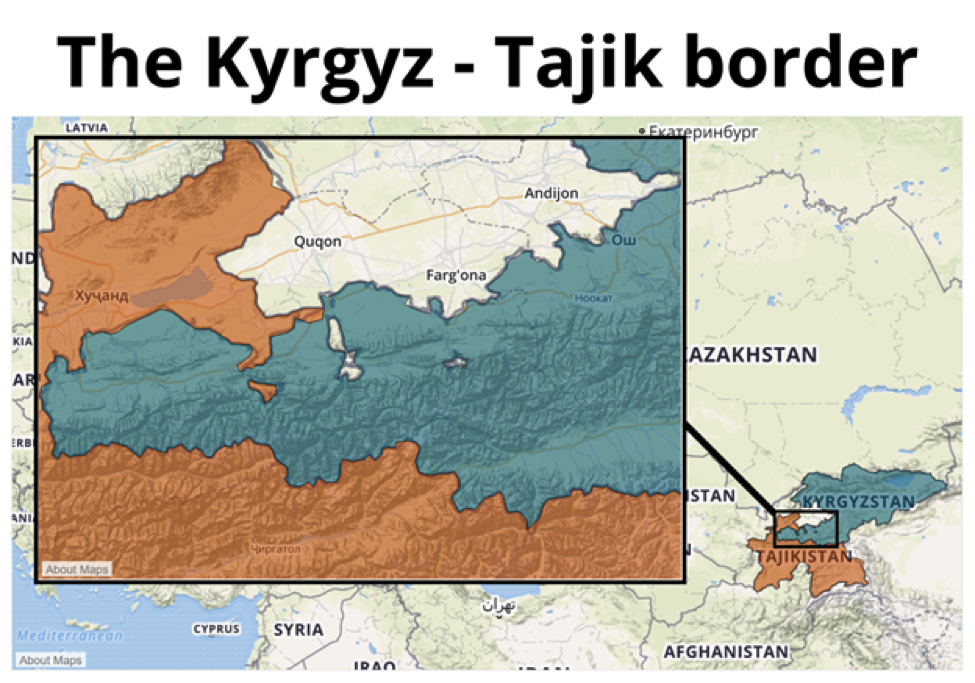 Contention in the borderland has been ongoing for decades, mainly over the use of land and water resources, as local livelihoods rely on agriculture and livestock. Throughout the last century, the border communities have occasionally managed to establish a delicate balance, preventing disagreements from escalating into open conflict (Reeves, 2014). Some historical studies have found that following the separation of Kyrgyzstan and Tajikistan from the Soviet Union in 1991, patriotic discourse and an emphasis on ethnicity exacerbated existing disputes, as control over scarce arable land became a symbol of national sovereignty (Matveeva, 2016; Murzakulova, 2017). Both states claimed rights to the border areas based on contradictory interpretations of historical evidence, halting border demarcation work and the development of infrastructure in the region, further complicating the situation and fueling tensions (The Diplomat, 2 August 2019).

As the problem remains unresolved, ACLED continues to record intermittent clashes along the borderlines. With the onset of the COVID-19 pandemic, both the Tajik and Kyrgyz governments have mobilized border patrols to respond to the public health emergency, distracting from still-simmering disputes. Violence has continued in the region despite the coronavirus outbreak, with reports of fresh clashes in recent weeks (24.kg, 6 May 2020; Kabar, 9 May 2020; RFE/RL, 1 June 2020).

This report reviews data collected by ACLED on the border conflict since 2018, tracing key trends in violent confrontations in the region and assessing efforts made by the Tajik and Kyrgyz governments to reduce fighting. The analysis benefits from new supplemental data that bolster coverage of the region through use of select, trusted new media sources, which offer more detailed information about violence on the remote Kyrgyz-Tajik border region.

Since the start of 2018,1This is when ACLED coverage of Central Asia currently begins. Please see a full list of ACLED country and time period coverage here. mob violence has constituted the majority of political violence recorded in the Kyrgyz-Tajik border region, primarily stemming from disputes over access to water and land resources (in orange in figure below). In un-demarcated border areas, clashes sporadically break out as people from either side accuse the other of land grabbing, though the de facto use of this land has long been exercised by farmers from both countries (Kurmanalieva, 2018). 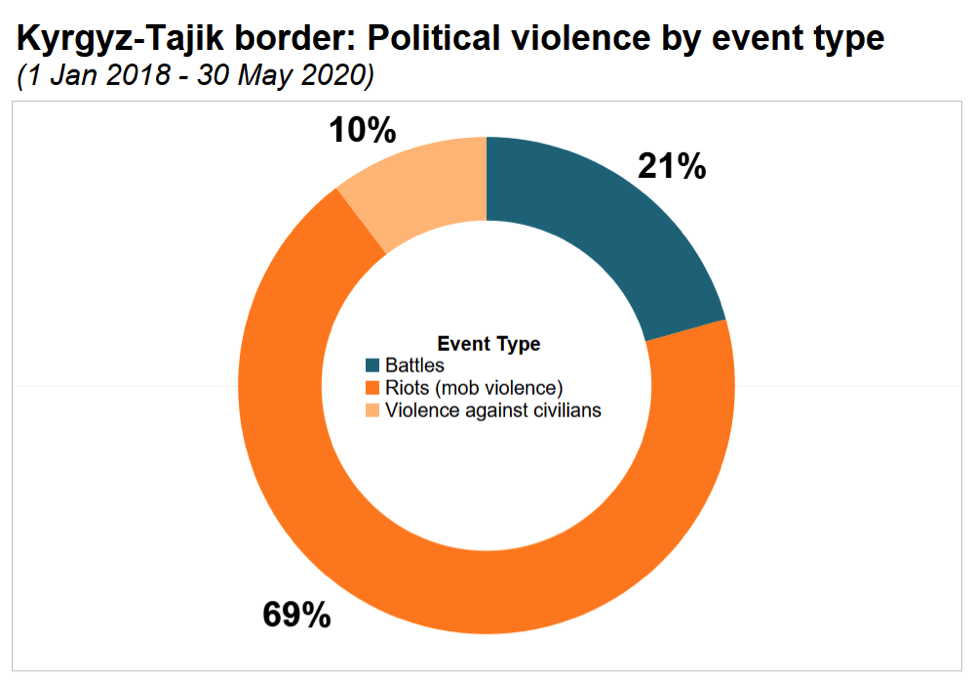 Between January 2018 and May 2020, most confrontations have taken place between Tajik villagers in the Vorukh exclave and Kyrgyz villagers in the surrounding villages, notably in Ak-Sai and Kok-Tash. This region is labeled in the map below for clarification. Skirmishes and bouts of stone throwing are common, with altercations sometimes escalating to the use of hunting rifles and other firearms, resulting in casualties and prompting intervention by the border guards. 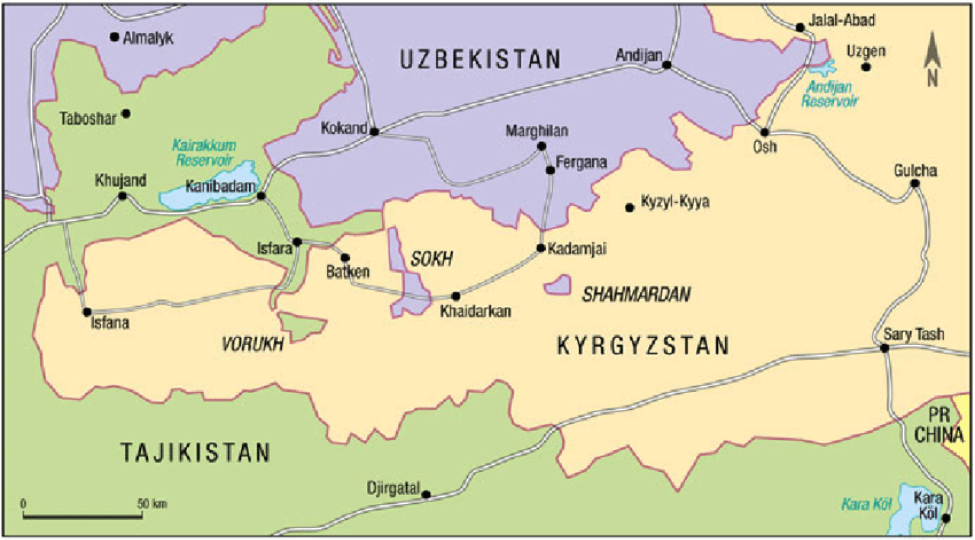 Violence has also broken out over access from the Vorukh exclave to the Isfara region in Tajikistan, and the connection of Kyrgyz villages around the Vorukh exclave to the Kyrgyz district of Batken (labeled on map above). Currently, Kyrgyz residents must pass through Tajikistan’s Isfara region to connect to Batken, while Vorukh residents use the only road to Isfara passing through Kyrgyz territory.

The construction of a new road by Kyrgyzstan connecting Kyrgyz villages to the Batken district has also proven controversial, raising tensions between the Kyrgyz and Tajik communities. The road bypasses Vorukh, offering an alternative to the existing road through the exclave. Some in Tajikistan have worried that Kyrgyz authorities could block the existing road, threatening  the Vorukh exclave’s connection to the mainland; meanwhile, residents of Kyrgyzstan fear passing through Vorukh due to intermittent attacks by Tajik mobs (CABAR, 14 March 2019). The construction of the road is frequently hindered by land disputes along the route, triggering existing enmities between the communities.

The continuing roadwork prompted a series of riots and clashes in 2019. Violence flared up between the residents of Vorukh and Batken, occasionally including exchanges of gunfire and the involvement of border patrols. In July 2019, clashes between Tajik and Kyrgyz communities lasted three days with tens of casualties, including one reported fatality. As the clashes spilled over to several villages along the border, Kyrgyz authorities evacuated 150 residents from Ak-Sai village near the Vorukh exclave in an effort to deescalate the situation (RFE/RL, 23 July 2019).

Riots and clashes often impact nearby civilians. Civilians were targeted in nearly one-third of all disorder recorded in the region (see figure below). They are regularly displaced due to rising tensions, injured or killed in exchanges of gunfire, or subject to property damage and vandalism. Cars are frequently pelted with stones on the contested road, and in one case a house was burned down during armed clashes in the Chek area of Kok-Tash village in 2020 (RFE/RL, 16 May 2020). 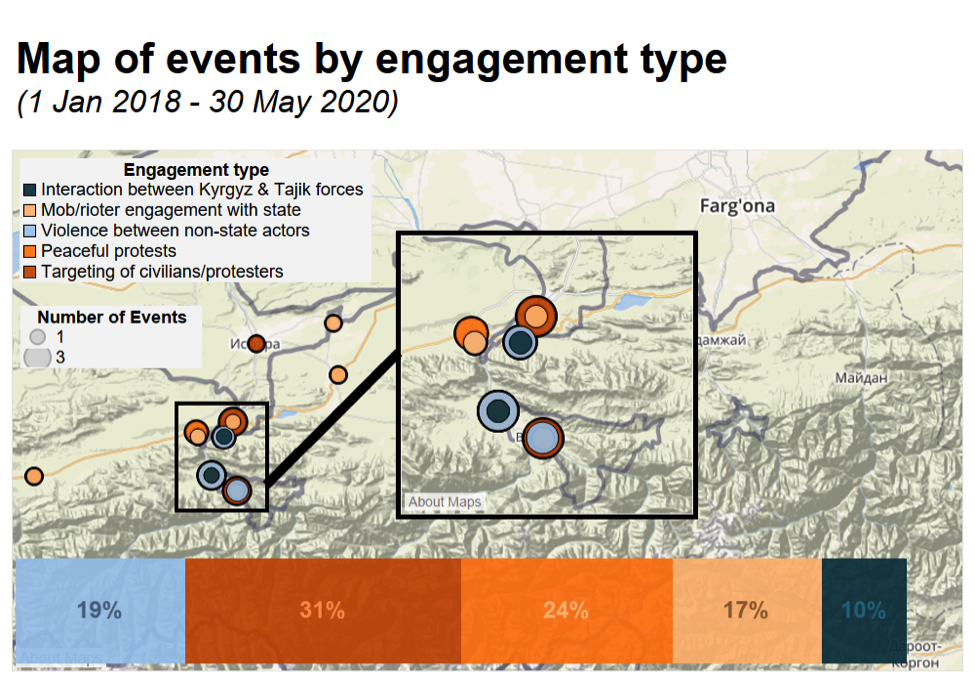 Clashes Between Border Forces and Government Efforts to Reduce Violence

Border guards of Kyrgyzstan and Tajikistan are often drawn into ongoing engagements between residents, especially when weapons are used. This leads to sporadic confrontations between state forces as well, followed by diplomatic engagements between the governments of both countries renewing their intentions to solve the conflict. Since 2018, the Tajik and Kyrgyz governments have come to two important agreements on the engagement of the border patrols. However, the data show that these efforts have mostly failed to reduce the violence (see figure below). 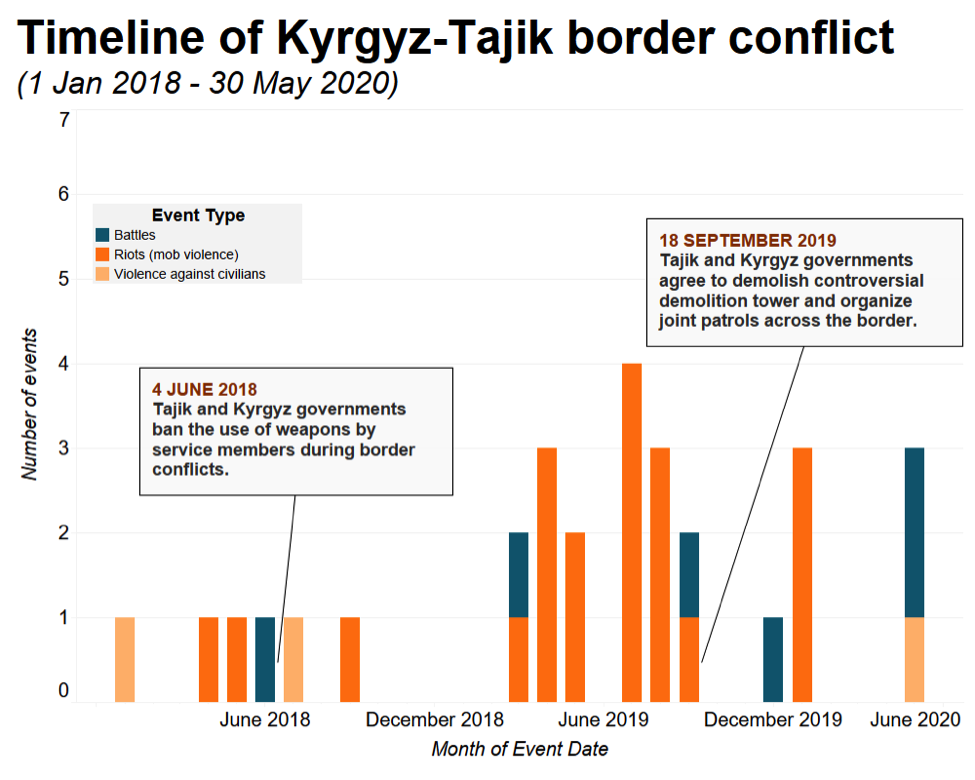 In June 2018, following an armed engagement between the Tajikistan Border Service and Kyrgyzstan’s Frontier Force in a disputed area in the Batken region (RFE/RL, 5 June 2018), both governments banned border guards from using weapons unless there is a clear threat to their lives (labeled on the graph above). They further agreed that heads of border units should not take any action until border representatives of both Kyrgyzstan and Tajikistan arrive at the scene. The agreement was broken in July 2018, when another clash broke out between the Tajik and Kyrgyz border guards over the use of the road passing through Vorukh. Border representatives touched base immediately, ensuring the return of the Kyrgyz guards before the situation could escalate further, partially maintaining the agreement in place (Kabar, 21 July 2018). No military engagements were reported from October 2018 to February 2019 (see figure above).2Ongoing ACLED data supplementation may help elucidate previously unreported events during this time period.

Nevertheless, another engagement took place in September 2019 over the presence of a Kyrgyz observation tower in a non-demarcated border area, provoking clashes between the Tajik and Kyrgyz communities, and eventually between the border patrols (labeled on the graph above). Exchanges of gunfire resulted in the death of one Kyrgyz border guard and three Tajik border guards. Although both parties provided conflicting narratives, the crisis was averted when the Kyrgyz and Tajik Prime Ministers came to an agreement on the demolition of the observation tower (Asia Plus, 18 September 2019). Following that, direct military engagement was not reported until May 2020, although riots continued to take place at varying levels (in orange in figure above). On 8 May 2020, Tajik and Kyrgyz villagers clashed after both sides claimed rights to a plot of land in a non-demarcated territory near Kok-Tash village in Batken region. Kyrgyz border guards intervened by firing warning shots, reportedly injuring two Tajik citizens. In response, Tajik border troops fired mortar shells on the area, injuring three Kyrgyz border guards. The story unfolded in a similar way: both sides first provided conflicting statements and blamed each other, followed by another meeting between government officials renewing their commitment to an effective conflict resolution process (Kabar, 11 May 2020).

Intergovernmental agreements have often decreased violence in the Kyrgyz-Tajik border region for a short time, and the involvement of state forces has helped to prevent further aggravation by violent mobs. However, the socio-political disputes underlying the conflict remain under-addressed by both states, making further military engagements inevitable.  Though the Kyrgyz and Tajik governments announced a new plan to swap lands along the border segment that may provide a more practical framework for settling disputes (RFERL, 15 January 2020), it is unclear if the transfer will sufficiently reduce tensions, as no information has been provided about coordination with local communities (15 January, The Diplomat).

Resolving the persistent border conflict requires an approach that grapples with the deeper political realities of the region. The conflict’s intransigence may be partly linked to the political traditions in both countries. Tajikistan’s restrictions on independent media prevent public mobilization around the issue, ensuring that any political action taken to resolve the dispute remains symbolic. Border violence, even when it results in casualties, is not always covered by Tajik media (Eurasianet, 18 September 2019). This may play a role in limiting nationwide awareness of the situation and obstructing grassroots political pressure to address it, further isolating Vorukh residents from the rest of the country. In Kyrgyzstan, some experts contend that the lack of coordination between the central and local governments has undermined efforts to maintain peace and security. This problem has been aggravated by alleged corruption within local government in the border regions (Asia Plus, 18 September 2019). Meanwhile, leaders of both countries have been criticized for underplaying the seriousness of the issue, as public acknowledgement may result in loss of support for both presidents (IWPR, 19 September 2019).

At the same time, border communities demand inclusion in these processes (CABAR, 30 March 2020). Many experts suggest that the most viable approach would involve bringing civil society, local residents, and government actors together to work collaboratively on a joint path forward, particularly in light of the insufficient military and political response thus far (CABAR, 8 April 2020; UN Women, 20 May 2020). In the absence of a more inclusive approach, the future of the Kyrgyz-Tajik borderland will likely remain uncertain, and the political violence landscape will likely remain the same.

Asena Karacalti is the South Asia Assistant Research Manager at ACLED, mainly overseeing the Afghanistan dataset.She holds a BA in Law, and an MSc in Cultural Anthropology and Development Studies from KU Leuven, Belgium. Her research interests focus on the transit experiences of migrant and refugee populations and political violence across the Middle East and North Africa. She has past experience as a lawyer and as an expert in migration and asylum organizations.She has previously worked as the Central Asia & the Caucasus, and Africa Research Manager at ACLED.
8 June 2020
Share
TweetShare on Twitter Share on FacebookShare on Facebook Share on LinkedInShare on LinkedIn