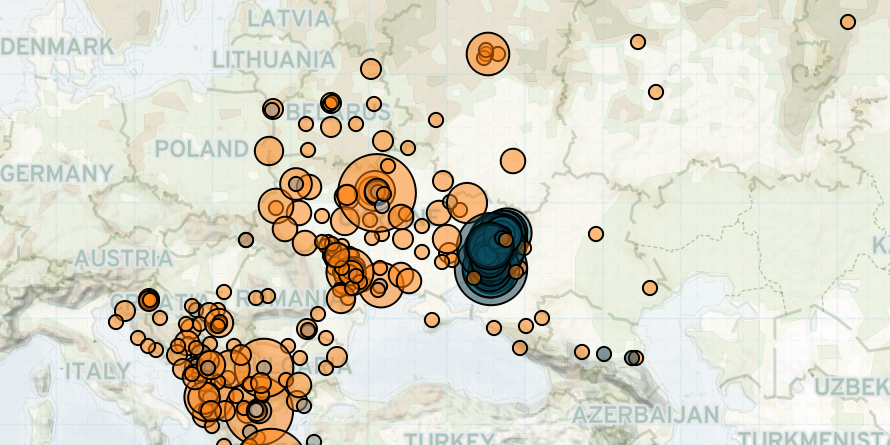 Demonstration activity last week remained at similar levels relative to weeks prior in the Balkans, Southeastern Europe, Russia, and Ukraine, yet decreased in Eastern Europe. Notable regional developments include ongoing protests against the government of Belarusian President Alexander Lukashenka ahead of the upcoming elections, solidarity rallies in Greece with the ongoing Black Lives Matter protests in the United States, and protests in Ukraine calling for the resignation of the controversial Minister of Internal Affairs Arsen Avakov.

In Albania, the rape of a schoolgirl sparked protests in several cities. Thousands of women and activists marched in the capital against sexual violence and demanded the creation of a public sex offender registry (Exit Albania, 4 June). Meanwhile, labor protests took place in Tirana and Durres, where employees in the retail industry demanded government aid.

Kosovo formed a new government, headed by Avdullah Hoti of the Democratic League of Kosovo. This was met with a protest by those who wanted the country to have an early election (Balkan Insight, 3 June, 2020). Driving school owners and instructors conducted protests demanding they be allowed back to return work, which is prohibited by measures imposed to fight coronavirus.

In Bulgaria, Revival organized a protest in support of US President Donald Trump and denounced the Black Lives Matter protests (Dnes.bg, 5 June). Parents also protested in Sofia, demanding vaccination for their children be made optional, fearing side effects of potential new coronavirus vaccines.

Meanwhile, hundreds of demonstrators in East Attica, who object to migrant hosting facilities in the area, clashed with police (To Vima, 31 May 2020). This is the latest local reaction against hosting migrants which has brought the transfer of migrants from the islands to the mainland to a standstill (Ekathimerini, 04 June 2020). In addition to several coronavirus related demonstrations, a number of other protests also occurred around various labor, social, environmental, and political issues.

In Cyprus, there were violent clashes between rival groups of migrants in Limassol and Nicosia. Hundreds protested in the capital to express their solidarity with migrants (Philenews, 31 May 2020), while others protested against racism in the aftermath of the death of George Floyd outside the United States embassy (The National Herald, 06 June 2020). Turkish Cypriots on both sides of the island continued to protest for permission to commute to their jobs, which has been impacted by coronavirus restrictions.

In Moldova, hundreds of hospitality sector workers protested in Chisinau, urging the lifting of coronavirus restrictions on their businesses, and the dismissal of the chief epidemiologist (TV8, 5 June 2020). On 31 May, hundreds of 1992 war veterans protested in Chisinau, demanding better welfare protection and the dismissal of President Dodon’s government (Agora.md, 31 May 2020).

In Romania, a significant number of restrictions on travel and public entertainment events were lifted on 1 June, but the level of protest activity remained low.

In Russia, protests in support of activist Ilya Azar and the right to peaceful assembly took place following the arrests of several activists during protests last week. Coordinated one-person protests took place against police brutality following the killing of a Yekaterinburg man by the Russian National Guard. Entrepreneurs also protested, demanding the lifting of coronavirus lockdown restrictions on their businesses.

In Belarus, thousands held electoral rallies as protests in Minsk and four other cities against current President Lukashenka and the detention of an opposition blogger.

In Ukraine, demonstrations against corruption and local issues continued across the country despite the continuing prohibition of gatherings. In at least 15 protest events, members of political parties, far-right groups, and human rights organizations demanded the resignation of the Minister of Internal Affairs over failed police reform (Radio Free Europe, 5 June 2020).

In Donbas, fighting between Ukrainian government forces and Russian-led separatist rebels continued to decrease, with 64 armed clashes and 86 shelling incidents without any fatalities reported.