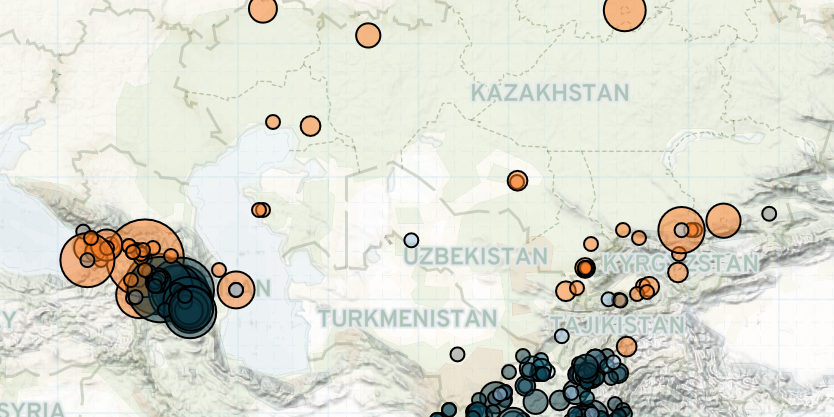 Last week in Central Asia and the Caucasus, ongoing violence and new intelligence reports once again overshadowed approaching peace talks in Afghanistan, as unidentified groups targeted civilians. Restrictions on freedom of speech and media caused unrest in Kyrgyzstan, Kazakhstan, and Georgia, while ceasefire violations continued on the Armenia-Azerbaijan-Artsakh Lines of Contact.

In Afghanistan, fighting between the Taliban and Afghan government forces continued at similar levels to the week prior, with the deadliest clashes taking place in Paktika, Kapisa, and Kandahar regions. For the second consecutive week, intense battles took place in Tagab district of Kapisa, about 100 kilometers east of Kabul. Taliban attacks forced the Afghan military to withdraw from some villages, and civilians suffered casualties as a result of the heavy clashes and shelling.

Unidentified groups continued targeting civilians as well: two judges were killed in separate attacks in Kapisa and Nijrab, while two prosecutors were killed when unknown gunmen attacked their vehicle in Kabul province. The prosecutors were part of a team supervising the release of Taliban prisoners. Still, the government did not openly accuse the Taliban, instead referring vaguely to “enemies of the peace” (AP, 22 June 2020). Later in the week, however, President Ashraf Ghani urged the Taliban to end the violence, noting that fighting continues in 15 of the country’s 34 provinces (TOLO News, 27 June 2020).

Meanwhile, the New York Times, referring to unnamed US intelligence officers, has reported that the Russian government paid bounties to the Taliban for targeting American forces in Afghanistan (New York Times, 30 June 2020). Along with increased Taliban attacks, this development has exacerbated concerns over the intra-Afghan peace talks, which are to be led by the US. American officials once again contacted the Taliban, which denied the allegation and renewed its commitment to the peace process (VOA, 30 June 2020).

In Kyrgyzstan, two significant protests took place last week after the parliament approved legislation allowing authorities to block websites without a court order and obliging companies to hand private user data to the government. Activists and rights defenders demonstrated in Bishkek city before and after the bill passed, with hundreds of people joining the latter demonstration (Eurasianet, 29 June 2020). The protesters, as well as international human rights organizations, also raised concerns that the bill did not specify which state bodies will be tasked with monitoring websites and criticized other recent legislation tightening restrictions on labor rights and civil society (RFE/RL, 30 June 2020).

Similarly, in Kazakhstan, government suppression of opposition activity on social media sparked protests in Almaty after the activist Alnur Iliashev was sentenced to three years of restricted freedom (a form of non-custodial sentence) and banned from political activities for five years (Vlast, 22 June 2020). Iliashev was detained in April 2020 after he accused the ruling Nur-Otan party of mishandling the coronavirus crisis on his Facebook account. Since then, his supporters have held sporadic protests. Meanwhile, Kazakhstan’s president introduced new coronavirus-related restrictions and replaced the minister of health amid a surge in the number of new cases (RFE/RL, 25 June 2020).

Reporters, activists, and politicians also rallied over press freedom in Batumi, Georgia last week, accusing the new director of the publicly-funded broadcaster Adjara TV of dismissing, intimidating, and blackmailing journalists. Similar protests had taken place prior to the coronavirus lockdown in March, with opponents criticizing the controversial appointment as political, due to its alleged backing by the Georgian Dream ruling party (Civil Georgia, 27 June 2020). Separately, protests calling for solutions to infrastructural problems, such as poor roads and water pipes, were held in multiple regions. As Georgia emerges from lockdown with the lowest number of confirmed coronavirus cases in the Caucasus (JAM News, 28 June 2020), demonstrations continue to increase across the country.

Meanwhile, ceasefire violations between Armenia and Azerbaijan rose compared to weeks prior. Azerbaijan’s Ministry of Defense (MoD) reported 14 armed engagements on the Armenia-Azerbaijan Line of Contact (LoC) and 63 armed engagements on the Artsakh-Azerbaijan LoC, almost twice as many as last week’s report. The Artsakh MoD documented 1,600 shots from Azerbaijani forces into Armenian positions and 190 ceasefire violations on the Artsakh-Azerbaijan LoC, also marking an increase from the previous week (Artsakh Republic Ministry of Defence, 27 June 2020).