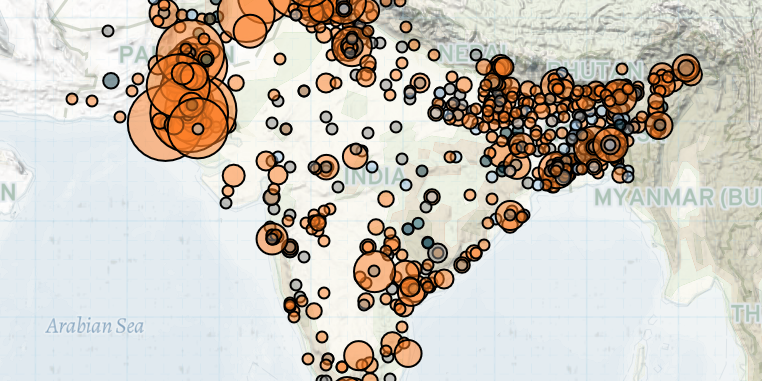 Key trends in South Asia last week include: armed clashes between security forces and domestic rebel groups in Pakistan and India; electoral violence in India; and coronavirus-related violence in Nepal and India.

In Pakistan, security forces killed four Tehreek-i-Taliban Pakistan (TTP) militants during a security operation in Khyber Pakhtunkhwa province. While in Balochistan province, seven security personnel were killed in an explosion claimed by the Baloch Liberation Army (BLA). The explosion was the fourth remote violence incident claimed by the BLA this year. The BLA is the largest and oldest ethno-nationalist militant group in the region. They have been active in Balochistan for nearly two decades, demanding independence and control over the natural resources of the province (Print, 29 June 2020).

In India, 11 militants from groups including Hizb-ul-Mujahideen (HM), Jaish-e-Mohammad (JeM), and Lashkar-e-Taiba (LeT) were killed in operations by Indian security forces in Jammu and Kashmir (J&K). In Anantnag district, militants affiliated with the J&K unit of the Islamic State (IS) attacked a security post, killing one security personnel and a civilian. This was the first such attack conducted by IS in J&K since April. In Chhattisgarh, a security personnel was injured in an explosion triggered by Naxal-Maoist rebels.

Elsewhere in India, electoral violence was reported in the northeastern tribal state of Tripura, as political parties ramped up preparation for the upcoming Tripura Tribal Areas Autonomous District Council (TTAADC) elections. The TTAADC is an autonomous district council established to promote self-governance in areas of the state dominated by tribal people (Financial Express, 18 January 2020). An Indigenous People’s Front of Tripura (IPFT) leader was killed, and members of his family were injured during an attack by Bharatiya Janata Party (BJP) affiliates. A couple of days later, IPFT supporters vandalized the vehicle of a BJP leader and attempted to attack the leader. More clashes among the two parties are expected as the IPFT, a junior partner in the BJP-led Tripura state coalition government, has announced that there will be no alliance with the BJP during the TTAADC elections (New India Express, 19 September 2019).

Last week, continuing coronavirus-related violence was reported in Nepal and India. In Nepal, locals clashed with police and prevented them from cremating a patient who died of the coronavirus. In India, frontline health workers battling the coronavirus continued to be targeted with violence. A worker was injured when residents of a coronavirus containment zone clashed with staff over food distribution and demands of travel outside the containment zone in Delhi. In Madhya Pradesh, a medical team was assaulted by locals when the team attempted to collect samples from the family of a coronavirus patient. In Gujarat and Delhi, locals assaulted and injured people over suspicion of spreading the coronavirus.

In other developments, violence over relief distribution to people affected by Cyclone Amphan was reported in Bangladesh and India. In Bangladesh, at least 10 activists of Bangladesh Nationalist Party (BNP) were assaulted and injured by Jubo League activists while distributing relief goods. In India, people affected by the cyclone assaulted members of a local panchayat in West Bengal over allegations of corruption in relief distribution. Similarly, supporters of BJP and Trinamool Congress Party (TMC) clashed over allegations of corruption in relief distribution and irregularities in enlisting relief beneficiaries. For more on violence in Bangladesh and India in the path of Cyclone Amphan, see this recent spotlight report from our COVID-19 Disorder Tracker.