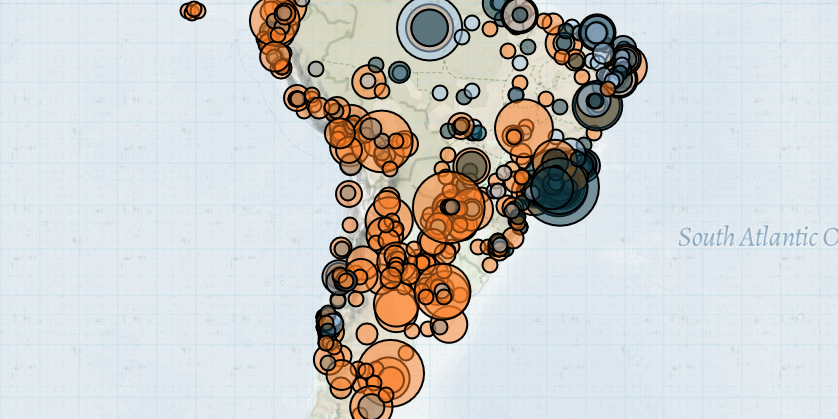 The number of pandemic-related demonstration events decreased in the region. In Bolivia, locals continued to occupy, for several weeks in a row, the K’ara K’ara city dump area in Cochabamba to demand free access to potable water during the pandemic. In Peru, hundreds of workers protested in the main cities of the country to demand the re-opening of the economy, amidst one of the strictest and earliest lockdowns in Latin America (BBC News, 26 June 2020). Similar protests were also recorded in Argentina and Paraguay, with labor groups asking to return to work. In Venezuela, the number of demonstration events decreased, though citizens continued to demand the distribution of potable water, fuel, and electric power amidst an economic crisis worsened by the pandemic.

In Colombia, an armed clash between two different FARC dissident groups left 12 people dead in a rural area of Narino department. Groups dispute the territory for control of important drug trafficking routes. Political killings continued to be reported elsewhere in the country as well, with one member of the Council of Communal Action (JAC) killed in Norte de Santander, and one indigenous person killed in Valle del Cauca. An Embera indigenous girl was raped by seven soldiers in Risaralda department, sparking protests across the country calling for justice.

In Chile, tensions remained high in the Araucanía and Biobío regions amidst continuing clashes and attacks led by suspected indigenous militias. Two clashes with police forces were reported in the localities of Lleu Lleu in Biobío and Carahue in Araucanía, with no casualties reported. Near Victoria, also in Araucanía, one truck driver was reported injured after an armed group attacked and set fire to two trucks belonging to a logging company. Chilean military forces recently announced the deployment of additional troops to the rural areas of both regions, along with aerial surveillance. Government officials expressed concerns that militia groups may be financing their activities with organized crime (El Mercurio, 21 June 2020).

In Brazil, labor groups took to the streets to demand financial aid during the pandemic, as several cities re-entered lockdowns following an increase in coronavirus cases. Business owners also protested against social distancing measures, demanding the re-opening of business and showing support for President Jair Bolsonaro. Additionally, the arrests of two Bolsonaro supporters over allegations of taking part in a fake news network prompted the president’s followers to demonstrate for their release.

The number of clashes between armed groups and state forces remained steady in Brazil, while several clashes between organized criminal groups were reported amidst territorial disputes across the country. In Rio de Janeiro state, clashes between the Red Command (CV) and the Third Pure Command (TCP) took place in the North Zone of Rio de Janeiro city, in Japeri city, and in Duque de Caxias city, resulting in a total of two reported fatalities. The clashes come against the backdrop of internal disputes within police militia groups that have been establishing alliances with both the CV and the TCP. In Rondonia state, located in the north of Brazil, CV members also clashed with Panda First Command (PCP) members, with one CV member reported killed. In Santa Catarina state, in the south of the country, the leader of the First Catarinense Group (PGC) was killed in a clash with Military Police forces.

The number of attacks on civilians perpetrated by drug trafficking groups and police militias increased compared to the previous week, with a total of 30 reported events across the country.