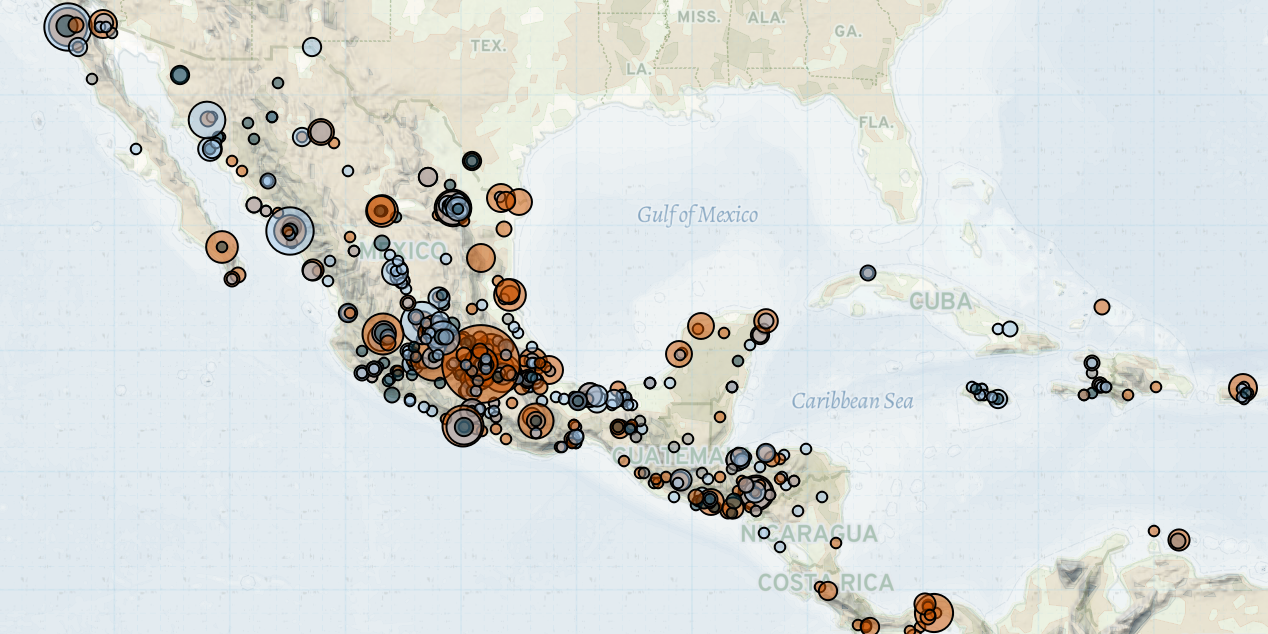 In Central America and the Caribbean, more than half of the demonstration events recorded last week were related to the coronavirus pandemic, with demands mostly centered on economic support. In addition to coronavirus-related mobilization, anti-government protests took place in Mexico and Haiti. As well, turf wars between organized crime groups continue to claim lives, especially in Mexico where several lethal attacks were reported.

Over half of the recorded demonstration events last week were connected to the coronavirus pandemic. The vast majority were organized by workers in Guatemala, Honduras, and Mexico demanding state subsidies to deal with the economic depression arising from lockdown measures. Layoffs and the suspension of contracts during the pandemic sparked protests in the tourism sector in Mexico, Trinidad and Tobago, and in Panama by airline workers. Taxi drivers were particularly vocal across the region; their protests represented nearly a quarter of coronavirus-related demonstration events. Further, demonstrations organized mostly by health workers in Costa Rica, El Salvador, Mexico, and Panama called for additional sanitary measures and equipment to treat patients with the virus.

In addition to demands surrounding the coronavirus response, in Haiti, a presidential decree renewing the mandates of various councils and mayors generated unrest with the burning of a town hall in Côtes-de-Fer. In Puerto Rico, the population protested over several days against the island’s governor, accused of obstructing justice in a case investigating the mismanagement of disaster relief funds.

In Mexico, a fourth wave of anti-government vehicle caravans led by the National Front against AMLO (FRENA) were reported across several states. In the states of Tamaulipas and Guerrero, farmers established widespread roadblocks demanding the delivery of fertilizers and fixed prices for their harvests. This comes a month after similar protests were registered in the state of Sinaloa.

Last week, the number of armed clashes in the region remained steady with gang activities reported across the region. In Haiti, members of the newly established alliance between gangs, G-9, marched through the streets of Port-au-Prince. They were cheered by crowds; the police did not intervene. This event contrasts with the earlier crackdown on a sit-in against corruption and gang violence by police forces with tear gas and live ammunition.

In Trinidad and Tobago, with the backdrop of the signing of a peace deal on 4 July between artists allegedly affiliated with the Rasta City and Muslim gangs (Trinidad and Tobago Guardian, 7 July 2020), a famous artist was shot dead in his home. Another five people who were at the deceased man’s house were shot and injured by armed men who opened fire from a vehicle.

In Mexico, gang violence perpetrated by the Jalisco New Generation Cartel (CJNG) and the Santa Rosa de Lima Cartel continued to be reported in the state of Guanajuato as part of their disputes over control of the territory.  The CJNG claimed responsibility for throwing a grenade in Celaya and killing a total of five people in Cortazar and Moroleon, while the Santa Rosa de Lima Cartel claimed the killing of a policewoman in Empalme Escobedo. Further, unclaimed attacks were reported in the Salamanca and Celaya municipalities where 12 people reportedly died. The CJNG also signified its presence in the state of Michoacan, Jalisco, and San Luis Potosi; there were reports of several narco roadblocks across municipalities in the Tierra Caliente area and clashes with police forces.  Meanwhile, in the state of Tamaulipas, clashes between the Cartel del Noroeste, its armed splinter group (Tropa del Infierno), and law enforcement were registered in Nuevo Laredo for the second consecutive week.

National authorities took actions to curb gang violence in Belize, Jamaica, and Honduras last week. In Belize, following a State of Emergency declared in Southside Belize City, policemen and military forces arrested 100 suspected gang members and criminal offenders. In Jamaica, a new task force aimed at combating gang violence was created, along with a ‘Zone of Special Operations’  in the August Town neighborhood of Kingston. In Honduras, a prominent Barrio-18 leader in charge of coordinating gang operations in the capital was arrested.

Finally, political activists and government representatives continue to be the targets of attacks in the region. In Cuba, a man attacked two members of the Patriotic Union of Cuba (UNPACU), allegedly following orders from the State Security Organs. In Honduras, a member of the National Party of Honduras (PNH) died in an attack perpetrated by several armed men during a meeting in San Pedro Sula. In Nicaragua, a Sandinista militant was shot and killed in a drive-by shooting, allegedly for opposing the Ortega government. While in Mexico, a former municipal president affiliated to the Institutional Revolutionary Party was shot and killed in the state of Michoacan; another local representative died in an attack in the state of Chiapas while on his way to a meeting to solve a land dispute.