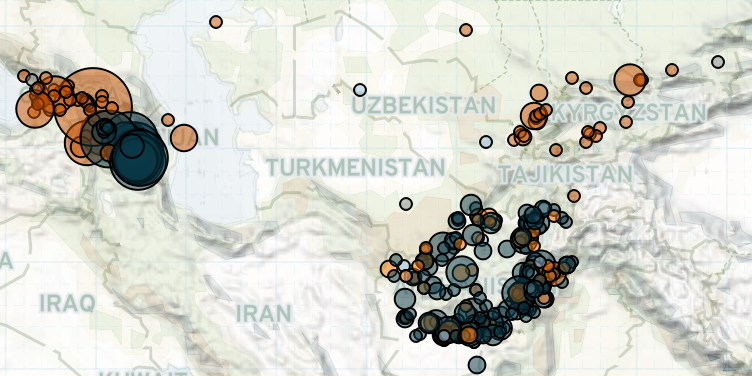 Last week in Central Asia, despite the increasing violence between Taliban and Afghan forces, prisoner releases continued as stipulated by the peace deal between the US and the Taliban. Across the region, a second wave of the coronavirus led to a decrease in the number of protest events. In Georgia, border crossings from breakaway regions resulted in two casualties. Lastly, ceasefire violations continued along the Armenia-Azerbaijan-Artsakh Lines of Contact while a direct clash took place between Armenia and Azerbaijan following the Azerbaijani president’s criticism of international efforts to solve the Artsakh conflict.

In Afghanistan, Taliban and Afghan forces continued to clash across the country. The Taliban targeted police forces with a suicide truck in Shah Wali Kot district center of Kandahar — the first such attack since the end of May. Subsequently, the Afghan government again called on the Taliban to reduce the violence; the group has largely rejected this call minus a brief ceasefire this past May during Eid al-Fitr (TOLO News, 10 July 2020). The Taliban has also accused the Afghan government of jeopardizing peace last week, by refusing to release 600 Taliban prisoners whose names were put forth by the Taliban (Pajhwok Afghan News, 7 July 2020). The two sides were able to eventually agree on a list of 180 prisoners whom the Afghan government has released (Reuters, 9 July 2020; Bakhtar News, 13 July 2020). This signals that the peace deal is still taken seriously by both parties.

In Central Asia, Uzbekistan and Kazakhstan have continued to impose lockdowns and restrictions due to a second surge in coronavirus cases (RFE/RL, 10 July 2020). This has caused a decrease in protests in the region. However, in Kazakhstan, small business owners still protested in Taraz, Karaganda, and Nur-Sultan, demanding financial help from the government amid the pandemic.

In Georgia, two unusual incidents took place along the borders. On 5 July, Abkhazia’s military forces shot a Georgian man reportedly trying to cross into Abkhazian controlled territory near Ganmukhuri village (Agenda.ge 6 July 2020). On 11 July, a Georgian citizen was shot and detained by Russian forces near the border between South Ossetia and Georgia. The South Ossetia authorities claimed that the man was the first to fire (Civil Georgia, 11 July 2020). While Georgian citizens who cross administrative boundary lines are often detained by local or Russian forces, such shootings at border crossings are not as common (EED, 22 June 2020). Recently, South Ossetia and Georgia have traded accusations of provocation with each side erecting illegal barriers in an attempt to change the borderline (Agenda.ge, 7 July 2020).

However, Azerbaijan’s President Ilham Aliyev declared international efforts to find a peaceful solution to the conflict “meaningless” last week, signaling a new diplomatic crisis in the ongoing conflict (Eurasianet, 7 July 2020). His statement was followed by deadly border clashes on 12 and 13 July at the Tavush/Tovuz part of the Armenian-Azerbaijani frontline in which artillery, mortars, unmanned aerial vehicles (UAVs), and tanks were used; these events will appear in next week’s data per ACLED’s release schedule. This resulted in the deaths of four Azerbaijani soldiers and at least eight wounded on both sides. This was a rare incident as the two sides do not often use such weaponry when they clash far from the Artsakh-Azerbaijan LoC (RFE/RL, 12 July 2020).