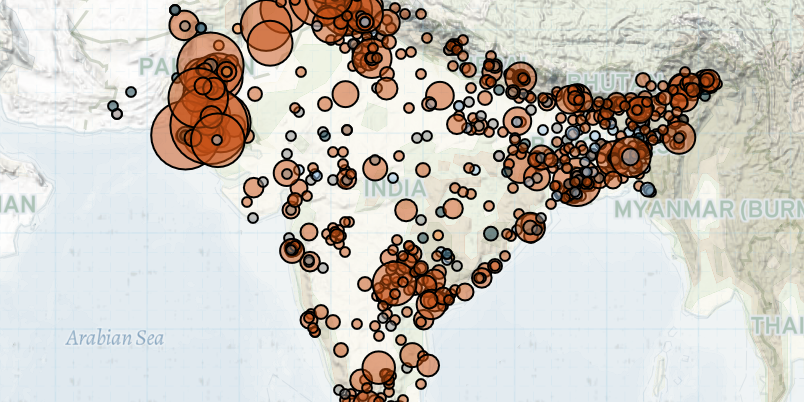 Key trends in South Asia last week include: armed clashes between security forces and domestic rebel groups in Pakistan and India, as well as both targeted attacks on civilians by militant groups and continued coronavirus-related violence in India.

In Pakistan, targeted attacks by ethnonationalist militant groups were reported in Balochistan and Sindh provinces. In Balochistan, five security personnel were killed in separate attacks by the Baloch Liberation Army (BLA) and Baloch Raaji Ajoi e Sangar (BRAS). The BLA is the largest and oldest ethnonationalist militant group; BRAS is an alliance of four major Baloch militant groups, which includes the BLA as well as the Baloch Republican Army (BRA), the Baloch Liberation Front (BLF), and the Baloch Republican Guard (BRG) (Print, 29 June 2020; Balochistan Post, 10 July 2020). In Sindh, a retired security personnel was killed in a grenade attack claimed by the Sindhudesh Revolutionary Army (SRA). The SRA is a Sindh-based militant group aiming to establish an independent Sindh (Gandhara, 19 June 2020). Over the past month, the SRA has claimed multiple attacks on security forces in Pakistan.

In India, civilians were reportedly targeted by militant attacks. In Bihar, Naxal-Maoist rebels killed two locals, accusing them of being police informers. Despite restrictions surrounding the ongoing coronavirus pandemic, security forces have intensified anti-militant operations in several states including in Odisha, Bihar, and Jharkhand (Times of India, 6 June 2020). Security forces killed nine Naxal-Maoist rebels during security operations in Odisha and Bihar States last week. In Jammu and Kashmir (J&K), three militants, two security personnel, and one civilian were killed during armed clashes between security forces and militants. Additionally in J&K, a Bharatiya Janata Party (BJP) leader and two of his family members were killed by Lashkar-e-Taiba (LeT) militants. This is the second such incident in the past month. In June, militants shot dead an Indian National Congress (INC) leader and village head.

In the northeast state of Arunachal Pradesh, six National Socialist Council of Nagaland-Isak Muivah (NSCN-IM) militants were killed during a security operation. The NSCN-IM is the largest Naga militant group in the northeast aiming to establish a sovereign Naga State (Quint, 31 October 2019). The government of India and the NSCN-IM signed two agreements in 2015 and in 2019, but a final peace agreement has been held up by disagreements over several issues, including calls for a separate flag and a constitution (India Today, 5 May 2020).

Elsewhere in India, violence against frontline health workers battling the coronavirus was reported last week in various states including in Odisha, Bihar, Maharashtra, Meghalaya, Jharkhand, and J&K. In Odisha, people housed at a coronavirus quarantine center assaulted a local government representative and an ambulance driver, after the representative denied them a coronavirus test. Also in Odisha, members of the Muslim community vandalized a police outpost and set fire to a police vehicle in retaliation for restrictions on gathering inside a mosque. In Bihar, locals pelted stones at a medical team who were attempting to transfer a coronavirus patient from a containment zone to a hospital. Similarly, in Maharashtra and Meghalaya, locals violently resisted continued restrictions enforced to curb the spread of the virus. In Jharkhand, locals opposing the cremation of pandemic victims pelted stones at security personnel over concerns of the virus spreading via smoke. In J&K, people housed at a quarantine center vandalized the center and clashed with police over delays in coronavirus testing.

Finally, in other developments, the security forces of China and India initiated measures to de-escalate hostility surrounding a border dispute in Ladakh union territory (New York Times, 6 July 2020). In June, 20 Indian security personnel were killed following clashes with Chinese forces at the Line of Actual Control (LAC) in the Galwan Valley.