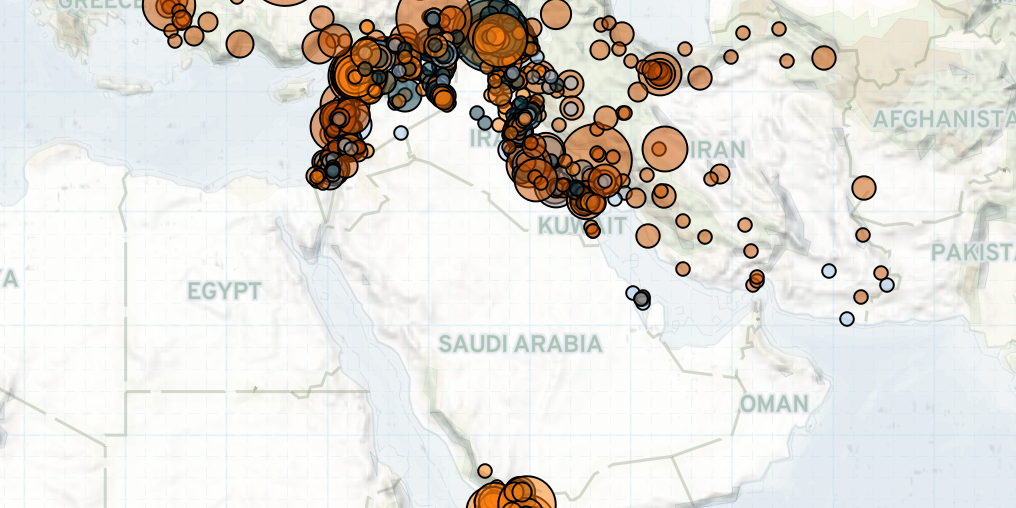 Last week was another relatively quiet week across the Middle East. However, across the region, event counts are slowly increasing back to the numbers seen before the coronavirus outbreak. Explosions/remote violence and protests remain the most frequent event types. Last week, there was an increase in explosion/remote violence events in Syria, particularly in shelling attacks.  Additionally, explosions/remote violence events remained high in Yemen. Protests increased slightly in many countries in the region and most significantly in Turkey and Iran.

In Syria, regime and allied militia forces continued their shelling barrages on areas in Idleb in conjunction with Russian airstrikes, while sporadic clashes against opposition and Islamist factions took place with no change in territorial control. Meanwhile, Turkey sent military reinforcements into Idleb on several occasions. A vehicle-borne improvised explosive device (VBIED) explosion wounded three Russian soldiers during a joint patrol by Turkish and Russian forces on the M4 highway, which may have triggered the subsequent Russian airstrikes in Idleb. Elsewhere, following several attacks by Islamic State (IS) forces, clashes between regime forces and IS continued in central Syria.

In Yemen, pro-Hadi forces advanced on the Qaniyah front on the Marib-Al Bayda border and Houthi forces advanced just south of the Mas Military Camp in clashes along the Marib-Sanaa border. In Ad Dali, a couple of Houthi offensives were reportedly thwarted by joint pro-Hadi and Southern Resistance forces, who reportedly made modest gains in Qaatabah district. Furthermore, indirect conflict continues unabated in southern Al Hodeidah governorate, as joint National Resistance Forces and Houthi forces continue to shell each other and civilian locations. In Abyan governorate, clashes between pro-Southern Transitional Council (STC) and pro-Hadi forces increased in frequency, weeks after the Saudi-mediated 26 June ceasefire. Clashes or exchanges of artillery and mortar fire were recorded on more than half the days last week, including consecutive days at the end of the week (Yemen Press, 18 July 2020).

A Saudi-led coalition airstrike in Hajjah governorate on 12 July reportedly killed seven children and two women (The New Arab, 13 July 2020) while another airstrike days later in Al Jawf governorate reportedly killed 25 people, including a number of children (Middle East Eye, 16 July 2020). In Al Mukalla City, an unprecedented pro-STC demonstration reportedly brought as many as a hundred thousand people from many areas of Hadramawt governorate to the streets, calling for the imposition of self-administration (Aden Press, 18 July 2020).

In Saudi Arabia, Houthi forces claimed to have struck airports in Abha, Jizan, Khamis Mushayt, and Najran, in addition to the Saudi-ARAMCO oil terminal in Jizan’s industrial center, with ballistic missiles. However, Saudi forces claimed to have intercepted between six and seven explosive-laden drones and four ballistic missiles, while neither confirming nor denying Houthi claims (Reuters, 12 July 2020).

Meanwhile, in Iraq, demonstrations continued to build momentum as power outages and water services continued to deteriorate. An increase in peaceful protests was reported. However, at least one demonstration event in Baghdad turned violent, allegedly leaving two demonstrators dead. Iraqi officials have denied the use of lethal force and that there were fatalities at the demonstration (Rudaw, 13 July 2020).

Operations by Iraqi forces and the Global Coalition against IS continued last week, with the most prominent attack being the killing of the IS Baghdad ‘wali’ (IS governor), his deputy, and his media spokesperson (Al Maloomah, 15 July 2020). IS attacks have decreased in recent weeks following heightened activity over the past two months — possibly suggesting that IS is in a phase of rebuilding to once again re-launch a new campaign of attacks.

Even though rocket attacks targeting US facilities and bases were not reported, for the second week in a row, a US logistics convoy was attacked by a newly formed Iranian-backed militia: Ashab Al Kahf (Shafaaq News, 15 July 2020). Many of these attacks, including the unclaimed rocket attacks, represent a new trend in which Iran is using militias, which are mostly newly formed and largely obscure, to attack US targets. At the same time, Iranian forces shelled the town of Hajj Umran in the Erbil province with no reported injuries. Meanwhile, the Turkish military campaign against the Kurdistan Workers’ Party (PKK) continued in northern Iraq with an increased number of reported fatalities on the Turkish military side.

Protests increased in Turkey last week over a range of issues from labor issues to the environment, economic hardship, and electricity cuts. Just under a third of the protests were held against violence and sexual assault towards women and children. The protests were held against a proposed bill to ease penalties for sexual assaults targeting minors. From 16 July onwards, more than half of the protest events were held mainly by Kurdish women and organizations. These protests were in response to a particular sexual assault case that sparked outrage, in which the perpetrator was allegedly a Turkish military personnel and the victim was 13 years old (ANF News, 16 July 2020).

Meanwhile, in Iran, protests also increased last week with some protesters calling for the re-imposition of coronavirus restrictions, while others called for removing them. There was a notable protest in Behbahan reminiscent of the kind seen in previous mass protest periods (VOA, 17 July 2020). Protesters chanted anti-government slogans and security forces responded with tear gas and arrests of around 30 people. As with the mass protests of November 2019, the internet was also disrupted.