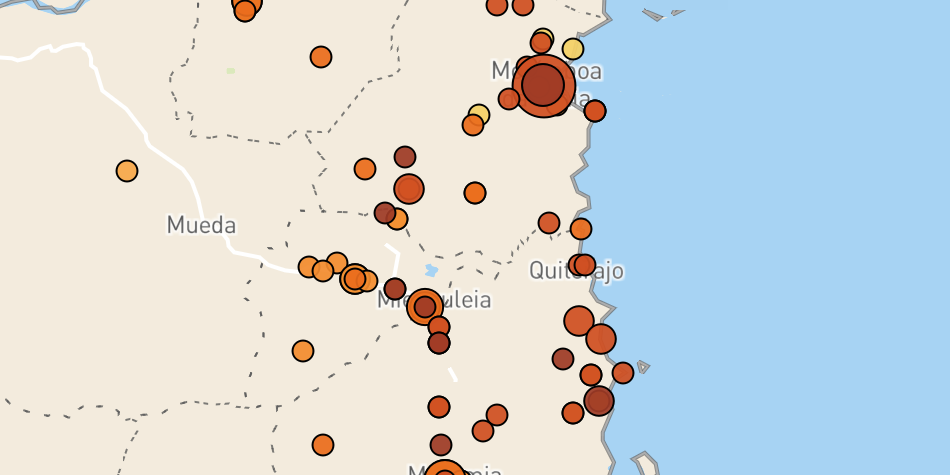 In the last week, three insurgent attacks took place in Cabo Delgado, all in Macomia district, along with troop movements by both sides in other areas of the province. The attacks highlighted the ongoing role kidnapping plays in the conflict, and drove further civilian displacement even as safe havens for displaced people are stretched beyond capacity.

The first attacks took place on 23 July. In Manica, Macomia district, an insurgent raid resulted in an occupation, with attackers remaining in the village through 25 July and then leaving with six kidnapped women and some looted food. The attackers burned homes in the village as well. Also on 23 July, in nearby Mucojo, insurgents reportedly arrived by boat and burned numerous homes, killed two civilians, and kidnapped several women. The attacks have forced minibuses traveling between Mucojo and Macomia town to move in convoys for safety.

Late on the night of 25 July, insurgents struck Novo Cabo Delgado, Macomia district, where people displaced from Xitaxi (20 kilometers to the northwest), Miangalewa (10 kilometers to the north), and other nearby villages were staying. Insurgents killed four in the village and burned several homes. Local sources reported that Mozambican security forces did not arrive in the village until morning.

Insurgent activity was also reported in northern Mocimboa da Praia district, where a group of roughly 10 fighters spoke with residents of Anga on 21 July. The insurgents said that they were not interested in violence at this time, but told people there to retreat to Milamba and remain in the village.

Further south, government troops strengthened their position in Quissanga district, occupying an old insurgent base in Cagembe and building up their presence in inland villages. Though coastal Quissanga is still a contentious space, the inland area around Bilibiza seems to be increasingly under government control. The last attack ACLED recorded in the Bilibiza administrative post was 1 July. Civilian reports from the area describe civilians coordinating with state security forces about when the pace of counterinsurgency operations will slow and they can return to their crops.

Finally, three unknown armed men kidnapped Sheikh Saide Bacar in Pemba on 25 July (Carta de Mocambique, 28 July 2020). Sheikh Saide is a representative of the government-recognized Conselho Islâmico de Mocambique (CISLAMO) and prayed at an event with Mozambican president Filipe Nyusi in Pemba in February. Sheikh Bacar and CISLAMO have been longtime foes of the insurgency, and the sheikh denounced a religious group that appears to have been a forerunner to the insurgency back in 2016, urging state authorities to take action against young religious ideologues (Club of Mozambique, 12 October 2017). Yet Mozambican security services arrested him in 2018 and held him for a month, before CISLAMO intervened to free him. There have been other recent abductions of Muslim religious leaders in Cabo Delgado, including Sheikh Kidume, of Palma, who disappeared in April, and Sheikh Kada Sualeh Chabane, of Mucojo, Macomia district, who was taken last year (Club of Mozambique, 28 April 2020). The abductions are unsolved, but local speculation mostly centers on the government as likely perpetrators. In a somewhat analogous case, Sheikh Muemede Selemane was arrested earlier this year after he entered a police station to inquire about the arrest of one of his congregants.

The 27 June insurgent attack on Mocimboa da Praia town and the attacks that have taken place since then have demonstrated the importance of a phenomenon that has long been part of the Cabo Delgado conflict: kidnappings of civilians — especially young women — by insurgents.

Reports of kidnappings of children during the Mocimboa da Praia attack put the number taken above 30, and others reported seeing insurgents kidnap four truckloads of women. Abductions have continued apace since then. Kidnappings, and attempted kidnappings, by insurgents have been reported in Mocimboa da Praia, Macomia, and Ibo districts in July, and more than six women were taken in Macomia district just this past week.

Yet even as the threat of abduction continues to menace Cabo Delgado civilians, escaped abductees are also becoming the public’s clearest source of knowledge about how the insurgency is organized. For example, last week five girls who were kidnapped during the Mocimboa da Praia battle at the end of June found their way home after a five-day sojourn through the bush. Once back among family, the girls reported that the insurgent camp they were taken to was large and run patriarchally, with women assigned to certain men and expected to follow orders from the men. They also reported that men and boys in the camp were being given military training and were closely monitored to prevent desertion, which may explain why such a high proportion of abductees who have escaped have been women.

The accounts from returned abductees fits with widespread perceptions among Cabo Delgado civilians that insurgent kidnappings lead to forced marriages — that is, sexual violence — and forced labor for those taken. The prevalence of kidnappings might suggest that the insurgency is having a difficult time with voluntary recruitment, but it is hardly a clear indication one way or another. As political scientist Hilary Matfess noted about Boko Haram’s infamous practice of mass abduction of women, the press coverage of abductions actually served to obscure a great deal of voluntary recruitment of women into the organization (Washington Post, 8 March 2018). Kidnapping and incentive- or ideology-based recruitment can function side by side in non-state armed groups.

Despite progress in Quissanga, relations between civilians and soldiers in more northern districts of the conflict zone continued to break down last week. Mocimboa da Praia town remains effectively lawless outside the area surrounding the port nearly a month after the last battle there. The head of the local residents’ association told MediaFax that local civilians see security forces as terrorists due to the ongoing violence and looting government troops have perpetrated (Zitamar News, 22 July 2020). Similarly, civilians in the district capital of Macomia report that members of the police special forces are shaking people down for cash on the street. One young man, who had his documents in order, had to pay police 600 meticais ($8.50) simply because he had the money on him. Those without the ability to pay are beaten.

Aside from security threats from insurgents and government forces, Cabo Delgado civilians have also had to contend with increasing access challenges. The most dire is a lack of access to clean water in many parts of the conflict zone. The cholera crisis has deepened and spread to new areas (Zitamar News, 27 July 2020). In Pangane, on the Macomia district coast, 52 people had died of the disease as of 25 July. Four security force personnel had also fallen ill, but had been evacuated by boat to Ibo. Locals were not so lucky. Though Pangane residents say the pace of new infections is slowing, they are still deeply concerned about the lack of medical aid in the area. Olumbe, Palma district, has also had an outbreak, in which eight people have died so far. A health team tried to reach the town by boat last week, but had to turn back due to poor weather. In all, the Mozambican Health Ministry has recorded 1,288 cases of diarrhea and 18 resulting deaths in Ibo, Macomia, Mocimboa da Praia, Pemba, and Metuge, but those numbers are a clear undercount, as no new data has come out of some of the more war-torn districts in weeks.

Displaced civilians also increasingly lack access to housing. The mayor of Pemba, Florete Simba Motarua, said that his city is already at capacity and has no space to house more displaced people beyond the estimated 30,000 already there (Club of Mozambique, 27 July 2020). Yet between 23 and 25 July, another 800 displaced civilians arrived in Pemba by boat, mostly from the Mucojo (Macomia district) and Mocimboa da Praia areas. Similarly, the camps recently established for displaced people in Metuge district are already overfilled, with people having to sleep outside even if families double up in available tents (Observador, 23 July 2020). Food is also tight in the Metuge camps, which is concerning, as there should be no security challenges in getting resources to Metuge. The government is planning a new camp in Nampula province, but is only in the early stages (Radio Mocambique, 22 July 2020).

For those still in the conflict zone, access to cash has become a major concern. A combination of insurgent violence and unrepaired damage from Cyclone Kenneth has knocked out many of the bank branches and ATMs along the Cabo Delgado coast. If someone in Macomia town wants to make a cash withdrawal — say, to have enough on hand to pay off marauding police — they now have to travel to Pemba to do so. That trip is long, potentially dangerous, and, with prices inflated due to the conflict, could run them up to 1,400 meticais (about $20). Mobile banking alternatives rely on mobile phone infrastructure, which insurgents have targeted, and require agents to carry substantial cash, something many are resistant to doing in the current security climate.

Finally, the government also admitted that the mounting displacement challenge in Cabo Delgado is hampering efforts to limit the spread of COVID-19. Provincial Secretary of State Armindo Ngunga told STV that “we did a round of neighbourhoods to see what the situation is, and we found that the number of people in the same house reaches 20, 30 or even 50” as a result of displaced civilians moving in with family members to get out of reach of the conflict. Those conditions make quarantine and social distancing impossible. An epidemiological study of COVID-19 in Pemba showed that displaced people were the second-hardest hit demographic, after market traders but ahead of transport and even health workers. As the displacement crisis worsens, the government’s ability to contain the disease will be severely tested. 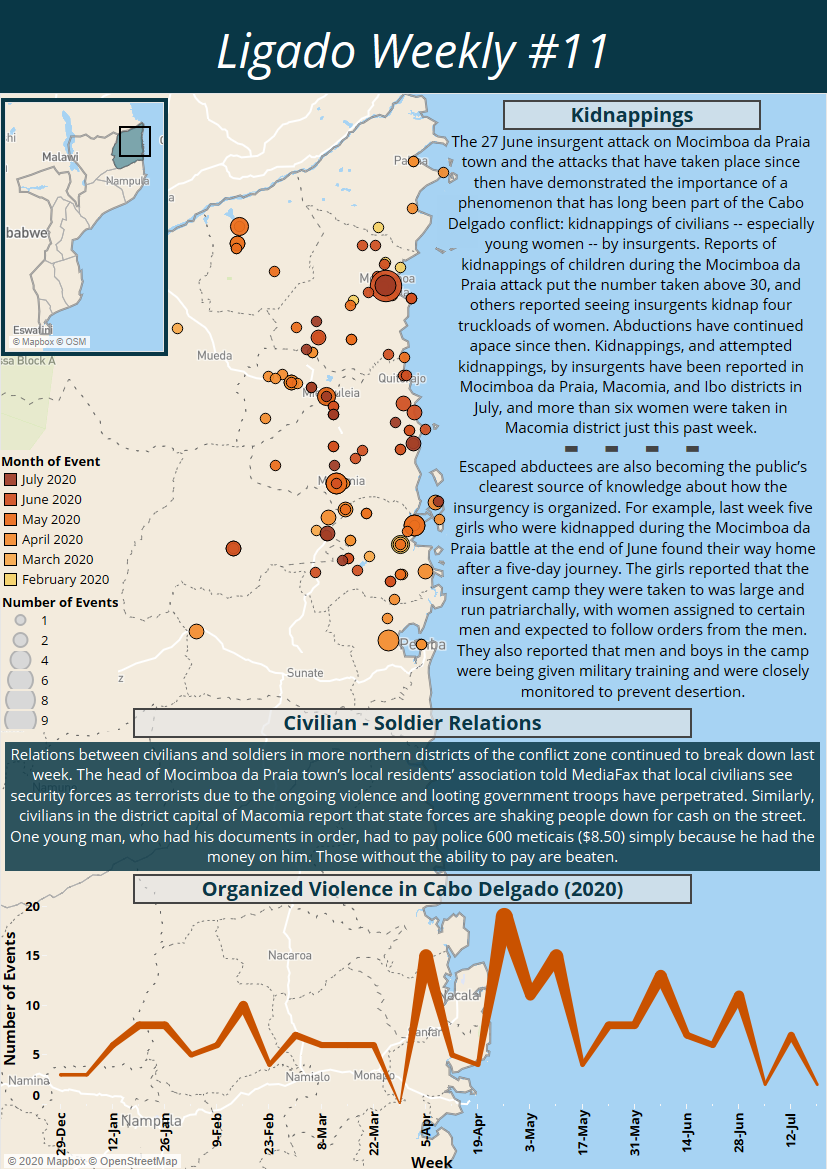