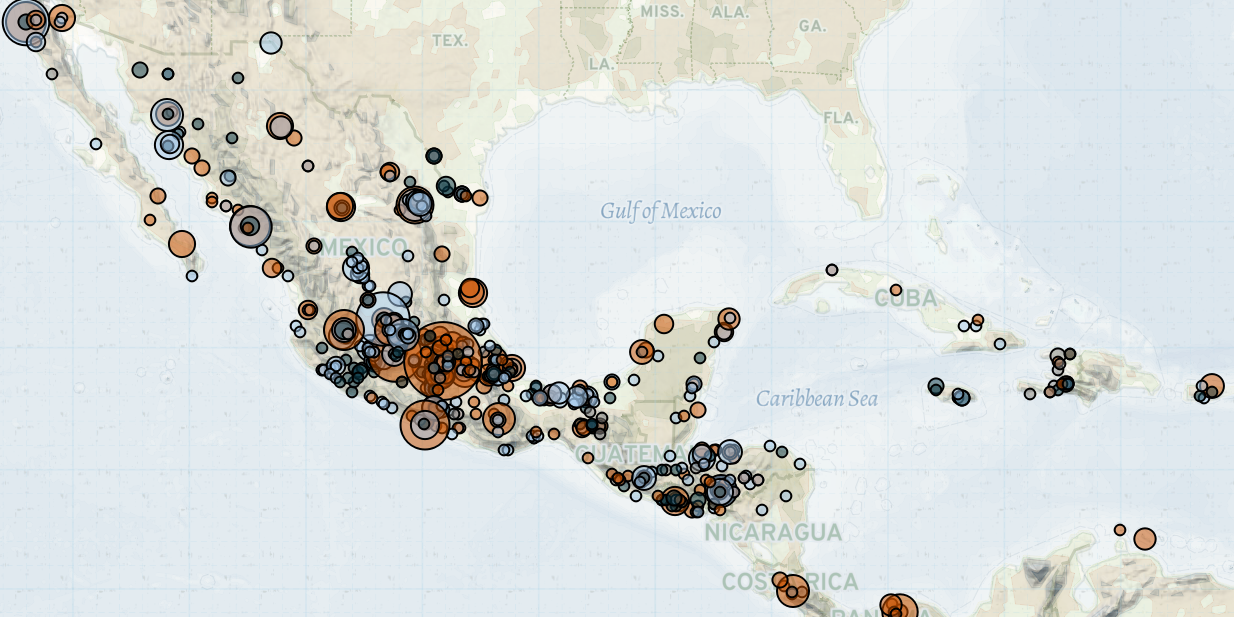 Last week, demonstration events remained relatively high in Central America and the Caribbean. Amidst coronavirus-related protests, the enforcement of lockdown policies led to two violent incidents in Haiti and Mexico. In Mexico, anti-government mobilization was reported for the fifth consecutive week and the lack of access to drinkable water generated unrest, while in Honduras, members of the Garifuna community protested over the kidnapping of four of their leaders. Meanwhile, gang violence continued across the region, with clashes reported in Guatemala, Haiti, Jamaica, and Mexico. Violence against civilians remained steady, with attacks reported against the opposition in Cuba and Nicaragua.

As the number of coronavirus cases continues to rise in the Americas, and with the extension of lockdown measures in some countries in Central America, demonstration events directly related to the coronavirus pandemic accounted for a third of the recorded demonstration events last week. In Costa Rica, unions and mayors protested against lockdown measures and their negative effects on the economy. They demanded the reopening of businesses. Additional protests were reported at the border with Nicaragua, involving stranded Nicaraguan transportation workers who are unable to cross back into their country unless they present negative coronavirus test results. This is not the first time Nicaraguan truck drivers have seen their work hampered by the pandemic: earlier in May, they protested against sanitary measures that prevented them from entering Costa Rica (CR Hoy, 27 May 2020). In Mexico and Panama, local populations have been asking for state financial support to comply with confinement measures as workers have demanded the resumption of activities. In contrast, in Belize and Puerto Rico, a group of protesters gathered near airports in opposition to its reopening and to prevent tourists from entering, fearing another surge in coronavirus cases. Meanwhile, laborers who have continued to work during the pandemic, including railway workers in Mexico and health workers in Honduras, Mexico and Panama, protested to demand protective equipment to prevent the spread of the coronavirus.

In Haiti, defiance of coronavirus lockdown policies led to a shoot-out between armed men and police forces in Port-au-Prince, as law enforcement officers intervened to shut down a street party. A person died while trying to escape. In Mexico, the police beat up a taxi driver, allegedly for not wearing a mask – a compulsory measure for taxi drivers – and for refusing to comply with the police.

Meanwhile, in Honduras, a series of demonstrations organized by the Garifuna community took place in Triunfo de la Cruz, following the kidnapping of four Garifuna leaders by armed men in police uniforms on 18 July. The motive of the kidnapping remains to be determined but takes place against the backdrop of a surge of attacks led by extractive industries and targeting Garifuna communities, with hundreds of land defenders killed since 2009 (The Guardian, 23 July 2020). In Mexico, demonstrations over the lack of access to drinkable water turned violent with rioters attacking the town hall secretary in Zinacantan, Chiapas and looting a municipal building in San Juan Xiutetelco, Puebla. In Ixmiquilpan, Hidalgo, a peaceful protest over access to water was violently repressed by the security staff of the mayor who opened fire against protesters. Demonstrations over water resources are not uncommon in Mexico, as the country experiences high levels of water stress: 36 million people do not have direct access to water, a necessity further exacerbated by the coronavirus crisis (Milenio, 7 July 2020).

Elsewhere in Mexico, the National Front against AMLO (FRENA) organized a fifth weekend of anti-government mobilization across several states, rejecting the policies of President Andrés Manuel López Obrador and calling for his resignation.

In parallel, clashes involving criminal groups continued to claim lives across the region. In Mexico, the dispute over control of the US-Mexico border between the Gulf Cartel and the Northeast Cartel continues to escalate in the state of Tamaulipas. In the municipality of Miguel Aleman, traditionally held by the Gulf Cartel (Insight Crime, 30 January 2020), four men died in a clash between the criminal groups and three more died in a clash between the Gulf Cartel and the military forces. In the state of Michoacan, five people were killed in the on-going turf war opposing the Jalisco New Generation Cartel (CJNG) and its rival Los Viagras criminal group in the Aguililla municipality.

In Haiti, violence related to gang warfare over the control of neighborhoods of Port-au-Prince was reported last week. The Ti Gabriel gang, operating in the Nan Brooklyn neighborhood, made an incursion into a bordering territory controlled by the Belekou Gang, killing three people (Fondasyon Je Klere, 22 June 2020). Following the attack, reports claimed that allies of the Belekou Gang, members of the G9 gang coalition, are preparing a retaliatory attack. This takes place in the context of increased clashes between criminal groups following the creation of the G9 coalition in June, as well as increased power around Jimmy Chérizier, one of the most influential gang leaders, known for his alleged ties with the government (Insight Crime, 23 July 2020). In Jamaica, one of the most-wanted criminals in the country, a former high ranking member of the dissolved Ratty Gang and founder of the Retrieve gang, was shot and killed in a police shoot-out after years of being chased.

In Guatemala, the feud between the Barrio-18 and the MS-13 criminal groups led to the death of one bystander and three gang members. The clash took place less than a week after the President of Guatemala declared a state of emergency in five municipalities to fight organized crime — a decree that was, however, not adopted in Congress.

Across the region, violence targeting civilians stemming from gang activity continued unabated. In Mexico, the CJNG continued to strengthen its hold in Guanajuato state with the support of its armed branch Grupo Elita: setting houses on fire and leaving narco messages next to dismembered bodies in Celaya, Amexhe and San Juan del Llanito. In Honduras, armed men intercepted and shot dead nine people who were travelling in a pickup truck in the Yoro region; they then burned their bodies.

In addition, attacks against the political opposition were reported in Nicaragua. As the country was commemorating the anniversary of the Sandinista revolution, a man shot and killed an alleged infiltrated member of the opposition who shouted “Free Nicaragua” during the celebratory march. The Nicaraguan government’s authoritarian response to the 2018 political and social crisis and immediate crackdown on dissent has established a repressive political environment, which persists to date. In Cuba, members of the Patriotic Union of Cuba (UNPACU), the largest opposition group in the country,  took part in a protest demanding the release of political prisoners. Two days later, UNPACU supporters were forcibly taken by the police, stripped of their clothes and shoes, beaten up, and left in the mountains, miles from their home. This takes place two weeks after a man who was allegedly following orders from the State Security Organs attacked two UNPACU activists in Majibacoa. The Cuban government has led a campaign against the opposition, and critics of the government often face criminal prosecution.