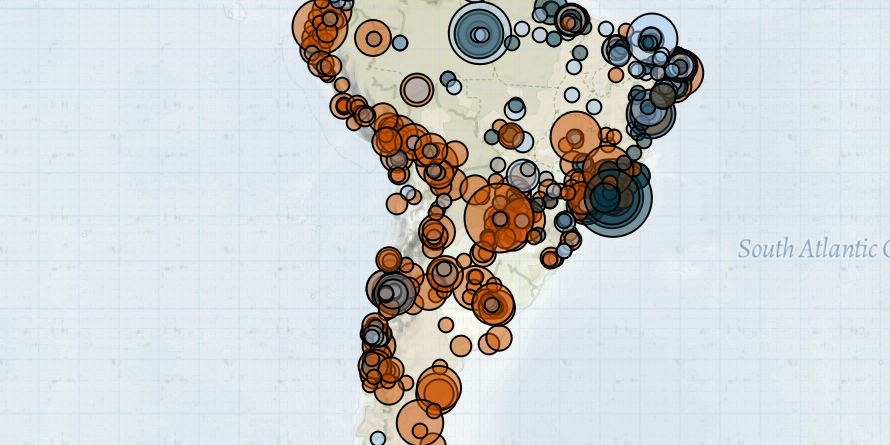 Last week in South America, key developments include: a decline in demonstrations over coronavirus-related issues across the region; increased political unrest in Bolivia, Peru, and Chile; political killings in Colombia; and continued armed clashes between criminal groups in Brazil.

The number of pandemic-related demonstration events decreased in the region last week. In Argentina, kindergarten owners organized motorcades across several provinces to demand the reopening of nursery schools and calling for subsidies from the government. In Marcos Paz city, after a prisoner tested positive for coronavirus, prisoners started a hunger strike calling for better hygiene protocols; prison guards used rubber bullets to end the strike. In Ecuador, teachers demonstrated in the main cities of the country to demand the payment of their salaries and to reject the budget cuts and lay-offs implemented during the pandemic. In Paraguay, workers from several sectors protested to demand financial aid from the government. Similar protests were also recorded in Brazil, with gym, restaurant, and bar owners calling for the reopening of businesses. Meanwhile, health workers and app delivery workers protested to demand better working conditions.

In Venezuela, citizens continued to demand the distribution of potable water, fuel, and electric power amidst an economic crisis worsened by the pandemic. On 21 July, workers of the state company Petroleum of Venezuela (PDVSA) organized a strike and staged demonstrations in several cities, to demand better salaries and the payment of an additional bonus of 150 dollars. In Bachaquero, Zulia state, state forces dispersed the protesters, but no injuries were reported.

On 22 July, in Cochabamba city, Bolivia, citizens organized a motorcade to call for the suspension of presidential elections, and to demand that the legal status of the Movement ForSocialism (MAS), the political party of former President Evo Morales, be revoked. One day later, on 23 July, the Supreme Electoral Tribunal postponed the elections for the second time, due to the pandemic. They have been rescheduled from 6 September 2020 to 18 October 2020. Following this decision, supporters of the MAS movement, which oppose the current government of Jeanine Áñez, claimed that they will resort to protests to contest the rescheduling (BBC News, 23 July 2020).

In Peru, locals continued to block the Southern Mining Corridor in Espinar province for the second consecutive week, demanding the payment of a bonus from mining companies, as provided for by a previously signed agreement. Demonstrators set several mining trucks on fire, and clashes were reported between demonstrators and police forces, with at least four people injured. Peru is home to one of the strictest and earliest coronavirus lockdowns in Latin America (BBC News, 9 July 2020). Analysts claim that authorities facilitated mining activity in the country by allowing continued functioning of the sector with flexible sanitary protocols in an effort to boost the economy without adequately protecting and compensating local workers and communities (La Vanguardia, 16 July 2020; Observatorio de Conflictos Mineros de América Latina, July 2020).

In Chile, demonstration events continued to significantly increase across the country, with citizens calling for the approval of a law that would allow the withdrawal of 10% of their retirement fund to help face the economic crisis. Several clashes were reported between demonstrators and police forces. Additionally, women took to the streets for several days to repeal a court ruling, which rejected the pre-trial detention to a man accused of sexual offenses against several women.

Meanwhile, also in Chile, Mapuche indigenous people continued to call for the release of arrested activists, with protesters occupying government buildings in Biobío region. In Canete area, one person was reported shot and injured after getting out of his vehicle to check a barricade on a local route, set by suspected indigenous militiamen. Following these events, a congressman called for the dismissal of the Ministry of the Interior and Public Security, citing the escalation of violence in the southern regions (Biobio Chile, 24 July 2020).

In Colombia, political killings continue to be reported across the country, with a 15-year-old Awa indigenous youth shot to death by police forces during an operation to eradicate illicit crops in Putumayo. State operations of crop eradication can further exacerbate conflict situations in Colombia and leave peasant communities at risk during the health pandemic (Amnesty International, 22 July 2020). Moreover, indigenous groups strongly criticize what they consider non-compliance by the government with respect to the peace agreements signed in 2016, which established the gradual and voluntary substitution of illicit crops for other subsistence alternatives for the poorest indigenous communities (BBB, 14 November 2019). In Norte de Santander, at least seven people were reported killed by members of Los Rastrojos gang. The smuggling and drug trafficking routes in the area are contested, often leading to gang clashes.

Clashes between criminal groups and state forces continued in Brazil last week, while organized criminal groups clashed amongst themselves. At least 26 people were reportedly killed in such clashes. In addition, the number of attacks on civilians perpetrated by drug trafficking groups and police militias remained steady.  In Manaus city, two members of the First Capital Command (PCC) were killed during a clash with Military Police officers. Two other members were arrested.

Finally, several acts of vigilantism were reported in Brazil. Two suspected thieves were beaten to death by locals in different events in Manaus city, Amazonas state. A suspected killer was also stoned to death in Santa Maria city, Distrito Federal. The rise of events involving spontaneous local vigilante mobs in Latin America is frequently attributed to the population’s lack of trust in judicial institutions and the security crisis, which leads locals to take the law into their own hands (Connectas, 30 May 2019).

Bhavani Castro is the South America Research Manager at ACLED. She holds a M.A. in International Security from the Institut d´Études Politiques de Paris – Sciences Po Paris, and a B.A. in International Relations from University of São Paulo. Her research interests include ethno-nationalist conflicts, communal violence, and non-state armed groups and gender. She is fluent in Portuguese, English, and French and is based in São Paulo, Brazil.
30 July 2020
Share
TweetShare on Twitter Share on FacebookShare on Facebook Share on LinkedInShare on LinkedIn