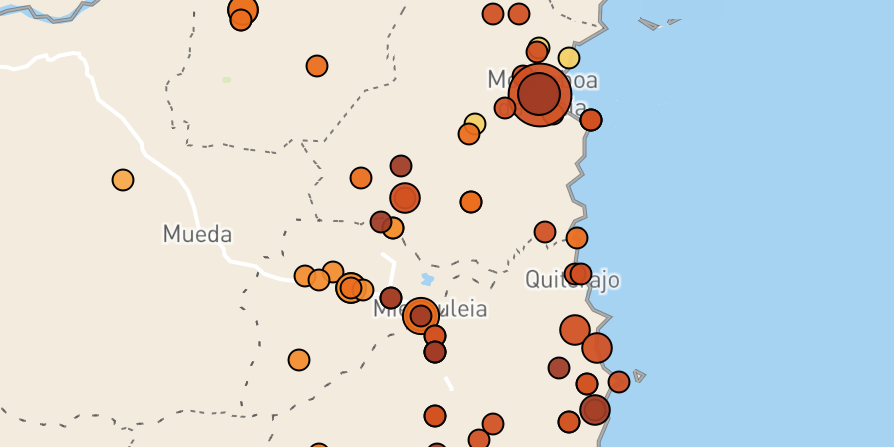 The difficulty of acquiring clear information in Cabo Delgado was once again in evidence last week, as conflicting reports made it challenging to clarify the level of insurgent violence. There is, however, clarity on the geographic spread of last week’s attacks, with insurgents targeting Mocimboa da Praia town and two Macomia district locations.

In Mocimboa da Praia, a group of 10 insurgents burned five homes in the Nabubussi neighborhood on the night of 28 July. The attack principally targeted a truck that had arrived that day from Nampula carrying rice and goats. The attackers killed a goat, stole the young goats, and looted much of the rice in the truck before burning it. A Mocimboa da Praia resident told Voice of America that insurgents also killed a man in the raid (Voice of America, 30 July 2020). The attack demonstrates the insurgents’ continued need to prey on civilians for basic supplies like rice and meat. Likewise, it shows the ease of the insurgents’ intelligence gathering, which allowed them to target a particular food shipment in a town well-garrisoned by Mozambican security services.

The same Voice of America source said that insurgents were back in Mocimboa da Praia the next night, 29 July, and took more food. In the aftermath of the attacks, security forces closed the road between Mocimboa da Praia and Palma.

Also on 28 July, insurgents attacked Litandacua, Macomia district. They killed two civilians, burned homes, and looted before leaving the village. On their way out, a local militia, armed with out of date weapons, set upon the attacking insurgents, killing 12 of them.

Reporting on the aftermath of the 28 July Litandacua clash is somewhat unclear, as Voice of America describes an attack the next night on a “Tandacua village” that resulted in eight civilians being beheaded. “Tandacua” is almost certainly Litandacua — the Voice of America report puts Tandacua in the Chai administrative post, which is where Litandacua is located. At least one source, however, claims that the Voice of America report is describing a separate incident, so final confirmation is elusive. In any case, insurgents did return to Litandacua the night of 31 July, forcing the civilian population to flee, burning homes and looting. No one was killed in the attack, and a rumor that the attackers promised to stay in the town for a week in response to the local militia killings never came to fruition.

In Manica, Macomia district, an insurgent raid on 30 July resulted in homes being burned, food supplies looted, and four girls being kidnapped (Carta de Mocambique, 31 July 2020). The next night, the insurgents returned, staying through the night and then leaving on 1 August, along with seven kidnapped women.

Additionally, late news came in last week of an earlier attack in Novo Cabo Delgado, Macomia district, on 26 July. That incursion left six civilians and two insurgents dead, the latter fatalities coming as the result of an off-duty member of the security services who was in the village.

The 28 July skirmish at Litandacua is the largest scale violence by a local self-defense organization against an in-progress insurgent operation since the conflict began. A source reports that the clash was one-sided because the insurgents left the village the way they entered — which allowed the local militia to set up an ambush — and because they carried no bullets for their firearms, leaving them vulnerable to the militia’s inferior armaments.

There are no reports about where the Litandacua militia sourced its weapons, but it became clear last week that the Mozambican government is arming some local community militias in Macomia and Muidumbe districts. In southern Macomia district, Liukwe, Licangano, and Nguida received arms. The distribution of weapons marks the first effort to stand up government-backed civilian militias since an abortive effort in Imbada, Quissanga district, back in 2018.

It is not, however, the first time that local citizens have taken their security into their own hands in the Cabo Delgado conflict. Back in June 2018, citizens around Naunde, Macomia district tried to organize a self-defense group and asked for arms from the government, but their requests were denied (Club of Mozambique, 15 June 2018). Similarly, in December 2018, a village militia in 5th Congresso, Nangade district fought off an insurgent attack at the cost of two militia members’ lives and 17 homes burned. Shortly afterward, an impromptu vigilante group from Lilongo, Nangade district, identified two men believed to be aiding the insurgency and beheaded them (Club of Mozambique, 6 December 2018). This year, there were reports of vigilante violence by war veterans in Muidumbe district as they attempted to fight insurgents just before the massacre at Xitaxi (Mail & Guardian, 4 May 2020).

There is no indication — outside of a rumor about the Muidumbe war veterans sourcing weapons from a local armory — that these groups were armed by the government (Africa Confidential, 30 April 2020). That security forces have now taken that step in southern Macomia and environs suggests that local militias may be a new approach by the government to maintaining security in areas where it does not have the resources to deploy troops. While that strategy may be cost effective in the near term, its long term political consequences are difficult to predict. Once local militias are armed it is difficult for the state to control what they will do with those weapons, or even to guarantee that the weapons don’t end up in insurgent hands. It remains to be seen whether adding more armed actors to the conflict will result in a net improvement in human security.

Within Cabo Delgado, cholera continues to be the most pressing humanitarian issue. As of 1 August, 78 people had died of the disease in Pangane, Macomia district, alone. Health aid has been slow to reach Pangane, which has led to high death rates for those suffering from cholera there, but a government team has been dispatched from Pemba to provide assistance. In Palma district, where there is a dedicated tent to caring for cholera patients in Palma town, 30 have died. Most of the dead are people who contracted the disease while fleeing violence in Mocimboa da Praia and the surrounding area and did not make it to treatment in Palma fast enough.

Outside Cabo Delgado, Nampula province was in the news last week as a key transit point for those entering and leaving the conflict zone. Instituto de Estudos Sociais e Económicos researcher Salvador Forquilha once again pointed to Nampula as a “reservoir” for insurgent recruitment in a webinar about the conflict (Visao, 28 July 2020). Forquilha’s argument, based on his field research, is that the main recruitment mechanisms from Nampula are political and economic. With fishing revenue drying up in the province, and the state seen as partially to blame, coastal Nampula youth move to Cabo Delgado “where they end up joining the insurgency.” There have been instances of police arresting young people headed north from Nampula and accusing them of attempting to join the insurgency.

Nampula is also home to 10,050 displaced people, and is scheduled to make room for another 1,000 in a new refugee camp the government will build in Inthuthu, Meconta district (Club of Mozambique, 3 August 2020). The National Disaster Management Institute last week reported that building the camp will cost about $1 million, which will cover drilling new wells, building housing, and providing the necessities for farming. Costs are variable and most people displaced by the conflict are unlikely to make it to refugee camps anytime soon, but creating enough camps at this cost to house 250,000 displaced people would cost the government $250 million — a substantial sum, especially given the economic cost imposed by COVID-19.

In Maputo province, Mozambican police chief Bernardino Rafael claimed that the insurgency is based and directed from abroad (Voice of America, 29 July 2020). Rafael was speaking to guards at the Ressano Garcia border crossing, which may account for some of his enthusiasm for emphasizing the centrality of border security to the conflict, but his statement is another instance of the Mozambican government having difficulty coming to terms with the insurgency’s domestic character. Though the Islamic State (IS) plays some role in the insurgency, there is ample evidence that the organization has Mozambican roots and is driven at least in part by local concerns.

Internationally, the Cabo Delgado conflict continues to be more a topic for domestic political wrangling than a target for swift policy action. A report that the South African military “stands by to go into Cabo Delgado” did not amount to much beyond the South African army complaining about a lack of intelligence cooperation from Mozambique — a familiar grievance among Mozambique’s regional partners — and agitating for more funding (Africa Intelligence, 29 July 2020). The South African 43 Brigade, which the report claims has begun an “intensive training programme” in anticipation of a possible Cabo Delgado deployment, is a contingency planning unit with no inherent combat capability. Preparing for notional deployments is its job, but those preparations are not strong indications that such deployments will take place.

The idea that the Cabo Delgado conflict can help foreign militaries grab a bigger share of their national budgets has even spread to Botswana, where Botswana Defence Forces commander Placid Segokgo told Parliament that the insurgency arose because Mozambique did not spend enough on defense and warned legislators not to make the same mistake (The Southern Times, 31 July 2020).

Around 28 July 2020 (between 28 – 29 July), insurgents clashed with a local self-defense unit in Litandacua after the former attacked the city, killing three civilians and seizing goods. During the shootout, 12 insurgents were killed.

On 28 July 2020, a person was killed during an insurgent attack in Milemba neighborhood, Mocimboa da Praia. The group burnt a car, a mill, and several houses and seized goods.

Around 29 July 2020 (between 29 – 30 July), nine people were killed during an insurgent attack in Milemba neighborhood, Mocimboa da Praia. 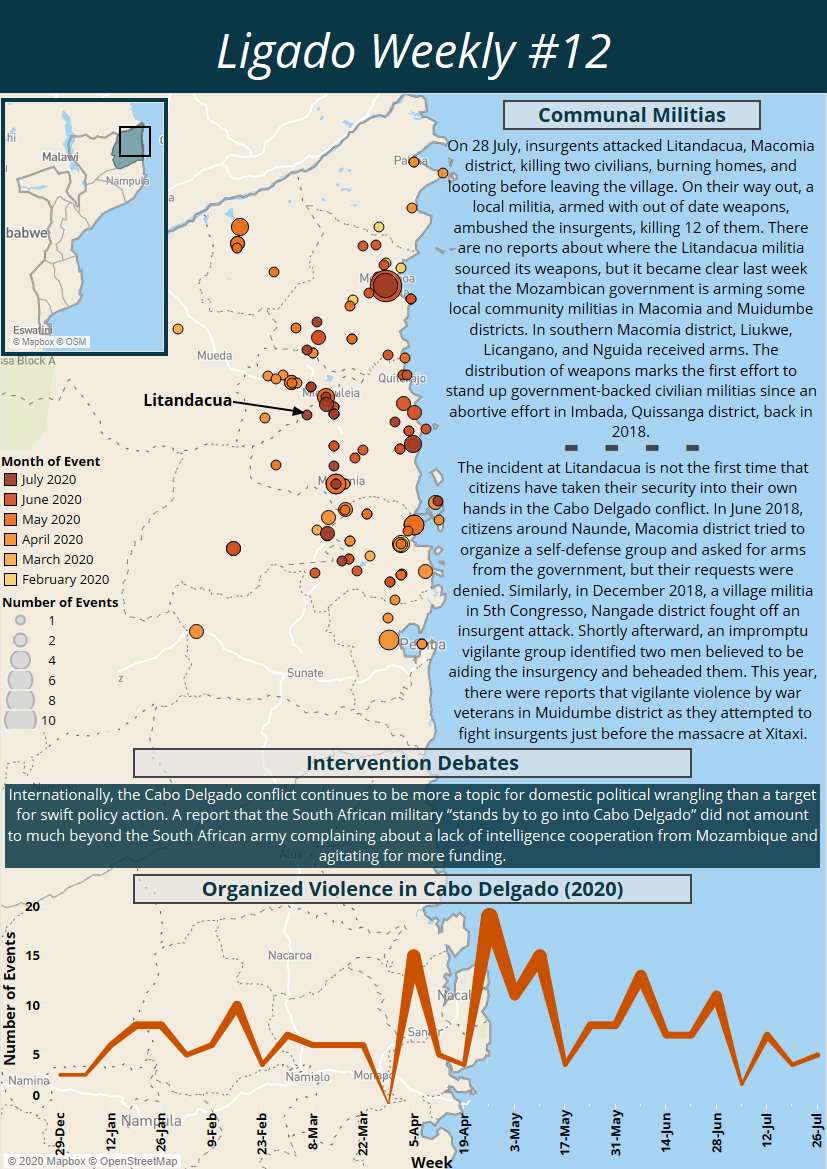 ACLED is the highest quality and most widely used real-time data and analysis source on political violence and demonstrations around the world. Practitioners, researchers, and governments depend on ACLED for the latest reliable information on current conflict and disorder patterns.
4 August 2020
Share
TweetShare on Twitter Share on FacebookShare on Facebook Share on LinkedInShare on LinkedIn