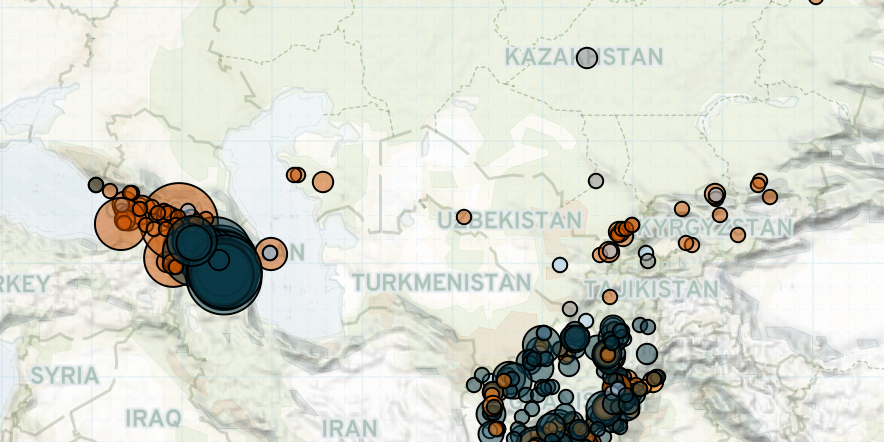 Last week in Central Asia and the Caucasus, the Eid Al Adha ceasefire led to a decrease in fighting in Afghanistan. Meanwhile, clashes along the Pakistan-Afghanistan border, and a deadly Islamic State (IS) attack in Jalalabad Prison, raised concerns about ending violence in the country over the long term. In Kazakhstan, restrictions meant to contain the coronavirus continued to trigger protests. In Kyrgyzstan and Uzbekistan, mistreatment of civilians by the police was reported, while in Georgia, journalist-led protests targeted discrimination against journalists for their political views. Ceasefire violations continued along the Azerbaijan-Armenia-Artsakh Lines of Contact at the same level as the weeks prior. Tensions persisted at the Armenia-Azerbaijan border after Azerbaijan and Turkey started joint military training, and the Azerbaijani army claimed to down an Armenian drone.

In Afghanistan, ACLED records an over 40% decrease in violence between the Taliban and Afghan forces during the past week following the ceasefire announced during Eid al Adha. Before the ceasefire, clashes took place in Badakhshan, Kandahar, Farah, Logar, and Helmand provinces. In Helmand, the Taliban hit an Afghan military helicopter with a missile that was “rarely seen in the hands of Taliban” and suspected to be supplied by Iran (New York Times, 30 July 2020). Nevertheless, both parties kept up with prisoner releases, making progress towards the intra-Afghan talks. The Taliban concluded the release of 1,000 government prisoners, according to the peace deal with the United States (US). However, the Afghan government retained the remaining 400 Taliban prisoners convicted of serious crimes, including murder and abduction. President Ghani, saying that he has no authority to allow their release under the country’s constitution, decided to convene the grand assembly of elders (‘Loya Jirga’) this Saturday to decide on the issue. The issue of the release of criminal Taliban prisoners has been brought up by Ghani previously. Still, the move to call a Loya Jirga drew reactions from the Taliban, as well as some Afghan scholars and politicians, who considered the decision risky for the peace process (TOLO News, 2 August 2020). The US, on the other hand, had suggested placing those prisoners under house arrest to end the stalemate (Reuters, 31 July 2020).

Amid the ongoing prisoner releases, a major attack took place in Jalalabad prison last Sunday in which IS militants engaged in a 20-hour long battle with Afghan forces to free their inmates. An unknown number of prisoners managed to escape the prison. The attack left dozens dead and injured and sparked fear about IS’ possible resurgence in Afghanistan.

Meanwhile, another cross-border event in Durand Line resulted in civilian fatalities and a brief exchange of gunfire between Afghan and Pakistani forces. Following a clash between the Pakistani border guards and Afghan citizens waiting to cross the border to celebrate Eid,  shelling coming from the Pakistani side killed 15 civilians and injured at least as many. Afterwards, Afghan security forces were deployed at the closed Chaman-Spin Boldak border crossing in Kunar province, where a brief fire exchange took place. Both parties accused each other of firing first and provoking the violence.

Meanwhile, in Kazakhstan, local authorities noted some positive changes in the fight against the coronavirus pandemic as the number of new cases decreased last week (RFE/RL, 28 July 2020). However, protests persisted as the pandemic continues to affect the economic and social life of citizens. In Arys and Ust-Kamenogorsk, women demanded subsidies from the state for socially vulnerable households. Social workers in Otegen-Batyr village and employees of the medical mask factory in Serebryansk protested, calling for unpaid wages. Moreover, medics in Taraz town demonstrated, asking for additional pay for their work during the quarantine. On 3 August, traders also organized a protest in Nur Sultan, calling on authorities to lift the restrictions.

In Uzbekistan, a teacher, who was taken to the police department as part of a theft investigation was tortured by police officers. It is the fourth case of mistreatment in July 2020 alone. Like many other countries in the region, Uzbekistan has a poor record of detention conditions; the widespread use of torture and the ill-treatment of detainees are ongoing issues in the country (HRW, 9 December 2019).

Similarly, last week, an ethnic Uzbek rights defender, Azimjan Askarov, died in custody in Kyrgyzstan. Authorities claim that the activist died because of pneumonia, although Askarov had previously stated that he was subjected to heavy torture in prison (RFE/RL, 28 July 2020).

In Georgia, journalist-led protests were organized in Batumi after the director of Adjara TV, a public broadcaster in Batumi, dismissed three opposition-affiliated journalists. Former employees and journalists condemned the new management of the channel, comprised of members largely nominated by the ruling Georgian Dream party (Reporters Without Borders, 20 July 2020). Similar protests have taken place in the country since February 2020.

Meanwhile, tensions persist along the border of Armenia and Azerbaijan, although direct clashes were not reported last week. On 29 July, the Ministry of Defence (MoD) of Azerbaijan claimed that they intercepted an Armenian forces’ drone on the Tovuz part of the border. As the Armenian side did not comment on this claim, Turkey and Azerbaijan started joint military training last week around Nakhchivan, Yevlakh, Baku, Ganja, and Kurdamir that involved artillery, air, and special forces (Turan Information Agency, 29 July 2020). Moreover, ceasefire violations continued at a similar level to the weeks prior. Azerbaijan’s MoD reported 31 armed engagements on the Armenia-Azerbaijan Line of Contact (LoC) and 78 armed engagements on the Artsakh-Azerbaijan LoC. Additionally, Artsakh MoD documented around 1,700 shots from Azerbaijani forces into Armenian positions and more than 170 ceasefire violations on the Artsakh-Azerbaijan LoC (Artsakh Republic Ministry of Defence, 01 August 2020).