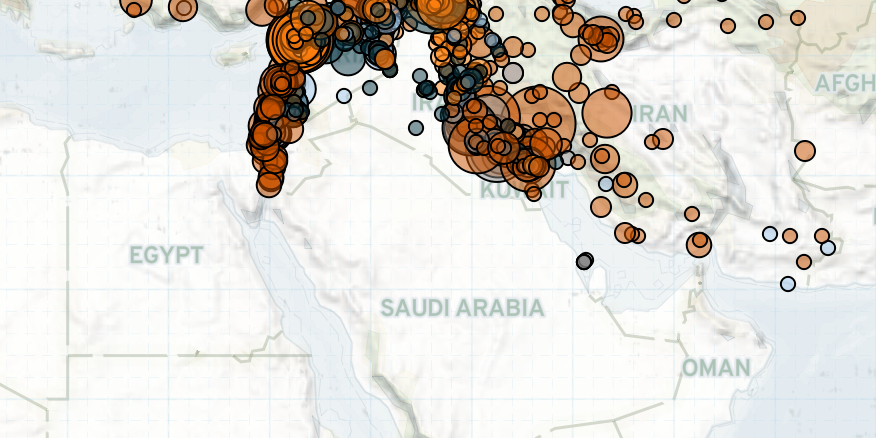 Last week in the Middle East, fewer armed conflict events were reported compared to weeks prior across the region. This is likely due to the celebration of Eid Al Adha on 31 July in most countries. However, riots increased, with this trend being driven by increased riots in Iraq over lacking public services and infrastructure. Protests in Israel remained high for the fourth week amid deep discontent with Prime Minister Benjamin Netanyahu as the country faces its second wave of the coronavirus.

In Yemen, due to torrential rainfall and Eid Al Adha, battles decreased significantly last week. In Al Hodeidah, shelling and clashes between joint National Resistance Forces and Houthi forces continued daily. On the Marib fronts, pro-Hadi forces attacked Houthi positions near Sirwah, advancing to a hill overlooking the city from the southeast, while attacking Houthi positions in the mountains to the north. Meanwhile, clashes between different tribal groups increased slightly, with reported incidents in Al Bayda, Hadramawt, Ibb, Lahij, and Shabwah governorates.

Notably, on 28 July, the Southern Transitional Council (STC) rescinded its self-administration of areas under its control and agreed to a Saudi-mediated deal with the internationally-recognized government to implement a modified version of the Riyadh Agreement (Al Jazeera, 29 July 2020). The STC claimed that they had achieved their goals of self-administration by accepting the new deal (AP, 29 July 2020). The deal reportedly includes 50/50 representation in a new, yet-to-be formed government, the naming of a pro-STC governor of Aden and director of security in the Aden governorate, and redeployments of STC-allied and pro-Hadi forces. The STC had announced self-administration on 26 April.

Despite the new deal, pro-STC and pro-Hadi forces repeatedly clashed in Abyan governorate two days after the announcement of the new deal. Clashes were more deadly than skirmishes the week prior, as evidenced by a number of reported fatalities on 1 August (Asharq Al Awsat, 1 August 2020). Additionally, despite the importance of redeploying armed forces for a successful deal, no major movements of pro-STC or pro-Hadi forces have been reported.

Meanwhile, in Syria, despite a relatively low number of events in the country last week, the Islamic State (IS) launched multiple attacks against regime members and positions in eastern and central Syria, resulting in numerous reported casualties. In the south, targeted attacks and assassinations continued by unidentified armed groups against regime members and former opposition fighters. These attacks have been ongoing since regime forces took over the area in 2018. Southern Syria is generally volatile due to the presence of Syrian regime, Russian, and pro-Iran militia forces in the area. Elsewhere, sporadic clashes between regime forces against opposition and Islamist factions continued in the Greater Idleb Area amid regime shelling barrages and Turkish military reinforcements into the area.

Also in Iraq, the Saqr military base in Baghdad was allegedly targeted by a booby-trapped vehicle, although some sources have refuted these claims, reporting that the mismanagement of a weapons storage facility in the camp and high temperatures ultimately led to the explosions (Rudaw, 28 July 2020; National Iraqi News Agency, 26 July 2020). Similarly, the Speicher military base was reported to have been targeted in a drone attack, while other sources blamed high temperatures for the explosions that occurred (Shafaaq News, 28 July 2020). These disputed claims around explosions in Iraq are not uncommon, but often responsibility for the attack is later claimed by an armed group. Lastly, a rocket attack against Baghdad’s Airport was reported, but no group has claimed responsibility (Basnews, 30 July 2020).

Meanwhile, the Turkish military campaign in northern Iraq against the Kurdistan Workers’ Party (PKK) resumed with airstrikes and artillery shelling. The attacks led to seven reported fatalities on the PKK’s side and the destruction of agricultural lands. On 28 July, the Turkish military and police launched a ground operation named ‘Lightning-3’ against PKK militants, deploying just over one thousand personnel in Tunceli province in Turkey (Daily Sabah, 29 July 2020).

In Israel, large protests against PM Netanyahu continue. In Jerusalem, one protest was attended by over 10,000 people, while hundreds of smaller scale protests were held nationwide (Jerusalem Post, 2 August 2020). The protests were organized by the ‘Black Flag Movement’, which is calling for PM Netanyahu’s resignation due to the pending corruption cases against him and his chaotic handling of the second wave of the coronavirus.

Finally, as coronavirus cases increase in Lebanon and related restrictions tighten, protests have significantly declined for now (Al Jazeera, 27 July 2020). The protests, which began back in October 2019 against the ruling elite, have turned to protests against the economic crisis and electricity rationing in recent months. On Tuesday, 4 August, a massive explosion occurred at the Beirut port reportedly killing over 100 people, leaving thousands injured, and causing massive damage throughout the city, including damage to vital infrastructure and hospitals (BBC, 5 August 2020). Many people are still missing and the death toll is expected to rise. The cause of the explosion was not immediately clear. Prime Minister Hasan Diab has said that the explosion was caused by 2,750 tons of confiscated ammonium nitrate, an agricultural fertilizer, that was stored at a warehouse at the port (Al Jazeera, 5 August 2020). He did not suggest that the explosion was deliberate. Prior to the explosion, Lebanon was struggling to cope with an economic crisis and the coronavirus pandemic. More information on this explosion will be included in ACLED’s next data release (either as a strategic development which may impact future trends in disorder, or as a political violence event if new information comes to light suggesting the incident was a targeted attack).