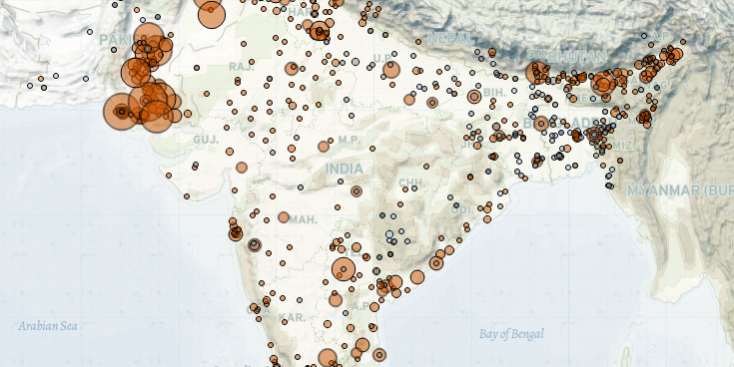 Key trends in South Asia last week include: violence between domestic militants and security forces in India and Pakistan, as well as continuing cross-border clashes between the two countries, and increased tensions between India and China along the Line of Actual Control (LAC).

In India, violence between security forces and domestic militants continued in Jammu and Kashmir (J&K). Earlier this year, it was reported that Indian forces have used the coronavirus lockdown to commit resources towards combating militancy in the region (New India Express, 7 May 2020). Last week, militants targeted security forces with grenades and remote explosives in three separate incidents, resulting in injuries to four Indian security personnel. Security forces also clashed with Jaish-e-Mohammad (JeM) militants in J&K. One JeM militant was reportedly killed in the clash.

Elsewhere in India, clashes between Naxal-Maoist rebels and security forces were reported in Telangana and Odisha states. In Odisha, five Communist Party of India (Maoist) militants and two security personnel were killed during an intelligence-based operation against the Maoists. In Telangana, two Naxal-Maoist rebels were fatally shot by police hours after detonating a landmine in the area. The clash occurred after police received information that Maoists were planning an attack against security forces in the area. Reports suggest that increased Maoist activity in Telangana was related to their call for a ‘bandh’ (general strike) following the killing of a Maoist militant in Chhattisgarh state on 3 September (Hindustan Times, 8 September 2020).

Cross-border clashes between Indian and Pakistani forces continued in the Kashmir region as well. Last week, one Pakistani soldier was reportedly killed in 15 armed clashes along the Line of Control (LoC). ACLED records an increase in the frequency and severity of cross-border clashes between India and Pakistan in 2020. The increase is linked to escalating hostility between the two nations surrounding Indian constitutional changes affecting J&K, and the passage of the 2019 Citizenship Amendment Act (CAA), which is viewed as discriminatory towards Muslims (BBC, 8 August 2019; Al-Jazeera, 16 December 2019).

Meanwhile, in Ladakh union territory, Indian and Chinese security forces reportedly fired warning shots at each other to avoid close combat along the LAC. The foreign ministries of both countries recently agreed to deescalate the extended standoff at the LAC during a meeting in Moscow (Al Jazeera, 11 September 2020). Both sides had previously agreed upon disengagement measures in July, following clashes in June over infrastructure development projects along the LAC. The clashes have led to over 20 fatalities (BBC, 25 June 2020; New York Times, 6 July 2020).

Finally, in Pakistan, Tehreek-i-Taliban Pakistan (TTP) militants attacked a military convoy in Khyber Pakhtunkhwa province. Three militants were fatally shot by security forces in the resulting exchange of fire. This was the first clash confirmed to have been carried out by TTP since two splinter groups, Jamaat-ul-Ahrar (JuA) and Hizbul Ahrar, pledged allegiance to TTP and declared an armed struggle against Pakistan. JuA broke away from TTP in 2014, while the less active Hizbul Ahrar further split from JuA. Both groups have officially been dissolved following their merger with TTP (Al Jazeera, 18 August 2020; Dawn, 6 September 2020). Following the attack, security forces killed a suspected TTP commander and four other militants, while suspected TTP militants attacked another military vehicle, injuring two soldiers.