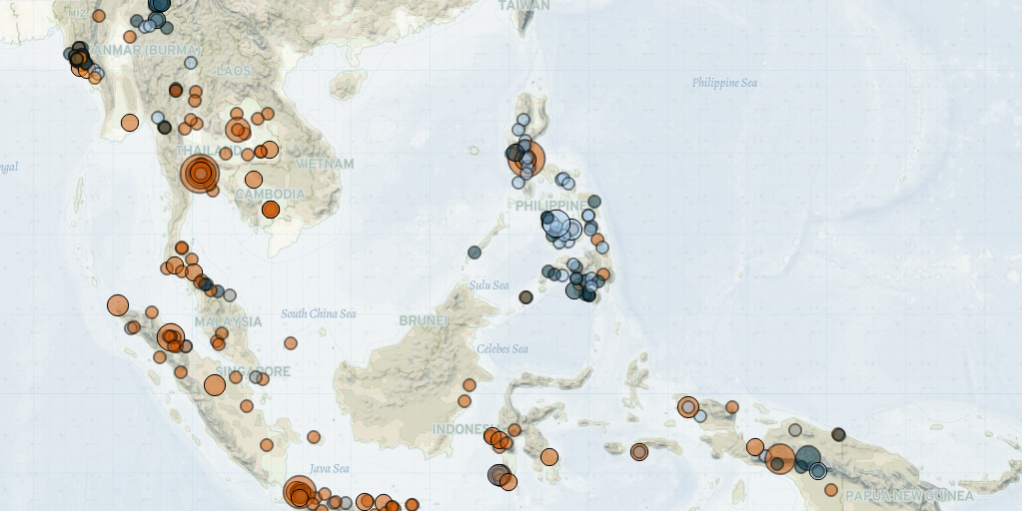 Last week in Southeast Asia, fighting continued between various ethnic armed organizations (EAOs) and the military in Myanmar. In the Philippines, deadly clashes were reported between state forces and Islamist groups, alongside a decrease in fighting with communist rebels. Other key developments include: intra-ethnic clashes in Papua province in Indonesia, and ongoing anti-government demonstrations in Thailand.

In Myanmar, clashes between EAOs and the military were reported almost every day last week, as with the week prior. Fighting between the United League of Arakan/Arakan Army (ULA/AA) and the military was reported in Rakhine and Chin state. It was likewise reported that the military has increased its troop presence in Maungdaw township in Rakhine state (Irrawaddy, 16 September 2020). In Muse township in Shan state, military troops clashed with members of the Northern Alliance, including the ULA/AA, the Kachin Independence Organization/Kachin Independence Army (KIO/KIA), and the Myanmar National Truth and Justice Party/Myanmar National Democratic Alliance Army (MNTJP/MNDAA). Hundreds of villagers in both Shan and Rakhine states have been displaced by the ongoing fighting (BNI, 16 September 2020; Narinjara News, 8 September 2020). The fighting has continued unabated as the country began its election campaign season on 8 September (Associated Press, 8 September 2020). Myanmar’s general elections are scheduled to be held on 8 November, but the recent rise in coronavirus cases across the country has raised concern over the pandemic’s potential impact on the elections (New Mandala, 26 August 2020).

In the Philippines, fighting between Islamist groups and state forces in Mindanao resulted in at least eight fatalities of Abu Sayyaf (ASG) and Dawlah Islamiyah members, including the alleged leader of a local faction (Philippine Daily Inquirer, 10 September 2020). Meanwhile, violence between the New People’s Army (NPA), which has been relatively muted over the past month, remained low last week. The decrease in fighting comes alongside increased reports of NPA members and supporters surrendering and pledging allegiance to the state over the last month (Mindanao Times, 15 September 2020), with last week seeing yet another 150 NPA supporters surrendering (Philippine News Agency, 12 September 2020). Philippine President Rodrigo Duterte has repeatedly insisted that the NPA is the biggest “terrorist” threat to national security (8 July 2020, Rappler). He has also named them a key target of the Anti-Terrorism Act passed earlier this year (South China Morning Post, 26 July 2020).

Armed clashes were also reported in Papua province in Indonesia last week, albeit over tribal disputes. Feuding villagers from different Papuan tribes fought with arrows and other traditional weapons over three days in Jayawijaya regency. Several homes were also burned down. Tensions have been running high between Meagama village in Hubikosy district and Wuka Hilapok village in Pelebaga district since two people, including the head of one of the villages, were killed last month (Kompas, 12 September 2020). Another armed clash between two villages also broke out in Jayapura regency over a border dispute.

Finally, in Thailand, the number of anti-government demonstrations continued on a downward trend last week as anticipation built up ahead of a major rally set to take place on 19 September. The rally, which is set to be held at Thammasat University in Bangkok on the anniversary of the 2006 coup d’état, is expected to be the largest demonstration since the beginning of the movement. This has prompted the Thai government to send out letters to university administrators, calling on them to curb anti-monarchy sentiment and warning that demonstrations could lead to violence (Chiang Rai Times, 14 September 2020). Meanwhile, in a move that could be seen as the government’s attempt to mollify the ongoing protest movement, two prominent leaders of the protest movement, who were jailed for making speeches critical of the monarchy, were released on 7 September (Bangkok Post, 7 September 2020). However, political tensions have remained heightened nonetheless as rumors of another coup — since dismissed by the army commander (Bangkok Post, 8 September 2020) — circulated in Thailand last week (South China Morning Post, 12 September 2020).