This piece provides a deep dive into an actor that is not yet covered in much detail by traditional media; as such, it draws on OSINT, including new media sources, more than traditional ACLED analyses. Some of these sources are not used in ACLED’s data collection, yet the information garnered from them for this piece has been either triangulated or presented with the appropriate caveats.

As the conflict in Yemen continues into its sixth year, the role of the Support and Reinforcement Brigades (SRB) has evolved. The SRB is a pro-Southern Transitional Council (STC) force that traditionally operated as support units for Security Belt Forces (SBF) in Aden and Lahij governorates, but has since taken a more combat-orientated role. Colloquially, and in media sources, SRB and SBF are referred to interchangeably (Chatham House, 27 March 2018). However, the SRB actually seems to exist as a separate entity from the SBF, though likely under its supervision. This is evidenced by the fact that there are five different SRB brigades, commanded by five different generals, which are not geographically bound. This is different from the chain of command of the SBF, which seems to be organized geographically.

That the SRB and SBF are separate entities is evidenced by the fact that the SRB and SBF in Lahij have two different commanders. The SRB is deployed to Lahij (Radfan) under Brigadier General Mukhtar Al Nubi, commander of the 5th Brigade of the SRB (Crater Sky, 01 September 2018; Crater Sky 09 March 2020). Meanwhile, the incumbent SBF commander in Lahij is Jalal ar Rubai (Crater Sky 09 March 2020). Through a flexible common operations room, the two forces seem to coordinate their activities in the area with each other, with the SBF retaining the de facto command.

The SRB has historically deployed to areas after they are captured by the SBF, such as Abyan governorate, with the primary intention of disrupting Al Qaeda activities and improving local security (Aden Time, 12 November 2017; 24, 13 September 2017; Sada al-Haqiqa, 16 June 2017). Occasionally, they have operated as frontline units, as evidenced by the 3rd Brigade’s deployment to the frontlines in Al Hodeidah governorate (Aden Time, 25 December 2018). Other brigades have been present in Ad Dali and Shabwah governorates (Al Bayan, 20 March 2018, Al Arabiya, 25 August 2019). Recently, the SRB has been deployed to the frontlines with greater frequency, as evidenced by the deployments of units from the 1st, 3rd, 4th, and 5th Brigades to the frontlines in Abyan governorate (see map below). Fighters of the 5th Brigade are also active on the Kirsh front in Lahij (Al Mandeb, 4 June 2020; Al Mashhad Al Yemeni, 23 June 2020; Aden News, 23 June 2020; Aden Al Sabaq, 26 August 2020; Al Mandeb, 7 September 2020). The recent deployments to the frontlines in Abyan and elsewhere represent the most significant change to the SRB since their inception.

The SRB was initially established by decree by President Abdrabbuh Mansur Hadi in March 2016 under the command of the Ministry of Defense as part of the Hadi 4th military zone (Aden Time, 5 October 2016).1 According to the UN, since its inception, the SRB and SBF have not fully recognized the Hadi government’s authority, as they have operationally followed orders from UAE advisors (UNSC, para. 25, 28 April 2020) According to the decree, which was obtained by Aden Time, the SRB forces initially consisted of four brigades. Talking to Aden Time, Hani Bin Braik, now Vice-President of the STC, explained that the SBF were actually initially a brigade of the SRB in 2016 (Aden Time, 5 October 2016). However, this has changed over the years as the SRB developed a command structure linked to, but autonomous from, the SBF’s command.

The SBF and the SRB are, at time of this writing, often referred to by Yemeni media sources interchangeably, with a higher mention of the SBF. The SRB is colloquially understood to be the same as the SBF — acting as ‘support units’ as outlined above. In the same vein, articles frequently only mention “Southern Transitional Council (STC)-forces.” As the STC is not a fighting force, per se, but the political organization of a rebel group, its military objectives are pursued by different forces, including the SBF, the SRB, and the Asifah Brigade, among other forces. The SBF is the most active force in most clashes, which is why ACLED default-codes the SBF for generic media-mentions of “Southern Transitional Council-forces.” Incidents involving the SRB are thus under-represented in the ACLED dataset due to this reporting bias. 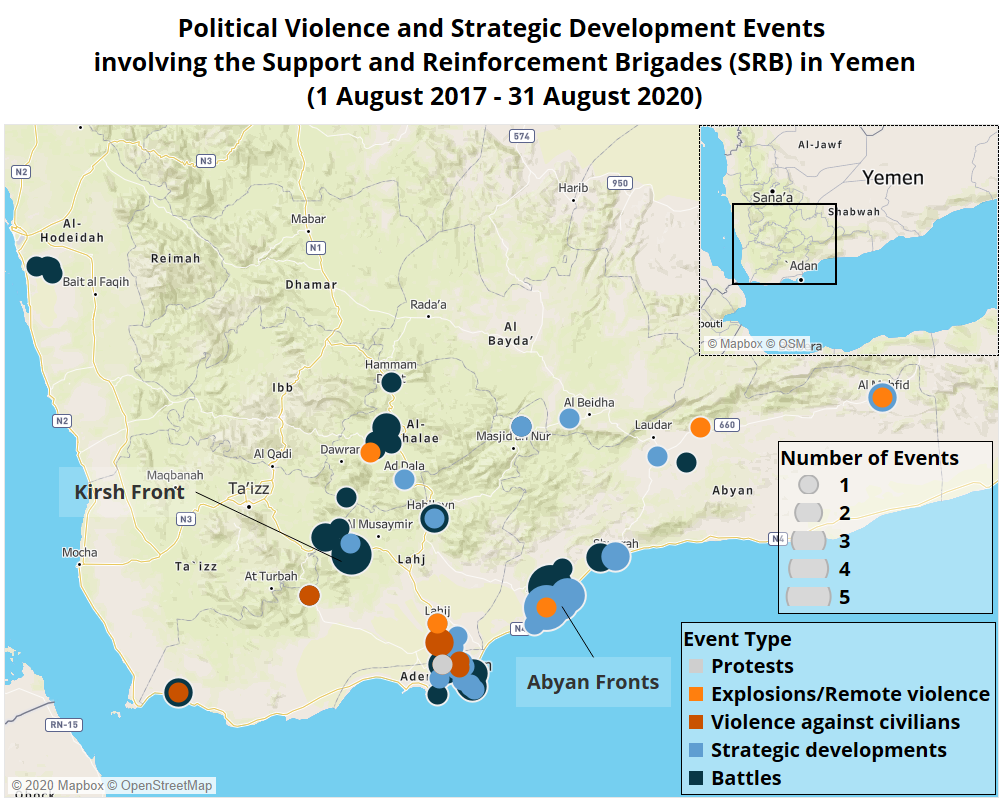 Four of the six commanders, Muhsin Al Wali (commander-in-chief), Nasr Atif Al Mashushi (1st Brigade), Nabil Al Mashushi (3rd Brigade), and Hidar Ash Shawhati (4th Brigade), are from the Yafa area on the Abyan-Lahij border (Twitter, 6 October 2019; 4 May, 9 April 2020). A fifth commander, Mukhtar Al Nubi (5th Brigade), is from the Radfan area west of Yafa, which is also understood to be part of the broader Yafa area. Only the commander of the 2nd Brigade, Muhammad Ali Mahdi (Suqrat), is likely from or was raised in Aden, as evidenced by his father’s, uncle’s, and his own personal ties to the Aden United football club (Aden Sport, 24 March 2017).

The first mention of the SRB as separate from the SBF did not appear until July 2017. Subsequently, a flurry of reports were published on the brigades, especially the 1st Brigade under the command of Munir Al Yafai (aka Abu Al Yamamah), who was killed on 1 August 2019 (Huna Aden, 30 July 2017; Al Mashhad Al Araby, 16 Dec 2017). He was replaced by Nasr Atif Al Mashushi. At time of this writing, a total of five numbered brigades (1-5) are reportedly part of the SRB, in addition to other units, such as the Facilities Protection Force. This group appears to have been established as a brigade of the SRB, but has become independent since its inception (Aden Time, 14 November 2017).

With the outbreak of fighting between pro-STC and pro-Hadi forces in August 2019, and the establishment of the Asifah Brigade,2For more on the Asifah Brigade, see the previous installment of this ACLED series. several units of the SRB have been deployed to the frontlines in Abyan governorate (see Appendix 1). The 1st Brigade, under the command of Nasr Atif Al Mashushi, is active in the clashes between pro-STC and pro-Hadi forces on the At Tariyah, Ash Shaykh Salim, and Shuqrah fronts in Abyan governorate (Sma News, 4 June 2020; Yafaa News, 16 June 2020). It was previously active alongside the Asifah Brigade in Ash Shaykh Uthman and Dar Saad districts of Aden (Al Wattan, 10 March 2020).

The 2nd Brigade, commanded by Muhammad Ali Mahdi, aka ‘Suqrat’, was deployed in the Shuqrah area as of late March (Al Mashhad Al Yemeni, 29 March 2020). However, no information on its activity has been published since the outbreak of hostilities in the area. Despite the lack of definite information on the current deployment of the 2nd Brigade, it appears to be deployed in Aden as part of the Presidential Guards (Aden al Ghad, 17 September 2020).

The 3rd Brigade, under the command of Nabil Al Mashushi, was withdrawn from frontlines in Al Hodeidah and redeployed to At Tariyah, north of Zinjibar city, after the outbreak of clashes between pro-STC and pro-Hadi forces (South 24, 13 June 2020; Tahdeeth, 15 June 2020). In late August, units from the 3rd Brigade were reportedly redeployed from Abyan to Tawr Al Bahah in Lahij, where they reportedly clashed with pro-Islah forces (Al Mashhad Al Janubi, 31 August 2020).

Lastly, the 5th Brigade, commanded by Mukhtar Al Nubi, has primarily provided security and assistance in Aden and Lahij governorates, but was recently deployed to active frontlines in Abyan and Lahij. From mid-August 2019 until late March 2020, the brigade operated in Craiter district and had its base in Camp 20 until it was replaced by the Asifah Brigade (ACLED, 13 August 2020; Al Hezam Media, 21 August 2019; Al Masdar, 24 March 2020). It then relocated to Lahij governorate and was deployed to defend frontlines on the Kirsh front and provide security in Radfan district (ACLED, 13 August 2020; Al Hezam Media, 10 May 2020; Nukhba Hadramawt, 16 June 2020). Recently, units from the 5th Brigade arrived on the frontlines near Zinjibar city (Aden Al Sabaq, 26 August 2020). However, the majority of the 5th Brigade is still active on the Kirsh frontline, on the Lahij-Taizz border (Al Mandeb, 7 September 2020). 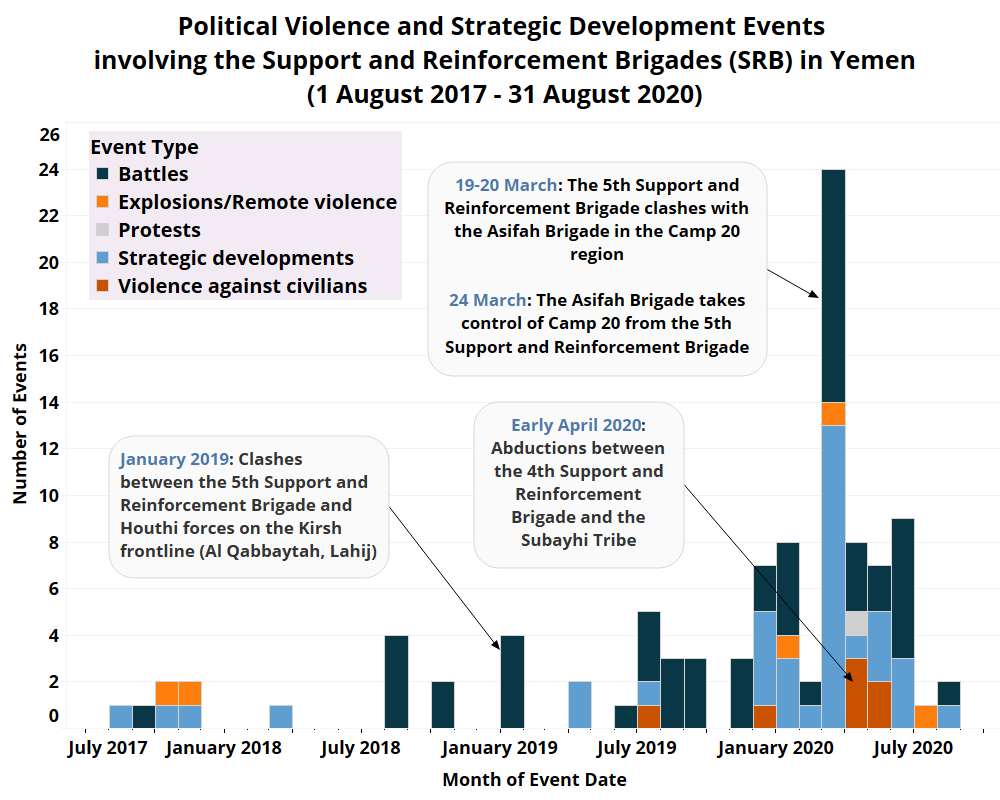 These deployments of the SRB to frontline duty — in lieu of their traditional duty of security provision and support — may indicate a change in how they are perceived by STC leaders. The Asifah Brigade appears to have supplanted the SRB in providing security in Aden, with the leader of the brigade emphasizing the rule of law and imposition of order, implying the SRB failed to accomplish these goals (Aden al Ghad, 7 June 2020). However, the SRB’s replacement by the Asifah Brigade in Aden should not be viewed as the SRB falling out of favor with STC leaders. SRB commanders have an established history working for STC-affiliated forces. For instance, all SRB commanders received their SRB command after serving as commanders in the Southern Resistance, SBF, or both. As such, the increased security responsibilities of the Asifah Brigade at the expense of the SRB should be considered as the beginning of the SRB’s possible transition from a security-focused force into a more combat-capable force.3SRB commanders are often sent to inspect and raise the morale of other pro-STC units in Lahij, Aden, and Abyan, indicating that they are well regarded by leaders in the STC and soldiers in other pro-STC units. See Al Youm 8, 6 June 2019 and Aden al Ghad, 2 October 2019.

The development of the SRB from auxiliary units into ones capable of handling sustained frontline duty across different governorates will be closely monitored. While they are often referred to interchangeably with the SBF, and therefore difficult to adequately track, the structure of the SRB indicates they are indeed a unique fighting force, albeit intimately interlinked with the geographically bound SBF. It remains to be seen if the recent deployment to the frontlines in Abyan and Lahij represents a new direction for the SRB — especially in the context of its replacement by the Asifah Brigade as the security force in Aden — or if it is a signal of pro-STC fighting forces being stretched thin fighting the internationally recognized Hadi government and Houthi forces.