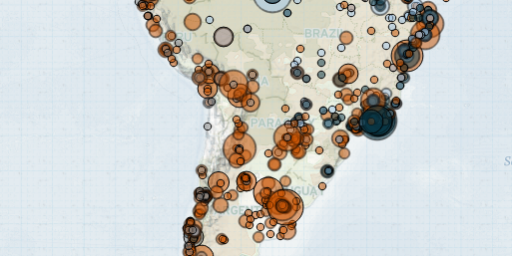 Last week in South America, demonstrations over coronavirus-related issues increased across the region. Political killings continued to be reported in Colombia, as well as an increase in political tensions in Bolivia over the upcoming presidential elections. In Chile, indigenous militia activities remained high, while in Brazil, armed clashes continued to take place between criminal groups and state forces.

The number of pandemic-related demonstrations increased across the region, as the political and economic impact of the pandemic led to several demands from citizens. In Brazil, labor groups continued to stage protests to demand the return of normal operations for businesses,  such as restaurants, tourism agencies, and entertainment activities. In Argentina, there was a significant increase in the number of demonstration events, as anti-government groups continued to reject the government’s decision to extend quarantine measures in the country, following an increase in the number of coronavirus infections. Nationwide protests took place on 13 and on 19 September. The demonstrators also repudiated the judicial reform bill, claiming it would protect the Vice President, Cristina Kirchner, from corruption and criminal charges.

In Ecuador, dozens of workers, teachers, and students carried out demonstrations across the country against budget cuts and layoffs. The demonstrations follow a Supreme Court decision that revoked a precautionary measure, which aims to prevent the implementation of public budget cuts during the pandemic. Meanwhile, in Guyana, a prison riot broke out during the visit of two government ministers, as prisoners on hunger strike demanded better hygiene conditions amidst a coronavirus outbreak among prisoners. Two prisoners were shot dead during the clash with prison guards.

In Bolivia, tensions continue to build in the lead up to a contested presidential election expected to take place on 18 October. Clashes between supporters of the Movement Towards Socialism (MAS), the political party of former President Evo Morales, and supporters of other candidates have been reported in several cities, including in Cochabamba, Oruro, and El Alto. On 17 September, President Jeanine Añez dropped out of the presidential race, claiming she aimed to unite the conservative vote to face the current front-runner, MAS candidate Luis Arce (New York Times, 17 September 2020).

In Colombia, political killings continue to take place at high rates across the country, with eight fatalities reported in Antioquia, Cauca, Narino, and Norte de Santander departments. Social leaders and members of vulnerable communities, such as farmers and indigenous groups, continue to be targeted by armed groups in ongoing disputes over smuggling and drug-trafficking routes. In Meta and Cauca departments, armed clashes were also reported between different dissident Revolutionary Armed Forces of Colombia (FARC) Fronts and military forces, with one dissident FARC member killed.

In Chile, tensions between indigenous people and police forces continued in the south of the country. In Ercilla area, Araucania region, suspected indigenous militia members ambushed two police check-points, resulting in two officers injured. Two drivers of private logging companies were also reportedly injured after being shot by suspected indigenous militia members in Tirua area, Biobío region. In the past month, there has been an increase in attacks against civilians and armed clashes involving indigenous militia groups, as indigenous communities push forward their demands, including the right to autonomy and return of their ancestral lands (for more, see this recent ACLED piece).

Clashes between criminal groups and state forces continued in Brazil last week, while organized criminal groups clashed amongst themselves. At least 47 people were reportedly killed in such clashes. In Catingueira city, Paraíba state, six gang members were killed after exchanging fire with military police officers. The group had blown up a bank agency in the area three days before. In Macapá city, Amapá state, the killing of a drug trafficker by a rival group led to a series of retaliatory attacks, with nine reported deaths of drug-traffickers in only 16 hours.

In the state of Rio de Janeiro, civilians continue to be caught at the crossfire as criminal groups fight for territorial control. A three-year-old child was shot and injured in Duque de Caxias city, while a man was killed by a stray bullet in the North Zone of Rio de Janeiro, Complexo do Lins neighborhood. In Nova Iguaçu city, armed men opened fire at a child’s birthday party, killing one man and injuring an elderly woman and a seven-year-old child.