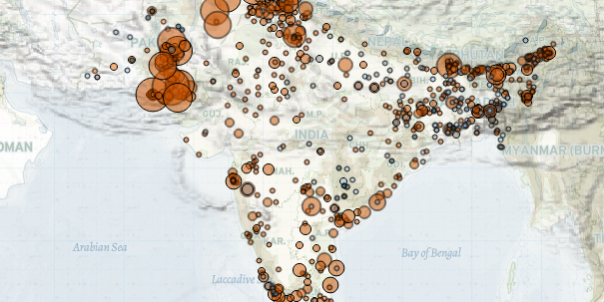 In Pakistan, violence continued between suspected Tehreek-i-Taliban Pakistan (TTP) militants and security forces in Khyber Pakhtunkhwa province. Three militants and two soldiers were reportedly killed during separate armed clashes in the province. An IED explosion triggered by militants killed another soldier at a military check post. In Balochistan province, Baloch Liberation Front (BLF) militants exchanged fire with Pakistan military forces, resulting in four BLF fatalities. This was the second attack claimed by BLF during the month of September. Earlier this month, BLF militants set off an IED, which killed three soldiers. Baloch separatist groups have a long history of challenging the government of Pakistan for increased provincial autonomy and an independent Balochistan state. ACLED records an increase in Baloch separatist activity during 2020, indicating a resurgence of armed Baloch separatism in the region (for more on Baloch separatism, see this recent ACLED report).

In India, clashes between militants and security forces continued in Jammu and Kashmir (J&K). Security forces clashed with Hizb-ul-Mujahideen (HM) militants, resulting in one civilian and three HM fatalities. Militant groups active in the region include HM, Jaish-e-Mohammad (JeM), and Lashkar-e-Taiba (LeT), among others, and are comprised of both local and foreign militants. The various groups active in J&K have historically sought independence from India or a merger with Pakistan. More recently, an ideological shift has been observed in the region, with militants seeking to establish Islamic rule in J&K (The Print, 11 January 2020). Earlier this year, it was reported that Indian forces have used the coronavirus lockdown to commit resources towards combating militancy in the region (New India Express, 7 May 2020). Recently, the Indian Army deployed 3,000 additional troops across the Line of Control (LoC) to prevent infiltration attempts by militants from Pakistan (Kashmir Express, 20 September 2020). Border security forces averted two such infiltration attempts by militants in Samba and Bandipora districts last week. Cross-border clashes between Indian and Pakistani forces continued along the LoC as well. Eleven clashes and one civilian fatality were reported.

Elsewhere in India, Naxal-Maoist rebels abducted and killed a Chhattisgarh Armed Forces (CAF) constable in Bijapur district of Chhattisgarh state. Security forces also recovered letters between Communist Party of India (Maoist) [CPI (Maoist)] leaders, indicating that 23 Maoists had been killed in a clash that took place in Sukma District of Chhattisgarh state on 21 March, 2020. Previously, CPI (Maoist) claimed that only three of their cadres were killed in the encounter. Maoists usually avoid disclosing their casualty numbers in order to maintain morale among their ranks (Hindustan Times, 12 September 2020). Additionally, the Maoist correspondence revealed disruptions to their supply chain of rations and medicine in Chhattisgarh due to the coronavirus pandemic and constant security check posts along inter-district and interstate borders (South Asia Terrorism Portal, 13 September 2020).