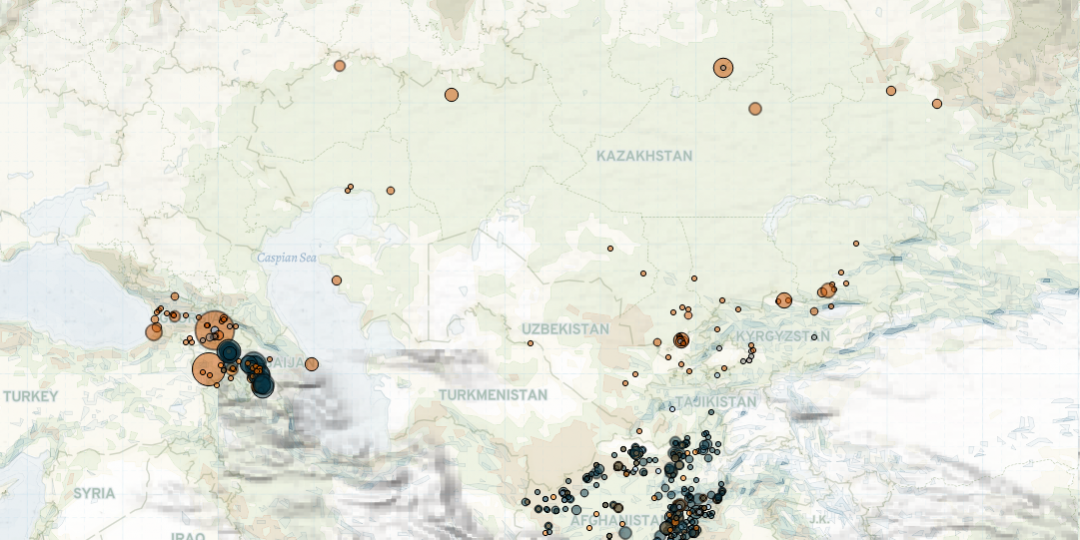 Last week in Central Asia and the Caucasus, battles along the Line of Contact between Azerbaijan and Artsakh increased, resulting in dozens of casualties among state forces and civilians. Meanwhile, ethnic Armenians living in Georgia reacted to the clashes by blocking highways to stop alleged Turkish aid to Azerbaijan. They also accused the Georgian government of stopping humanitarian aid collected by the community from reaching the de facto Artsakh republic. The deadlock in the intra-Afghan talks persisted as clashes between Afghan forces and the Taliban continued. Election-related violence was reported in Georgia due to the approaching parliamentary elections on 31 October. Meanwhile, in Kyrgyzstan, opposition groups clashed with police and seized government buildings after the announcement of election results.

Large-scale battles continued between Azerbaijan, Armenia, and the de facto state of Artsakh last week. The clashes started on 27 September, as Armenia and Azerbaijan traded accusations over ceasefire violations and attacks on one another. The use of heavy artillery, drones, and airstrikes were reported along the Artsakh-Azerbaijan and Armenia-Azerbaijan Lines of Contact (LoC). The most intensive confrontations took place in the southern part of the Artsakh-Azerbaijan LoC, in the direction of Jabrayil and Fuzuli regions, and in the direction of northeastern Talish and Mataghis regions. Armenian and Artsakh authorities reported that Azerbaijani forces shelled the Gegharkunik region, Stepanakert, Shushi, and other civilian settlements in Artsakh. The Azerbaijani side claimed that Armenian military forces targeted Ganja, Terter, Mingachevir, and bordering villages. Although casualty reports have differed, over a dozen civilian deaths were reported in the de facto Republic of Artsakh, while Armenia and Azerbaijan also confirmed civilian deaths in their territories. While Azerbaijani authorities did not release the exact number of military casualties, sources from Artsakh and Armenia reported that dozens of soldiers from all sides had been killed. From 27 September to 3 October, along the Artsakh-Armenia-Azerbaijan LoC and in Stepanakert city, ACLED records over 90 armed conflict events, including battles, airstrikes, downed drones, as well as shelling and artillery attacks targeting both civilians and security forces. At the end of the week, the President of Azerbaijan, Ilham Aliev, claimed that the military forces of Azerbaijan captured more than ten settlements in Artsakh, though Artsakh authorities denied the claim.

The response by the international community has been quick, but so far ineffective. Immediately after the start of the latest clashes, the co-chairs of the Organization for Security and Cooperation in Europe (OSCE) Minsk group and the UN called on both sides to stop military actions. Russian, French, and German officials also held talks with the leaders of both countries. However, the clashes are likely to escalate further as Artsakh and Azerbaijani authorities insist that the other should cease attacks first (RFE/RL, 4 October 2020). Moreover, Turkey announced its military support for Azerbaijan early in the week; reports of Turkey sending Turkish-backed Syrian fighters from northern Syria to Azerbaijan further complicates the situation (Reuters, 28 September 2020). Azerbaijan and Turkey have long been allies in the Nagorno-Karabakh conflict and the two countries conducted large military drills close to the Armenian border after clashes in July 2020 (International Crisis Group, 2 October 2020).

The fighting in the Artsakh region triggered a wave of protests among ethnic Armenians living in Georgia. In the Javakheti region of the country, where the population is mostly ethnic Armenians, people gathered food and medical aid to send to Artsakh. However, the Georgian government did not allow aid trucks to cross the border into Armenia. This led to around one thousand ethnic Armenians protesting near the border, accusing the government of preventing the delivery of humanitarian aid (JAM News, 1 October 2020). On the night of 29 September, the Turkey-Georgia international highway was also blocked by ethnic Armenian demonstrators, as they claimed that the trucks from Turkey were carrying arms to Azerbaijan.

In Afghanistan, violence continued between the Taliban and Afghan forces. Afghan forces took control of four villages in Ali Abad district of Kunduz province, while the Taliban gained control of large areas in Yawan district of Badakhshan and Namak Ab district of Jowzjan province. Afghan forces also conducted airstrikes in Urozgan, Zabul, Baghlan provinces, leading to over 40 Taliban fatalities. The Taliban carried out a suicide bombing in Nahri Saraj district of Helmand province and targeted Afghan police and military units with remote explosives in Herat, Ghazni, and Khost provinces. ACLED also records at least 20 civilian fatalities resulting from Taliban-planted explosives in Ghor and Daykundi. Targeted killings continued as well. The Taliban killed a prosecutor in Khost, and unidentified gunmen opened fire in Kabul on the car of Maidan Shar city’s mayor. Her driver managed to escape the attack.

Meanwhile, President Ashraf Ghani flew to the Qatari capital, Doha, as peace talks between his government and the Taliban continued. Ghani will meet Qatari officials to seek their support in convincing the Taliban to announce a ceasefire (Al Jazeera, 5 October 2020). The peace talks have recently been stalled as the Taliban insists on a jurisprudence system based on Hanafi values, the Islamic school adhered to by the group. The Afghan government has reservations about this jurisprudence system (TOLO News, 4 October 2020).

In Georgia, in the lead up to the parliamentary elections on 31 October, tension between supporters of the ruling Georgian Dream party and the opposition has grown. Last week, members of the opposition United National Movement party clashed with Georgian Dream supporters in the Bolnisi region and in Marneuli city, resulting in dozens of injuries. Journalists were also beaten during the clashes, drawing reactions from international organizations (RFE/RL, 1 October 2020).

Meanwhile, in Kyrgyzstan, parliamentary elections were held on 4 October. Only four parties out of 16 passed the 7% electoral threshold, meaning that many opposition parties did not win seats in parliament (BBC, 6 October 2020). The two frontrunner parties, Birimdik and Mekenim Kyrgyzstan, received almost half of the votes (Reuters, 4 October 2020). On 5 October, thousands of supporters from opposition parties gathered in Bishkek, protesting against the election results. They alleged that vote-buying and other irregularities marred the polls. The opposition also claimed that only parties with close ties to the country’s current president won seats in parliament (BBC, 6 October 2020). On the evening of 5 October, a demonstration organized by 12 opposition parties turned violent after a group of people attempted to enter the presidential house and threw rocks at policemen. Despite the rubber bullets and stun grenades used by the police officers, the demonstrators seized the headquarters of the government near midnight (RFE/RL, 6 October 2020). They also entered the jail of the State Committee of Security in Bishkek and freed former President Almazbek Atambayev and other jailed politicians. Atambayev was arrested in 2019 on charges of corruption (TASS, 7 August 2019).

On 6 October 2020, after violent demonstrations, the Central Election Committee of Kyrgyzstan annulled the election results (RT, 6 October 2020). The opposition continues to control most government buildings, including parliament, the municipality buildings of Bishkek, and several ministries. As the newly-formed coordination committee appointed new people to key positions in the country, the whereabouts of President Sooronbay Jeenbekov remain unknown (VLAST.kz, 6 October 2020).

Asena Karacalti is the South Asia Assistant Research Manager at ACLED, mainly overseeing the Afghanistan dataset.She holds a BA in Law, and an MSc in Cultural Anthropology and Development Studies from KU Leuven, Belgium. Her research interests focus on the transit experiences of migrant and refugee populations and political violence across the Middle East and North Africa. She has past experience as a lawyer and as an expert in migration and asylum organizations.She has previously worked as the Central Asia & the Caucasus, and Africa Research Manager at ACLED.
Vardan Ghaplanyan

Vardan Ghaplanyan is an Armenia-Azerbaijan Researcher at ACLED. He has a PhD in International relations and history focusing on regional conflicts in the Caucasus. His research interests include international history, conflict, and political developments in the Caucasus and neighboring countries.
7 October 2020
Share
TweetShare on Twitter Share on FacebookShare on Facebook Share on LinkedInShare on LinkedIn