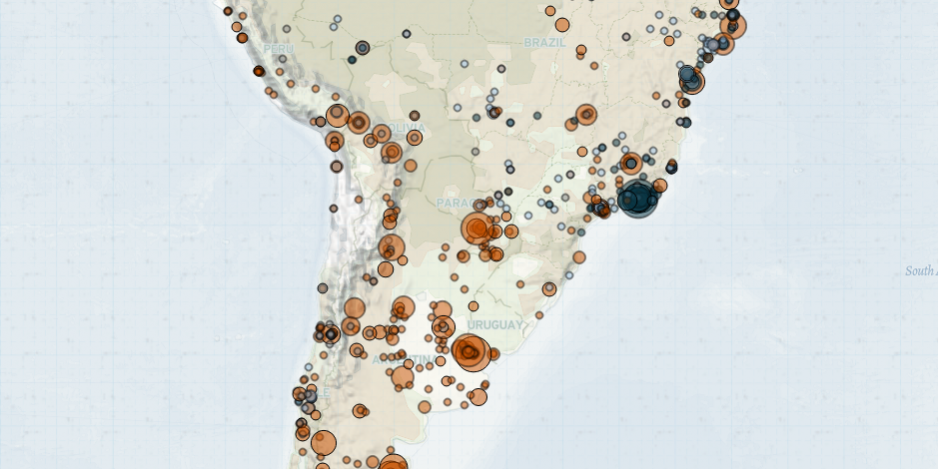 Last week in South America, demonstrations over coronavirus-related issues decreased across the region. Political killings continued to be reported in Colombia, while upcoming elections and referendums increased tensions in Brazil, Chile, and Venezuela. In Peru, protests by indigenous groups were reported. In Brazil, armed clashes continued between criminal groups and state forces.

The number of pandemic-related demonstrations decreased across the region last week. In Argentina, farmers blocked highways for five days in a row in Mendoza, Córdoba, La Pampa, Santa Fé, and Buenos Aires provinces. The blockade was part of a demonstration to demand flexibility of the rules for entering San Luis province, since different biosafety protocols for each state made it difficult for farmers to sell their produce. In Brazil, transportation workers, teachers, and other labor groups staged protests to demand financial assistance during the pandemic. Similar protests were carried out by entertainment workers in Chile, while teachers across the country protested against the reopening of schools. In Bolivia, for four consecutive days, parents of students blocked several streets in Sucre city. They demanded that schooling incentives, such as the breakfast bonus, be distributed in cash as classes have been suspended since the onset of the pandemic. The blockade of roads surrounding Sucre airport led to its temporary closure.

In Venezuela, demonstrations increased significantly across the country, with citizens continuing to demand access to basic services. The demonstrations have concentrated on the shortage of fuel, which has been exacerbated by the pandemic. One demonstrator was killed during a clash with state forces in Cariaco, Sucre state. Meanwhile, teachers, health workers, and pensioners from state companies also took to the streets to demand better working conditions and higher salaries. The country faces a severe economic crisis and the collapse of public services. While parliamentary elections are expected to take place on 5 December, the opposition announced it will boycott the polls, creating uncertainty (Al Jazeera, 1 July 2020; Venezuela Analysis, 26 July 2020).

In Colombia, political killings significantly decreased across the country, with six fatalities reported in Cauca, César, Chocó, Valle del Cauca, and Risaralda departments. Social leaders and members of vulnerable communities, such as farmers and indigenous groups, are often targeted by armed groups in ongoing disputes over smuggling and drug-trafficking routes. Since April 2020, there has been an average of over 6 killings of social leaders and members of vulnerable groups reported each week. This increased to over 10 killings a week, on average, by the end of August 2020, when the nationwide coronavirus lockdown was lifted (for more, see this recent ACLED piece).

In Chile, tensions started to build in the lead up to a referendum to decide on the writing of a new constitution. The referendum is expected to take place on 25 October. In Santiago, at least 16 people demonstrating in favor of the draft of the new constitution were arrested after clashes with state forces. During the clash, a teenager was pushed from a bridge by a police officer, falling into the Mapocho river. The victim sustained a number of fractures, although his condition is considered stable.

In Peru, members of several indigenous communities occupied for four days in a row the 5th station of Petroperu, the state oil company, located in Felix Flores, Loreto department. They demanded from authorities the completion of development projects in their communities, as provided for by previously signed agreements with the regional government. In Peru, mining and oil extraction are the main sources of tension between indigenous groups and the government, given the exploitation of indigenous land (Comissão Pastoral da Terra, 23 September 2020).

In Brazil, several attacks against electoral candidates were reported this week in the lead up to municipal elections expected to take place on 15 November. In Nova Iguaçu city, Rio de Janeiro state, a candidate for councilor from the Labor Christian Party (PTC) was shot to death and another two people were injured. At least three other candidates were attacked and injured in separate events in Ceará and Paraíba states. The candidates attacked are affiliated with the Workers’ Party (PT), Republican Party of the Social Order (PROS), and the Brazilian Republican Party (PRB). More than 100 attacks and threats against candidates have been reported so far in 2020 (The Intercept, 29 September 2020).

Clashes between criminal groups and state forces declined slightly in Brazil last week, while organized criminal groups clashed amongst themselves. At least 36 people were reportedly killed in all clashes. In Fortaleza city, Ceará state, four gang members were killed in a clash with military police forces. Hours later, a retaliatory attack in the same area ended with a child killed by stray bullets. In Cáceres city, Mato Grosso state, four suspected drug traffickers were killed by federal police forces during a patrol. In Pólvora island, Espírito Santo state, four men were killed by suspected gang members in what was believed to be a drug-trafficking dispute. Analysts claim that the recent increase in violence levels across the country can be attributed to intensified disputes between different criminal groups, over power and territory (G1, 16 July 2020).