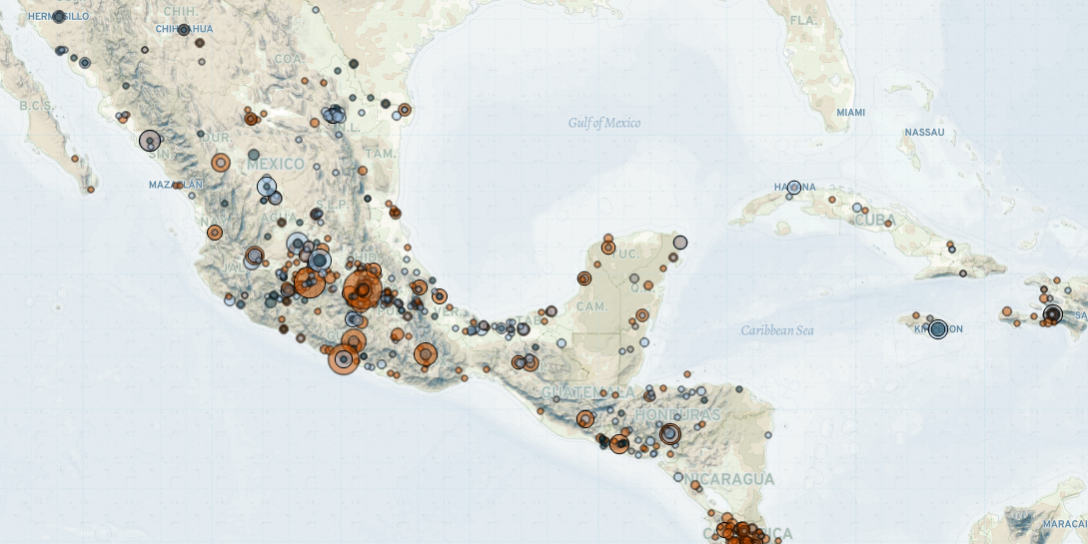 Last week in the Mexico, Central America, and Caribbean region, demonstrations against tax reforms soared in Costa Rica, as the government negotiated a financial aid package with the International Monetary Fund (IMF). In Mexico, women demonstrated across the country on the International Safe Abortion Day, calling for the legalization of abortion. Teachers in Mexico continued to demand bonuses and automatic job placements for graduates of Normal schools amid important budget cuts planned for the education sector. Likewise, in Mexico, levels of violence in the state of Guanajuato remained high with attacks targeting businesses. In Cuba, activists continued to be persecuted while protesting or because of their political activities. Similarly, in Honduras, an environmental activist known for his activism against a dam project was killed by unidentified armed men, as was a journalist investigating corruption and decrying LGBT violence.

In Costa Rica, demonstrations spiked against tax reforms proposed by the government as part of on-going negotiations with the IMF. Last week, the country was paralyzed by nationwide roadblocks, coordinated to a great extent by the National Rescue Movement. The movement emerged from a coalition of labor unions, small businesses, and landowners during the coronavirus pandemic. It has advocated for the resumption of economic activities. Demonstrators pressured the government into withdrawing from the first stage of negotiations with the IMF over a $1.75 billion loan (CR Hoy, 5 October 2020). The financial aid package aims to stimulate the Costa Rican economy which has been affected by the closing of business during the coronavirus pandemic. As a result of the wave of demonstrations, the Costa Rican President announced on 4 October the withdrawal of the proposal, further postponing negotiations with the IMF (Reuters, 5 October 2020).

In Mexico, nationwide demonstrations were recorded on International Safe Abortion Day, with women calling for the legalization of abortion in at least 37 cities. Though the majority of these demonstrations were peaceful, clashes with police officers were reported in Tijuana and Ciudad de México. Earlier this year, the Mexican Supreme Court rejected an injunction decriminalizing abortion in the state of Veracruz, a decision that could have paved the way for the legalization of abortion in other states. To date, abortion is legal in only two of the 32 Mexican states (BBC, 29 July 2020).

Meanwhile, teachers continued to demonstrate and block train tracks mainly in the Mexican state of Michoacan. They called for the payment of bonuses and automatic job placements for teaching graduates of Normal schools. Members of the National Coordination of Education Workers (CNTE), one of the largest teachers’ unions in Mexico, demanded the allocation of additional funds to the education sector following the announcement of severe cuts in the 2021 federal budget. In March, the President of Mexico promised that additional Normal teaching schools would be created. However, the 2021 budget includes a 95% drop in funds allocated to these educational institutions that train high school graduates to become teachers (Animal Politico, 10 September 2020).

Meanwhile, gang activities and violence against civilians remained high in Mexico last week. In the state of Guanajuato, violence has spiked since the arrest of El Marro, the leader of the Santa Rosa de Lima Cartel, in early August. In Jaral del Progreso, 12 people were reportedly killed in an attack in a restaurant, while in Celaya, another targeted attack was reported inside a shop. These attacks could be related to business extortions perpetrated by gangs in order to finance turf wars (El Universal, 28 September 2020), as the state of Guanajuato has been long disputed by the Santa Rosa de Lima Cartel and the Jalisco New Generation Cartel (CJNG). The spikes of violence observed immediately before and after the arrest of El Marro indicate that the two rival organizations resumed fighting, despite a short-lived truce announced by the CJNG in the beginning of August (Infobae, 29 September 2020).

Political activists and journalists continue to be the targets of attacks and violent repression in the region. In Havana, Cuba, police arrested Maykel Osorbo, a rapper known for decrying political repression in his songs. He is also affiliated with the San Isidro Movement opposition group, a collective of artists promoting freedom of expression. Meanwhile, in Placetas, a group of five women were detained as they demonstrated and demanded the release of political prisoners. The demonstrators were reportedly beaten by police forces while in detention.

Finally, in Honduras, an environmental activist was shot and killed in Patuca, Olancho. The activist was known for his involvement in an environmental conflict between local residents and the National Energy Company (Enee) over the operation of a dam in the area. In 2017, Global Witness described Honduras as the deadliest country in the world for environmental activism, with many activists killed for opposing dam, logging, or mining projects (Global Witness, 31 January 2017). In addition, two armed men shot and killed a journalist in Comayagua. The journalist had been known for his investigative work into corruption involving business owners, politicians, and drug-trafficking networks. He had also extensively condemned violence targeting members of the LGBT community.