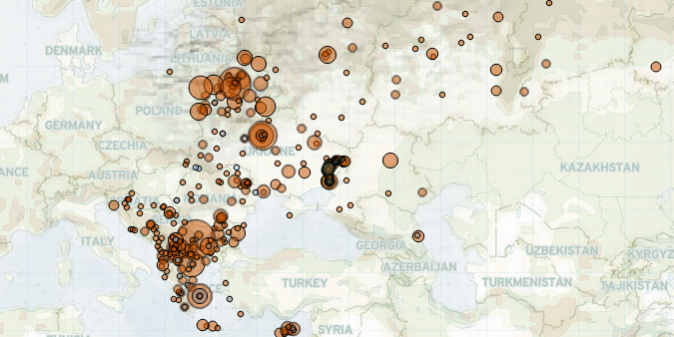 Last week, demonstration activity across Eastern Europe continued at generally low levels. Major demonstrations continued in Belarus against the authoritarian regime of Alexander Lukashenko. Large demonstrations took place in Greece ahead of the announcement of a guilty verdict in the trials of the Greek neo-Nazi organization Golden Dawn.

In Belarus, authorities continued to crackdown on demonstrations against the authoritarian regime of Alexander Lukashenko. One hundred thousand people took to the streets in Minsk and in several major cities on 4 October, demanding the release of political prisoners (RFE/RL, 4 October 2020). Alexander Lukashenko met for the first time with several jailed members of the opposition, indicating an interest in maintaining a dialogue with the opposition (RFE/RL, 10 October 2020). Lukashenko likely held this meeting in an attempt to increase the legitimacy of certain parts of the opposition, particularly the ones under his physical control. Meanwhile, Belarusian opposition leader, and likely winner of the August elections, Svetlana Tikhanovskaya issued an ultimatum to Lukashenko. She declared that he must leave office by 25 October and halt the ongoing repression of demonstrators or face a nationwide strike (The Moscow Times, 14 October 2020). Lukashenko is unlikely to accept this demand, though if the national strike gains enough momentum, it may undermine regime stability.

In Russia, demonstrations in support of the former governor of Khabarovsk Sergei Furgal continued. Police dispersed the weekly Saturday demonstration in Khabarovsk for the first time. They arrested over 25 people and injured some in the process (BBC, 10 October 2020). This change in police behavior is likely intended to end the Khabarovsk demonstration movement given the weeks of decline in momentum by the movement, increasing rates of coronavirus cases in Russia, and looming worsening weather conditions as winter approaches.

In Greece, more than 20,000 people rallied in Athens to hear the announcement of the verdict in a pivotal case against the neo-Nazi organization Golden Dawn. Demonstrators across the country demanded justice for the victims of the far-right organization and celebrated the landmark guilty verdict. Shortly after the announcement, police clashed with a few hundred rioters. The demonstrations have otherwise been mostly peaceful (The Guardian, 7 October 2020; Amna, 7 October 2020).

In Cyprus, the decision by the government of Northern Cyprus to reopen part of the vacant town of Varosha — which legally belongs to Greek Cypriots though is de facto controlled by Turkish-backed Northern Cyprus — provoked demonstrations by the original inhabitants. The decision to reopen the town violates UN resolutions and undermines the resumption of discussions on a resolution of the Cyprus conflict. The move collapsed the government of Northern Cyprus after several parties left the governing coalition two days before the presidential elections on 11 October. It is seen as an electoral strategy by the right wing Ersin Tatar, Turkish President Erdogan’s preferred candidate, to strengthen his electoral bid against moderate candidate Mustafa Akinci. No candidate won a majority of votes in the election, meaning a second round of votes is scheduled for 18 October. This move demonstrates Turkey’s desire to maintain its presence on the island amid ongoing tensions with Greece over territorial disputes in the Eastern Mediterranean.

In the Donbas region of Ukraine, fighting between Ukrainian government forces and Russian-led separatists remained at very low levels, with 15 armed clashes and 32 shelling incidents last week with no fatalities reported.