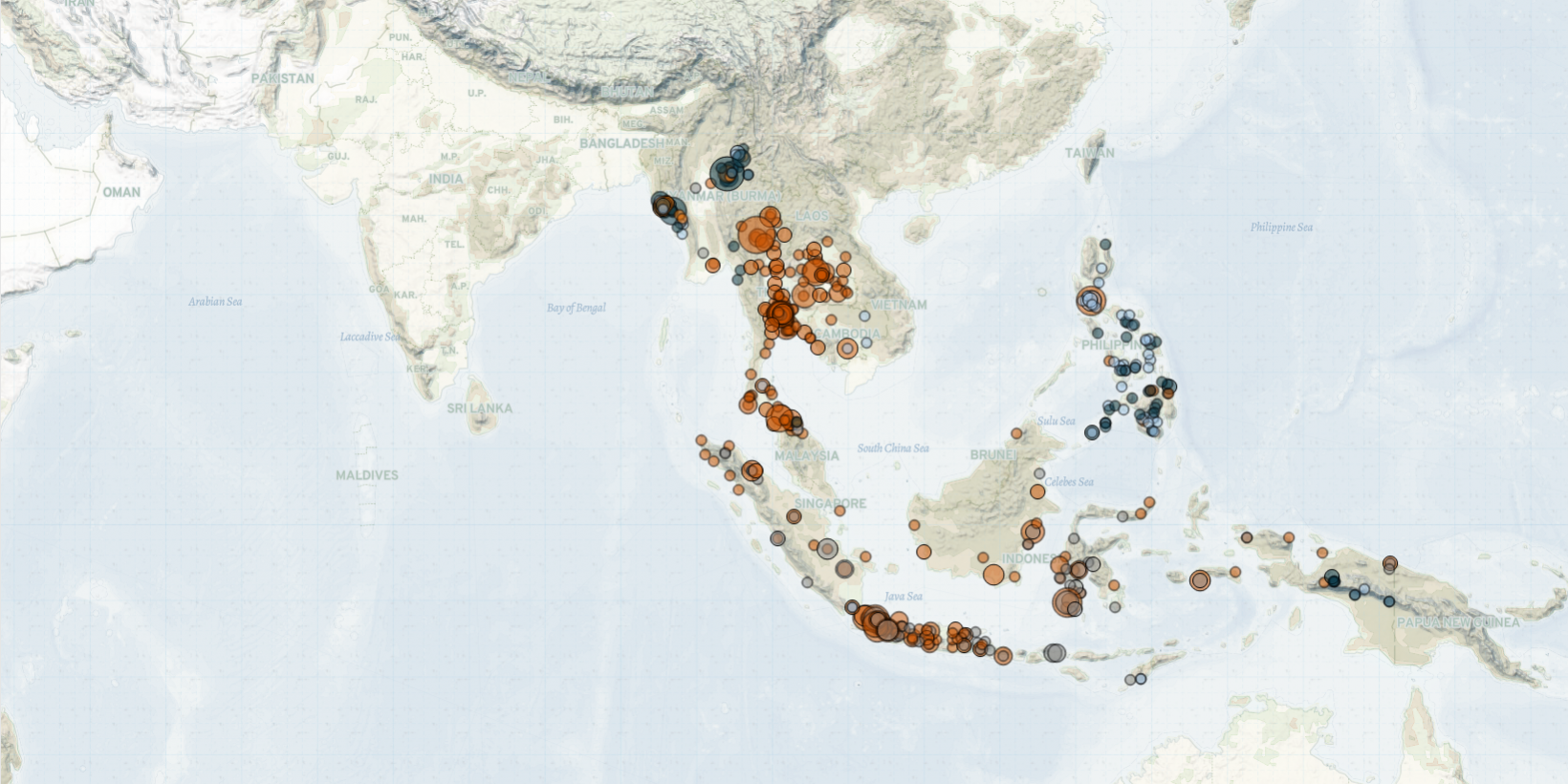 Last week in Southeast Asia, anti-government protests increased dramatically across Thailand following state repression of demonstrations the week prior. There was also a surge in pro-establishment demonstrations across the country. In Indonesia, the number of demonstrations against the controversial omnibus law on job creation continued on a downward trend. In Myanmar, fighting between state forces and ethnic armed organizations (EAOs) continued in Rakhine state, while decreasing in Shan state, as the country prepares for the 8 November general elections.

In Thailand, a record number of anti-government demonstrations were reported last week, following the violent crackdown on demonstrations the week prior. Alongside continued calls for Prime Minister Prayut Chan-o-cha’s resignation, a more democratic constitution, and reform of the monarchy, demonstrators also criticized the police for using water cannons laced with chemicals to disperse a peaceful anti-government rally held on 16 October. On 21 October, demonstrators stepped up their calls for the prime minister to step down. They presented a mock resignation letter to the government for the prime minister to sign and announced that he had three days to resign (Bangkok Post, 21 October 2020). After the prime minister did not heed their deadline, protesters vowed to continue taking to the streets. Prime Minister Prayut Chan-o-cha has urged that a resolution be sought through parliament, and also revoked the “severe” state of emergency that prohibited gatherings of more than five on 22 October (Bangkok Post, 23 October 2020). The state of emergency, originally set to be in place for a month, was imposed just a week before in a bid to quell the demonstrations. It appears to have had the opposite effect, though, as protests subsequently increased. The revocation of the emergency decree was yet another attempt by the prime minister to reconcile with the demonstrators.

Relatedly, in his first explicit comment on the ongoing protests, the king praised a royalist demonstrator in public for being “very brave” during a meet-and-greet session last week (BBC, 25 October 2020). Anti-government protesters consider this to be the king’s expression of opposition towards them and a significant moment in the current protest movement (Reuters, 24 October 2020). The palace has refrained from making any public comments about the ongoing protests since they broke out in July of this year.

In Indonesia, the number of demonstrations against the omnibus law on job creation continued to decrease last week. Demonstration events dropped by more than half compared to the week prior and largely remained peaceful. Last week’s protests coincided with the first anniversary of President Joko “Jokowi” Widodo’s second and final term in office. The controversial law, which has sparked huge waves of protests across the country in the past month, was introduced by the president during his inauguration speech a year ago on 20 October 2019. Alongside persistent calls to revoke the law, protesters also demanded that the president resign (Jakarta Post, 20 October 2020). While Jokowi has hailed this legislation as a key measure that would be able to redress the country’s economic problems, opponents of the law – comprising largely of student, labor, and environmental groups – consider it to be detrimental to workers rights and the environment. The decrease in demonstrations last week comes after a sustained crackdown by authorities on demonstrators. Thousands of demonstrators have been arrested since the law was passed on 8 October (The Straits Times, 10 October 2020), and police have also clashed repeatedly with demonstrators (Jakarta Post, 10 October 2020).

Finally, in Myanmar, there was a decrease in clashes between state forces and EAOs in Shan state. No clashes between the military and the Restoration Council of Shan State/Shan State Army-South (RCSS/SSA-S) were reported in Shan state last week. Both sides had been engaged in intense fighting throughout the first half of the month, but last week, the RCSS/SSA-S announced their desire to negotiate with the military to put an end to the fighting. The RCSS/SSA-S also instructed their fighters to refrain from clashing with military troops in order to allow the upcoming general elections to take place smoothly (Myanmar Times, 21 October 2020). Earlier, Myanmar’s election council cancelled polling in several townships in Shan state due to security concerns (Xinhua, 17 October 2020).

Meanwhile, the military and the United League of Arakan/Arakan Army (ULA/AA) continued to clash in Rakhine state last week. The ongoing unrest in the region prompted a student-led demonstration in Sittwe township. Dozens of students demonstrated against the state government and demanded that the army leave Rakhine state. Authorities have since arrested four student protesters on sedition charges (Irrawaddy, 21 October 2020). Recently, two other students, arrested on similar charges, were sentenced to jail for one year for voicing criticism of the military’s presence in Rakhine state (Myanmar Times, 12 October 2020).