A recent ceasefire agreement in Donbas has resulted in a significant decrease in fighting between Ukrainian government forces and Russian-led separatists and has raised hopes for the future of Ukrainian-Russian peace talks. On 22 July 2020, the Trilateral Contact Group on Ukraine (TCG) — a platform where representatives from Ukraine, Russia, and the Organization for Security and Co-operation in Europe (OSCE) discuss the resolution of the war in eastern Ukraine — reached a new agreement on measures to strengthen the ceasefire regime along the frontline in Donbas. The new agreement took effect on 27 July 2020. This is the eighth ceasefire agreement concluded since the beginning of 2018 and is thus far the most effective.

The war in Donbas began in 2014 when Russian forces occupied Crimea and entered eastern Ukraine with the aim of gaining territory and weakening the new pro-Western government in Kyiv. Intense fighting between Ukrainian and Russian-led forces ensued. Russian-led forces included units from the regular army of the Russian Federation, as well as pro-Russian armed formations of Ukrainian separatists in the Donetsk (DNR) and Luhansk (LNR) Peoples’ Republics. The frontlines of the conflict stabilized by the end of 2015, though grinding trench warfare has continued since then (Institute of the Study of War, 7 September 2017).

The July truce this year has led to a sharp reduction in fighting between Ukrainian and Russian-led forces. In the three months prior to the latest ceasefire agreement, ACLED records a total of 3,046 ceasefire violations, which include armed clashes and explosions/remote violence events. In the three months following the truce, the number of ceasefire violations dropped to 542 events, a decrease of 82%. However, unlike previous ceasefires which typically eroded within weeks, the current agreement has managed to keep levels of fighting low for almost four months (see graph below). Despite the decline, ceasefire violations are still recorded almost daily, leading to fatalities on both sides. 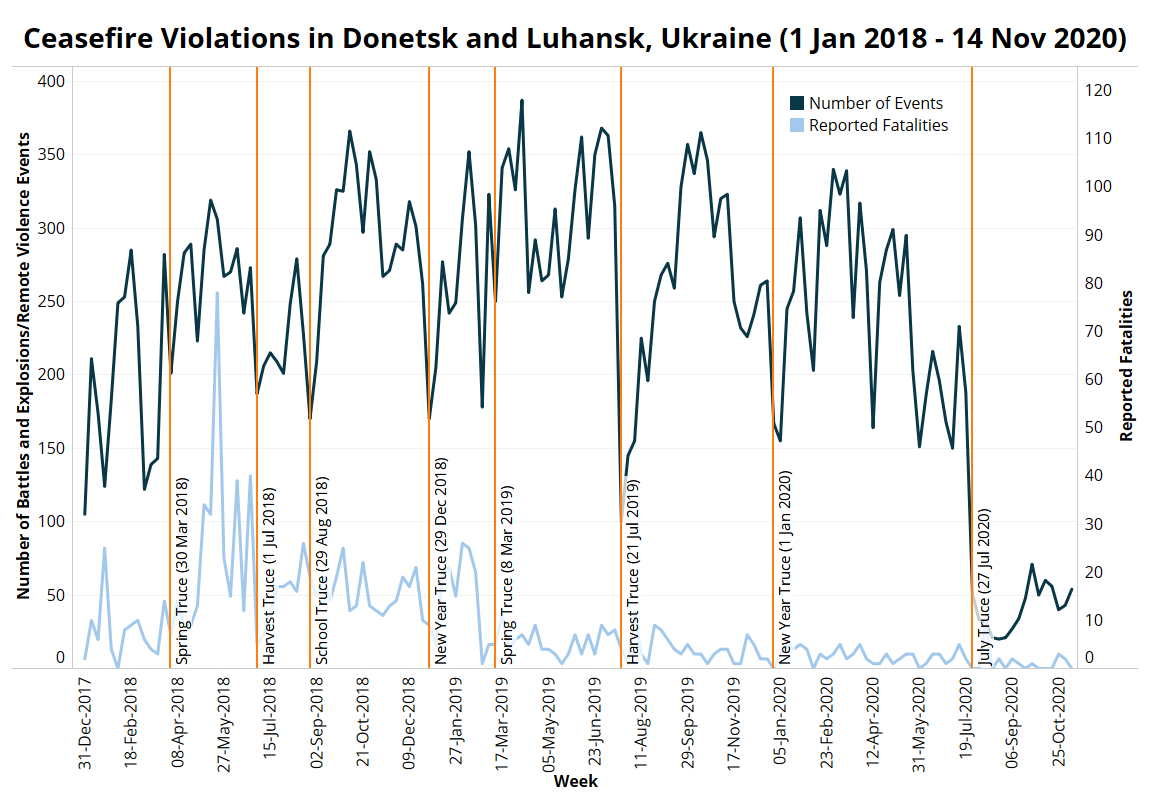 Both practical and political factors may have contributed to the success of the July truce. Previously, a new ceasefire agreement was reached every three months on average. The July truce took more than half a year to adopt, giving the TCG representatives more time to plan and implement new developments. During this time, the Ukrainian delegation to the TCG went through major changes. Almost all Ukrainian representatives were replaced with the intention of providing the delegation with both the power to reach decisions independently and the ability to contribute to the execution of those decisions (Ukrinform, 8 May 2020; Ukrinform, 6 May 2020).

The new agreement calls for the use of a coordination mechanism to respond to ceasefire violations which involves convening an extraordinary meeting of the TCG through the facilitation of the Joint Control and Coordination Center (JCCC). The JCCC is a group of representatives from Ukraine, Russia, and the Russian-led armed formations of the DNR and LNR tasked with observing compliance with the agreements reached by the TCG. Should this coordination mechanism fail to reduce fighting, the agreement allows for retaliatory fire following the issue of an order by the respective military command, a public statement regarding such orders, and notification to the TCG (OSCE SMM-Ukraine, 23 July 2020). This approach allowing frontline units to react to ceasefire violations may help decrease inadvertent escalations, though deliberate escalations are still possible should Russia or Ukraine calculate that such an escalation is advantageous.

The cooling of the conflict in Donbas does not resolve the political issues that drive it. Ukraine and Russia have agreed on a roadmap to settle the conflict which involves holding elections in Donbas. However, the two states have not reached a mutual understanding on how to achieve these objectives. Russia continues to maintain that elections controlled by their proxies are necessary before these proxies disarm. They have refused to move towards ending the war until this condition is met. Ukraine believes that if elections are held under these conditions, then Russian proxy units will influence the results and ultimately legitimize the puppet administrations in the DNR and LNR (Euromaidan Press, 21 September 2019).

Ukraine continues to maintain that elections will only be possible once the foreign mercenaries and military formations operating in Donbas have left the region. Ukraine hopes to first enter the occupied areas, disarm Russian-led formations operating there, and break the population out of the Russian information bubble in order to help safeguard their return to Ukraine’s political system. Many in separatist territories are denied access to Ukrainian and Western media resources and are presented with a distorted view of the political situation in Ukraine (Radio Free Europe, 8 August 2020). Ukraine also hopes to prosecute the leadership of the DNR and LNR. Ukraine has shown no sign of backing down on its demands. It refused to agree to include Donetsk and Luhansk in this year’s local elections held on 25 October despite Russian demands that they do so.

Meanwhile, international and domestic concerns may have decreased the Kremlin’s interest in its operations in Ukraine, potentially contributing to the success of the ceasefire. In Belarus, widespread anti-government demonstrations were held against the sometimes Kremlin-aligned regime of Alexander Lukashenko following fraudulent presidential elections in August 2020 (for more, see this recent ACLED infographic). This crisis threatens to replace Lukashenko’s regime with a popularly elected government, a development not in line with the Kremlin’s regional interests and which requires attention and resources to manage. Similarly, the Kremlin’s attention has been focused on its relationship with Turkey amid the recent six-week war between Azerbaijan and Armenia in Nagorno-Karabakh (Radio Free Europe, 9 November 2020; BBC, 10 November 2020). In Russia itself, demonstration activity increased in the summer following a controversial national referendum on the constitution which cemented President Vladimir Putin’s grip on power until at least 2036. The arrest of a popular regional governor and the poisoning of a prominent Russian opposition figure also contributed to an increase in demonstrations (for more, see this recent ACLED analysis). All of these developments may have weakened the Kremlin’s immediate interest in using its forces in Ukraine to pressure Kyiv.

The 27 July truce has been a breakthrough and is undoubtedly an important step towards ending the Donbas conflict. However, previous ceasefires have eroded quickly and without obvious reasons or warning indicators. This truce may ultimately prove no different, as fighting continues along the whole stretch of the frontline (see map below). The war in Donbas remains the Kremlin’s primary lever of influence over Kyiv. Going forward, the Kremlin may look for ways to flex its muscles in Eastern Europe as a sign of strength amid domestic demonstrations and to signal its geopolitical power to the West as a new administration takes over in the United States. This could potentially lead to an increase in hostilities in Donbas in the coming months. 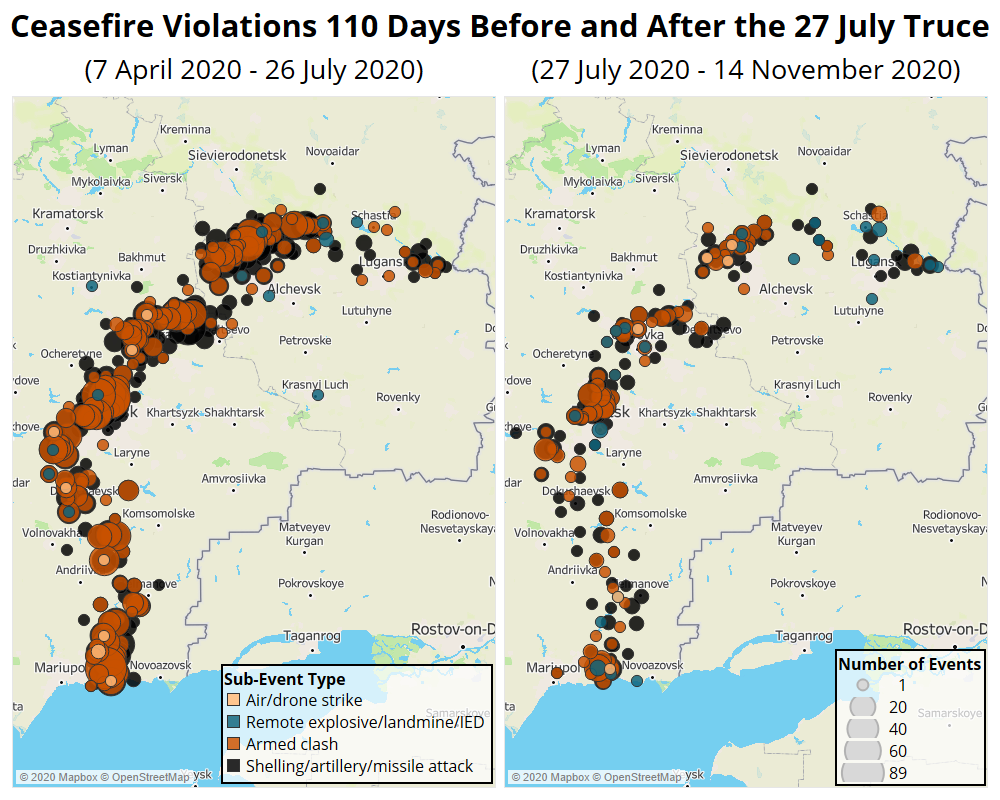