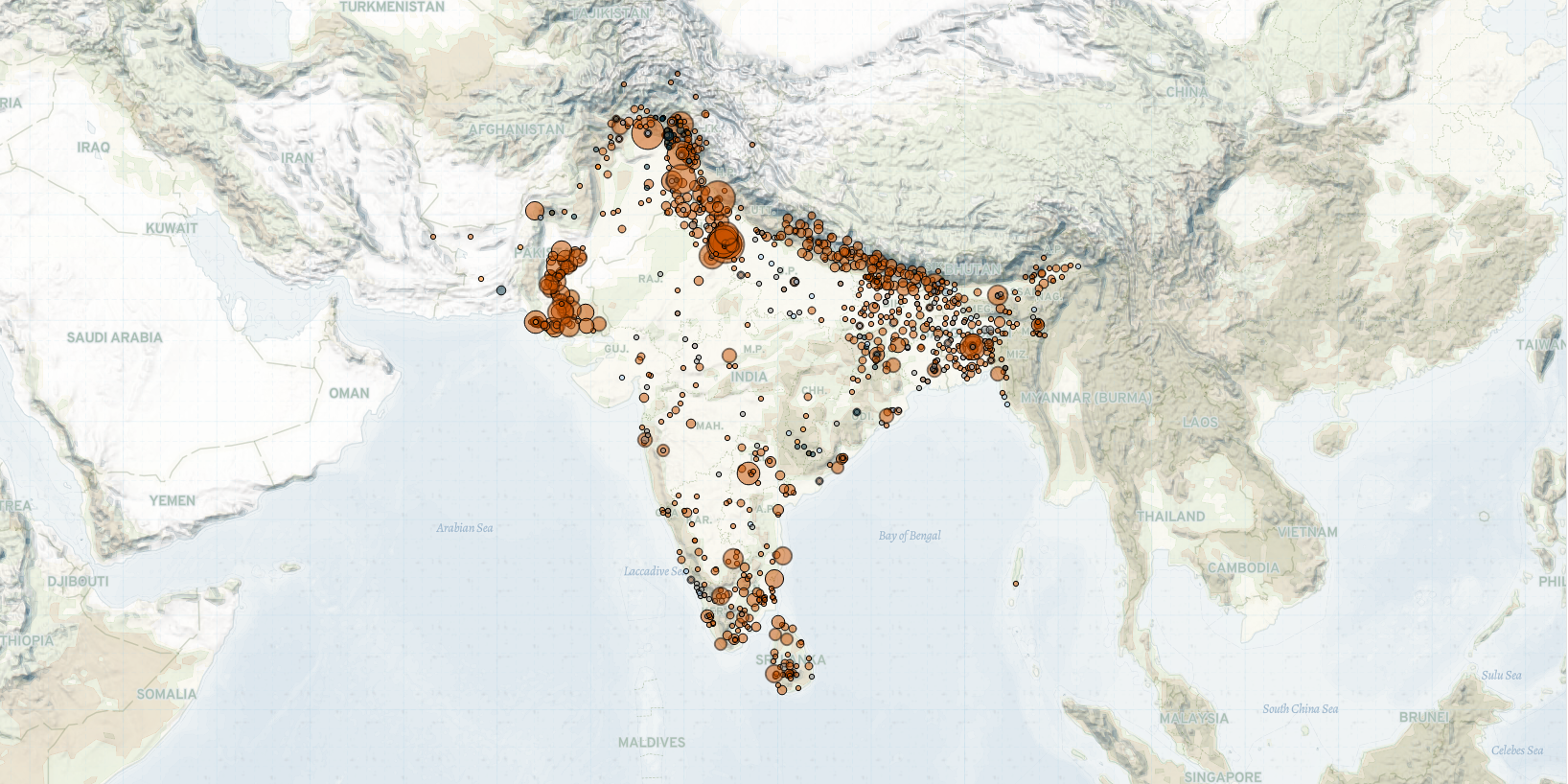 Over the past month in South Asia, Baloch separatists launched deadly attacks on security forces in Balochistan province of Pakistan. As well, the Islamic State (IS) targeted Shiite Muslims, killing 11 civilians in the province. Incidents of cross-border violence between India and Pakistan decreased, although Pakistan accuses Indian security forces of attacking a United Nations (UN) vehicle. Meanwhile, militant groups in India attacked security forces and civilians as local elections in Jammu and Kashmir (J&K) state were concluded. Maoist violence increased in India as two Maoist commanders were killed in encounters with police. Lastly, demonstration activity increased in Nepal and Sri Lanka. Political parties opposed the decision of the president of Nepal to dissolve parliament as an unconstitutional move. Muslim activists demonstrated against the forced cremation of coronavirus victims in Sri Lanka, which has been mandated by the government since the beginning of the pandemic.

In Balochistan province of Pakistan, clashes between security forces and separatist militants were particularly deadly over the past four weeks. In Awaran district, security forces killed ten militants, presumed to be Baloch separatists, in their hideout during an intelligence-based operation. Five days after the encounter, an unidentified group opened fire at a Frontier Corps checkpost from nearby hilltops in Harnai district, killing seven Pakistani soldiers. Another soldier was killed during a search and clearance operation in the same district. Separatists occasionally launch attacks on security forces as well as civilians working on the China-Pakistan Economic Corridor (CPEC) projects, opposing Chinese influence in the province (Yahoo News, 27 December 2020). In October 2020, seven Frontier Corps soldiers and seven other guards employed by the Oil and Gas Development Company Limited (OGDCL) were killed in an attack in Gwadar district.

Additionally, in Balochistan, IS militants kidnapped and killed 11 coal miners from the minority Hazara Shiite community in Mach area, close to the border with Afghanistan on 2 January. Hazaras have been persecuted for their faith and periodically targeted by Sunni Muslim militant groups, including the IS and the Taliban (Hindustan Times, 3 January 2021). The latest significant incident was in April 2019, when a suicide bomb in Quetta city killed 24 people, predominantly from the Hazara community. The recent attack led to multiple demonstrations in Balochistan and Sindh provinces condemning the violence. Clashes between demonstrators and commuters were reported in Karachi city during a sit-in demonstration that disrupted traffic.

Cross-border violence between Indian and Pakistani forces decreased over the past few weeks yet remains a routine occurrence, with five Pakistani soldiers and one Indian soldier killed during an exchange of fire between 15 December and 1 January. The Pakistani military reported that Indian forces hit a UN vehicle near the Line of Control (LoC) carrying two military observers on their way to talk to victims of ceasefire violations in Pakistan-controlled Kashmir (Xinhua, 18 December 2020). The UN later confirmed that the vehicle was damaged by an “unidentified object,” whereas India denied involvement in the attack (Dawn, 19 December 2020; The Hindu, 19 December 2020).

In India, various militant groups launched attacks on security forces and civilians in J&K during and shortly after the first District Development Council (DDC) elections since J&K’s special status was revoked. In Srinagar city, suspected Lashkar-e-Taiba (LeT) militants shot dead a personal security guard of a Peoples Democratic Party leader, who was also a former Hizb-ul-Mujahideen member. Later, two local LeT members involved in the attack surrendered to security forces during an exchange of fire. Four militants of the Islamist group Al-Badr and a soldier were killed in an encounter after the militants allegedly tried to infiltrate into India from Pakistan. Local police accused Pakistan of continuously sending militants to disturb the elections (Economic Times, 14 December). Further, unidentified militants lobbed grenades targeting police camps and bunkers, as well as a Hindu temple, killing three Central Reserve Police Force personnel. In the past few months, there has been an increase in grenade attacks on security forces.

The DDC elections took place from 28 November to 19 December amid a heavy security presence around polling stations and sporadic mob violence. Politicians are frequent targets of armed violence; at least nine Bharatiya Janata Party (BJP) members were killed during targeted attacks in J&K last year. Mob violence was reported in Poonch district with at least 10 people injured, including two candidates and two police officers, in clashes between supporters of rival candidates across several locations during the final phase of the elections on 19 December. The People’s Alliance for Gupkar Declaration (PAGD) emerged as the winner in J&K with 110 seats, followed by the BJP with 75 seats, and independent candidates, who won 50 seats (Indian Express, 23 December 2020). The victory of PAGD, which is pro-India yet favors self-governance in Kashmir, has revealed voters’ rejection of the decision to abrogate article 370 and the special status of J&K (Deutsche Welle, 23 December 2020).

Elsewhere in India, Maoists, including splinter groups Peoples’ Liberation Front of India and Tritiya Sammelan Prastuti Committee, increased their militant activities in remote areas of the Red Corridor. Clashes with security forces led to the death of nine rebels, including two area rebel commanders in Jharkhand state, as well as one police officer. Security forces defused 22 IEDs planted in a jungle in Jharkhand during a search operation. The jungle track was used by security forces and villagers (Hindustan Times, 28 December 2020). Maoist rebels attacked construction and mining workers, demanding extortion money and opposing roadworks that would facilitate the movement of security forces. At the same time, road construction in Maoist-affected remote areas in states like Telangana and Chhattisgarh is not progressing as quickly as planned (The Pioneer, 7 January 2021). This slows down the development of these regions, as well as the ability of police forces to manage the Maoist insurgency.

In Nepal, the president dissolved parliament on 20 December at the request of Prime Minister KP Sharma Oli’s cabinet and announced that general elections would take place in April and May, at least a year ahead of schedule (Al Jazeera, 20 December 2020). According to the prime minister, internal conflicts within the ruling Nepal Communist Party stalled decision-making in parliament as the party split into two factions. Oli’s critics have accused him of corruption, mishandling the coronavirus pandemic, and shifting support to China and away from Nepal’s traditional ally India (Deutsche Welle, 29 December 2020). Thousands of political party members and citizens staged daily demonstrations, denouncing the dissolution of parliament as unconstitutional. Demonstration activity increased by more than three times during the past four weeks. Meanwhile, the Supreme Court is hearing dozens of petitions filed against the prime minister, arguing he lacks the authority to dissolve parliament under the constitution (CNN, 31 December 2020).

Demonstration activity also increased in Sri Lanka where Muslim activists and civil society organizations oppose the cremation of Muslims who died of the coronavirus. According to demonstration leaders, Muslims are forcefully cremated and buried secretly against their religious belief (Hindustan Times, 23 December 2020). Despite the World Health Organization’s guidelines that permit burials, Sri Lanka is the only country that enforces cremation for people who die or are suspected to have died from the coronavirus, citing fear of infection spread during burials (Al Jazeera, 18 December 2020). Muslims have faced widespread resentment in Sri Lanka, especially after the Easter bombings in 2019, when an Islamist group killed 257 people (Al Arabiya, 15 December 2020). The Muslim minority accused the government of violating their basic human rights by forbidding burials according to their traditions. The government responded by suggesting that coronavirus victims could be flown to the Maldives for burial (Al Arabiya, 15 December 2020).