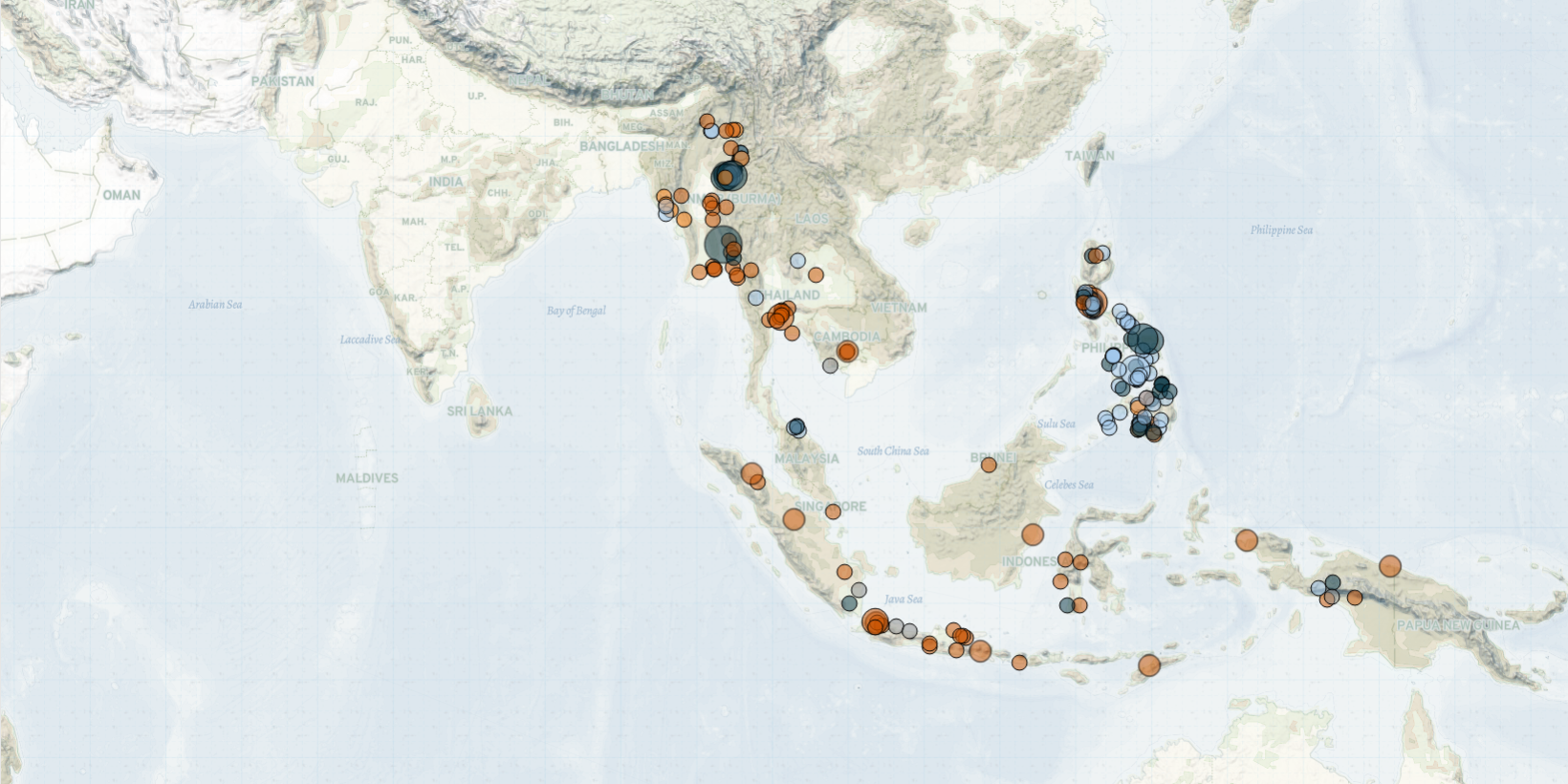 Last week in Southeast Asia, clashes between ethnic armed organizations (EAOs) decreased in Shan state, Myanmar. However, fighting between Myanmar state forces and Karen rebels increased in the Bago region. Likewise, in Indonesia and the Philippines, state forces clashed with separatist and communist rebel groups, respectively. Also in the Philippines, violence against civilians – including drug suspects and former and current government officials – increased significantly. Several of the fatalities had been those included on the president’s “narco list” of personalities allegedly linked to the drug trade at some point. Lastly, protests over various issues were reported across the region. In Myanmar, the military-backed opposition party led protests demanding an investigation into alleged electoral fraud. In Indonesia, Papuans called for a referendum to grant them independence. Lastly, while protests remain muted in Thailand, minor protests against an anti-government activist’s arrest were recorded.

In Myanmar, clashes between the Palaung State Liberation Front/Ta’ang National Liberation Army (PSLF/TNLA) and Restoration Council of Shan State/Shan State Army-South (RCSS/SSA-S) in northern Shan state decreased significantly last week following intense fighting the previous two weeks. With no reports of talks between the two groups, and with soldiers from both sides stationed in close proximity to each other (BNI, 15 January 2021), the lull appears to be rather fragile. In light of this, villagers have continued to flee, fearing further clashes (BNI, 15 January 2021). To date, more than 3,700 villagers have fled their homes as a result of the fighting that broke out in December (BNI, 12 January 2021).

Elsewhere in Myanmar, clashes between the Myanmar military and the Karen National Union/Karen National Liberation Army (KNU/KNLA) increased in the Bago region amid simmering tensions over a territorial dispute. The fighting was concentrated in Kyaukkyi township. The increase in clashes comes as the KNU/KNLA issued a statement claiming that the Myanmar military has established eight new bases in neighboring Hpapun township, Kayin state since the signing of the 2015 Nationwide Ceasefire Agreement (NCA) (7Day News, 15 January 2021). Kyaukkyi and Hpapun townships are both partly controlled by the Karen rebels. A road construction project by the military to connect the two townships has further fueled tensions in the region since early 2018 (Network Media Group, 19 January 2021; Irrawaddy, 20 February 2020). Meanwhile, the government has expressed its willingness to meet with the KNU/KNLA to de-escalate tensions between the two sides (Eleven Media Group, 10 January 2021).

Clashes between rebel groups and state forces were also reported in Indonesia and the Philippines. In Indonesia, state forces fought with the separatist West Papua National Liberation Army (TPNPB) in Papua province, resulting in the death of an Indonesia military soldier. Reports also surfaced that the TPNPB had burned down two communication towers belonging to the state-owned company Telkomsel on 7 January (Surya, 13 January 2021), just a day after firing at civilian aircraft which the rebels claimed were used by state forces (Benar News, 7 January 2021). The damage has disrupted 4G internet services across Intan Jaya, Puncak, and Puncak Jaya regencies (Surya, 13 January 2021). In the Philippines, police forces exchanged gunfire with the communist New People’s Army (NPA) for three consecutive days – from 10 to 12 January – in Samar province as part of a police operation targeting communist rebels in the area. One NPA member was killed during the clashes.

Also in the Philippines, there was a significant spike in violence against civilians, with at least 25 civilians killed over the span of last week. Almost half of the fatalities had alleged drug links, including at least four who had been included on President Rodrigo Duterte’s so-called “narco list” at some point. The narco list includes names of prominent personalities allegedly connected to the drug trade. Given the high number of killings of people who have been named on the list, being included on the list has been equated to being handed a death sentence (Bulatlat, 9 December 2020). Last month, following the killing of yet another mayor who had been on the narco list, the president attempted to distance himself from the list during a 7 December public address (The Straits Times, 8 December 2020). In response to the high number of civilian killings last week – many of which took place in broad daylight and with former and current government officials included in the victims – the Commission on Human Rights (CHR) announced that it will launch independent investigations into the incidents (CNN, 16 January 2021).

Meanwhile, protests were recorded in Myanmar, Indonesia, and Thailand. In Myanmar, the military-backed opposition Union Solidarity and Development Party (USDP) continued to hold protests demanding an investigation into alleged electoral fraud during the 8 November 2020 elections. Amidst the ongoing demonstrations, the Myanmar military claims that they have discovered over 5.4 million voter list mistakes in areas where army personnel and their family members voted (Myanmar Times, 14 January 2021). In Indonesia, students and indigenous people in Papua and West Papua provinces protested against the extension of West Papua’s Special Autonomy Status and demanded a referendum to be held on independence. The protests come as the Indonesian parliament announced that the bill on the Special Autonomy Status is one of four matters that would be prioritized for discussion in 2021 (Tirto, 11 January 2021). Indonesian authorities have expressed their intention to renew the region’s special autonomy status, which would keep West Papua under Indonesia’s jurisdiction (Tempo, 1 October 2020).

Finally, in Thailand, protests remain muted as the country deals with a spike in coronavirus infections. Meanwhile, police have continued to carry out arrests on lèse-majesté charges. The nighttime arrest of an anti-government student protest leader on 13 January sparked further dissatisfaction over the authorities’ renewed use of the royal defamation law. Notwithstanding this, protest leaders insist that they will not call for new demonstrations for the time being in order to help contain the second wave of coronavirus infections in the country (Thai Enquirer, 18 January 2021). ACLED records only two minor protests in Thailand against last week’s arrest.