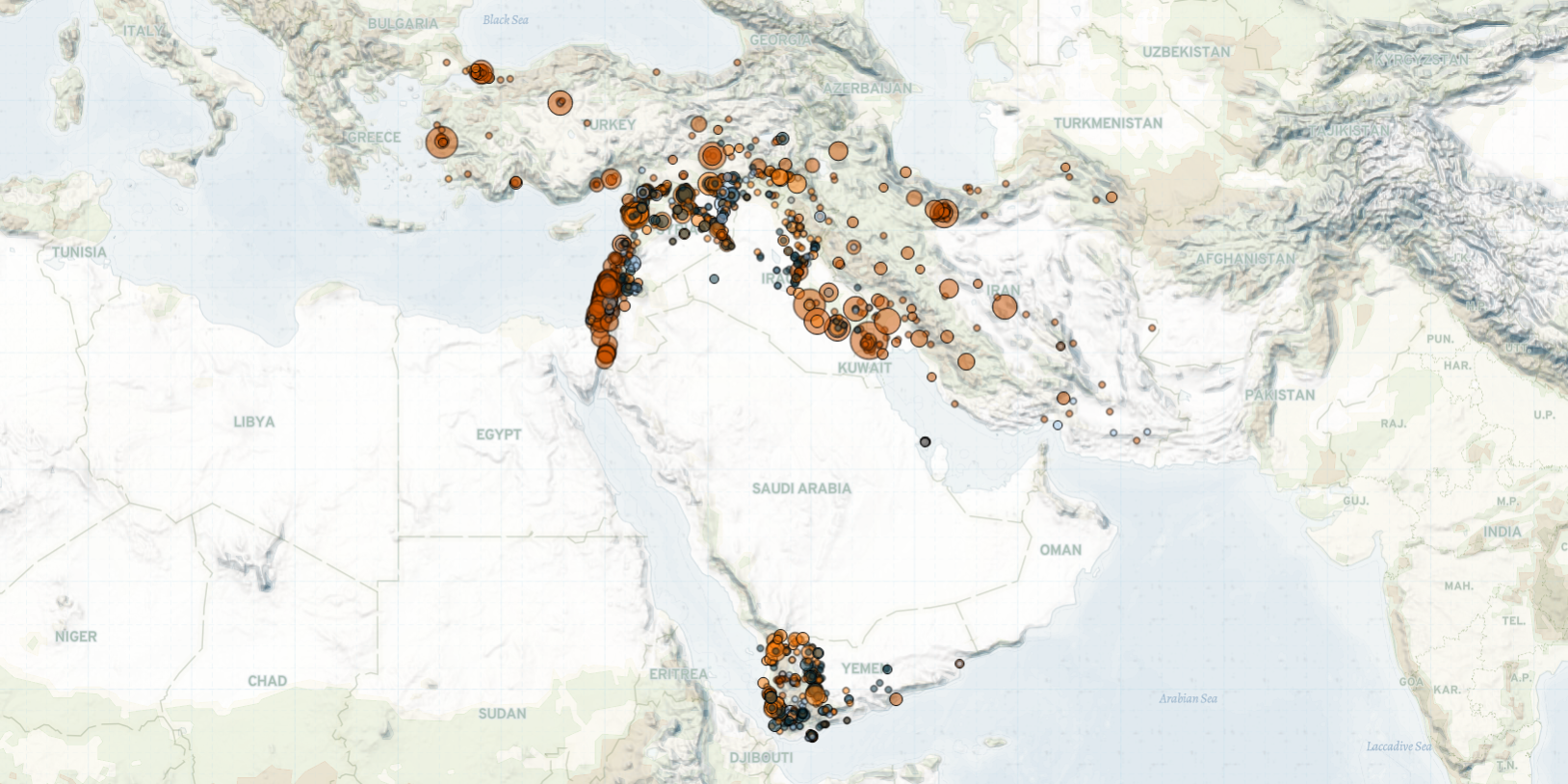 Last week in the Middle East, fighting between pro-Hadi and pro-Houthi forces continued in Marib, Hodeidah, and Ad Dali governorates in Yemen. Meanwhile, the United States (US) announced the designation of the Houthis as a terrorist organization, leading to demonstrations in Houthi controlled areas. Elsewhere, Israel intensified its airstrikes against Iranian and Iranian-back forces in Syria, while Russian warplanes continued to target Islamic State (IS) positions. In Turkey, demonstrations continued over the appointment of a university rector with close ties to the ruling party. Finally, retired workers in Iran staged several demonstrations to demand higher pension benefits.

On 10 January, the US announced that it would designate the Houthis as a terrorist organization beginning on 19 January (US Department of State, 10 January 2021). While protests have previously occurred in the territory controlled by the Hadi-led government, calling for labelling the Houthis a terrorist organization, the US State Department’s decision prompted demonstrations in Houthi-controlled areas against such a  designation (Ansar Allah, 15 January 2021). Humanitarian aid agencies have warned that the designation will exacerbate the country’s humanitarian and economic crises by restricting aid flows (The Guardian, 11 January 2021).

Meanwhile, in Saudi Arabia, Saudi military forces intercepted three explosive-laden drones that were allegedly launched by Houthi forces in Hodeidah targeting Saudi Arabia (Arab News, 15 January 2021). Such attacks are a regular occurrence and rarely cause fatalities. However, in the past, Houthi forces have managed to damage economic assets in Saudi Arabia, including oil infrastructure, using such drones.

In Syria, Israel ramped up its targeted airstrikes against Iran, and the various groups and militias that Iran backs, with the deadliest attacks in years. Israeli warplanes carried out a series of airstrikes on 13 January that targeted the positions of the regime forces, Iranian Islamic Revolutionary Guard Corps (IRGC), the Lebanese Hezbollah, and Afghan Fatemiyoun Brigade in Deir-ez-Zor province. The strikes on Deir-ez-Zor city and its outskirts, as well as in Al Mayadin and Al Bukamal deserts, resulted in the killing of at least 57 members of the aforementioned groups (The Guardian, 13 January 2021). The IRGC’s Quds Force, on the other hand, denied that the attacks caused any casualties (Al-Monitor, 14 January 2021). Elsewhere, Syrian Democratic Forces (QSD) continued their conscription campaign against civilians in their areas of control in eastern Syria. The majority of those conscripted in the past week have been teachers. In northwest Syria, opposition and Islamist factions repelled an attack by regime forces on Fleifel front in Idleb amid an exchange of shelling barrages between both sides along existing frontlines. In the Syrian desert, Russian warplanes carried out airstrikes on IS positions amid continued attacks by the latter against regime and pro-regime militia forces.

In other developments, a mass grave was discovered in Nahiyat Al Sharqi sub-district of Salah Al Din province in Iraq, where tens of bodies are said to have been buried. Media reports have claimed that the victims in the mass grave could be local Sunnis who were among hundreds of others abducted by Shiite militias in 2015 during the fight against IS. Kataib Hezbollah and Asaib Ahl Al Haq of the Popular Mobilization Forces control the area and are preventing the exhumation of the grave (Basnews, 14 January, 2021). Elsewhere, unidentified militants detonated an IED targeting a liquor store in central Tikrit city. No casualties were reported. While the targeting of liquor stores in central Iraq is not uncommon, this marks the first successful attack where IEDs were used (Basnews, January 15, 2021).

In Turkey, students and lecturers at Bogazici University in Istanbul entered a second week of demonstrations over President Recep Tayyip Erdogan’s appointment of a figure with close ties to his ruling party as the new rector. Over two dozen other demonstrations were held in the past two weeks in solidarity with those protesting at Bogazici, viewing the appointment as a move to curb academic freedoms. Traditionally, elections have determined the directors of universities in Turkey, but Erdogan has reserved the right to directly appoint university rectors since the failed 2016 coup (The Guardian, 6 January 2021). He has appointed 27 university rectors since then (Arab News, 9 January 2021), while more than 8,500 academics have been dismissed (Politico, 15 January 2020).

Finally, for the second consecutive week, retired workers held nationwide peaceful protests over their livelihood conditions in at least 25 towns and cities across Iran. Demanding a 50% increase in pensions, protesters called on the government to make payments owed to the Social Welfare Fund to allow for the increase in benefits (Iran International, 3 January 2021). Millions of Iranians have been hit hard by the economic fallout of US sanctions, decreasing oil prices, and longstanding government mismanagement of the economy. The economic shock of the coronavirus pandemic has exacerbated Iran’s problems, pushing more households into poverty. According to the World Bank, Iran’s GDP has contracted by 6.8% in the last year, and its year-over-year consumer price inflation reached 46% in November 2020 (World Bank, 3 December 2020).