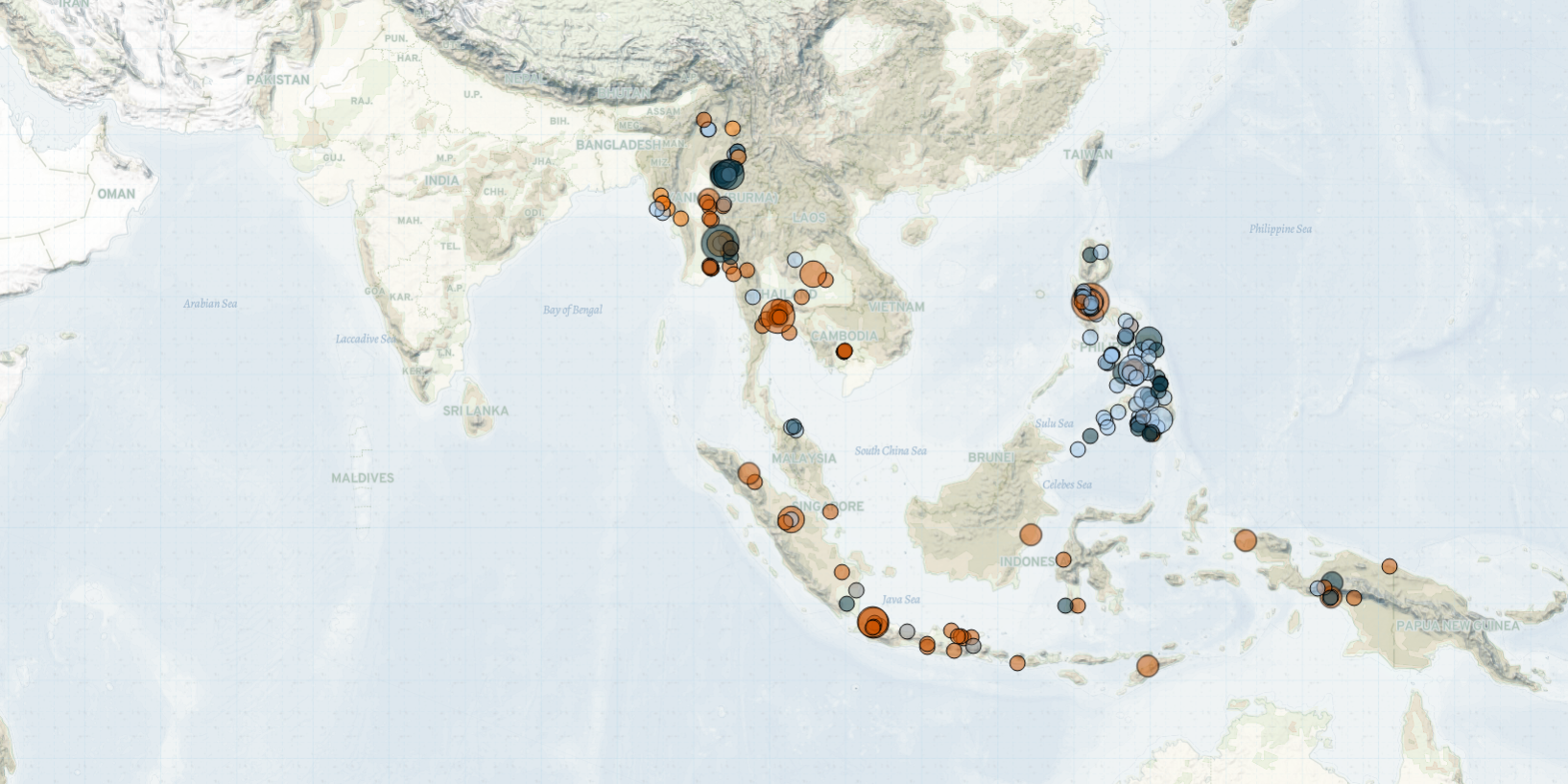 Last week in Southeast Asia, there was a slight increase in fighting between warring ethnic armed organizations (EAOs) in Shan state, Myanmar. Meanwhile, tensions between the Myanmar military and Karen insurgents in the Bago region resulted in civilian casualties and forced villagers to flee their homes. Clashes between rebel groups and state forces were also recorded in Indonesia and the Philippines. In Indonesia, fighting between Papuan separatists and state forces resulted in two fatalities. In the Philippines, clashes between communist rebels and state forces increased amid deteriorating relations between the two sides. Relatedly, the Philippine government’s move to unilaterally abrogate an accord that prevented state forces from visiting University of the Philippines’ campuses unannounced sparked protests by students. The government claims that the accord was abrogated in order to curb campus recruitment by communist rebels, but critics view the move as a crackdown on academic freedom. Meanwhile, anti-government protesters in Thailand took to the streets in response to the ongoing police crackdown on protest leaders. Lastly, in Myanmar, protests by military-backed groups continue to center around calls for an investigation into alleged electoral fraud.

In northern Shan state, Myanmar, there was an uptick in fighting between the Palaung State Liberation Front/Ta’ang National Liberation Army (PSLF/TNLA) and the Restoration Council of Shan State/Shan State Army-South (RCSS/SSA-S) following a lull the week prior. Nonetheless, the number of clashes between the two groups were muted compared to several weeks ago. A clash between the PSLF/TNLA and the Myanmar military was also reported last week. The Ta’ang rebels have accused the Shan rebels of collaborating with the military to expand their territory northwards, although the Shan group denies this (Frontier Myanmar, 26 January 2021). Additionally, there was an increase in violence against civilians in the state, with villagers abducted by the RCSS/SSA-S on suspicion of having provided information to the PSLF/TNLA. These developments come as the PSLF/TNLA expressed a willingness to engage in talks with the RCSS/SSA-S and the military (Shan Herald Agency for News, 19 January 2021). Meanwhile, the RCSS/SSA-S also expressed readiness to meet with the PSLF/TNLA. However, neither side has made any official offers to hold talks (Shan Herald Agency for News, 21 January 2021).

Meanwhile, in Kyaukkyi township, Bago region, heightened military tensions between state forces and the Karen National Union/Karen National Liberation Army (KNU/KNLA) forced villagers to flee their homes. The shelling of villages caught in the crossfire between the two groups were reported across three consecutive days. Meanwhile, the Myanmar military and the KNU/KNLA have been trading blame over the killings of two civilians in Kyaukkyi township last week (Karen Information Center News, 20 January 2021). Tensions between the two groups, which were reignited in December, have forced around 1,000 villagers to seek shelter in the forests (Myanmar Now, 21 January 2021). The remoteness of the forests, compounded by the instability in the region, has made it difficult for humanitarian groups to deliver aid to the displaced villagers (Radio Free Asia, 22 January 2021).

Fighting between rebel groups and state forces were also reported in Indonesia and the Philippines. In Papua province, Indonesia, the separatist West Papua National Liberation Army (TPNPB) clashed with state forces in Intan Jaya regency for the second week in a row. Two soldiers were killed during last week’s clash, bringing the total number of soldiers killed in Intan Jaya regency over the past two weeks to three. In the Philippines, clashes between the communist New People’s Army (NPA) and state forces increased following the killing of three unarmed military soldiers by the NPA in Bicol region on 17 January. ACLED records five clashes between the two sides on 20 January alone. Earlier in the week, clashes between the Philippines military and the NPA erupted in Guihulngan, Negros Oriental as state forces pursued the rebels with air support. The fighting in Guihulngan has displaced about 20 families (Manila Times, 19 January 2021).

Meanwhile, demonstration activity also increased in Thailand and Myanmar. In Thailand, there was a small resurgence of anti-government demonstrations in response to the intensified police crackdown on anti-government protesters in the past few weeks. Since December, a total of 55 protesters have been charged under the royal defamation law – more commonly referred to as the lèse majesté law (Prachatai, 22 January 2021). Relatedly, on 19 January, Thai courts handed a 43-year prison sentence to a woman who had shared social media posts criticizing the monarchy (CNN, 20 January 2021). This is the harshest sentence of its kind thus far. Meanwhile, the government also announced that they would file a lèse majesté complaint against the leader of the dissolved opposition Future Forward Party, Thanathorn Juangroongruangkit, for criticizing the government’s COVID-19 vaccination plan as lacking transparency and favoring a company controlled by the king (The Guardian, 21 January 2021).The authorities’ recently renewed and liberal use of the lèse majesté law is widely viewed as a last-ditch attempt to suppress dissent in the country. However, such a move directly goes against protesters’ demands and further fuels their resentment towards the establishment (Nikkei Asia, 13 January 2021).

Finally, in Myanmar, supporters of the military-backed opposition Union Solidarity and Development Party (USDP) continued to call for an investigation into alleged electoral fraud. These protests by the USDP have been ongoing since the 8 November general elections results were announced. More recently, the military has been taking increasingly assertive measures to challenge the election results. Last week, it issued a statement demanding an explanation from the government and parliament over “vote-rigging” during the elections (Myanmar Times, 22 January 2021). This comes after the parliament rejected military-backed calls to convene a special parliamentary session for a probe into alleged electoral fraud the previous week (Irrawaddy, 15 January 2021).