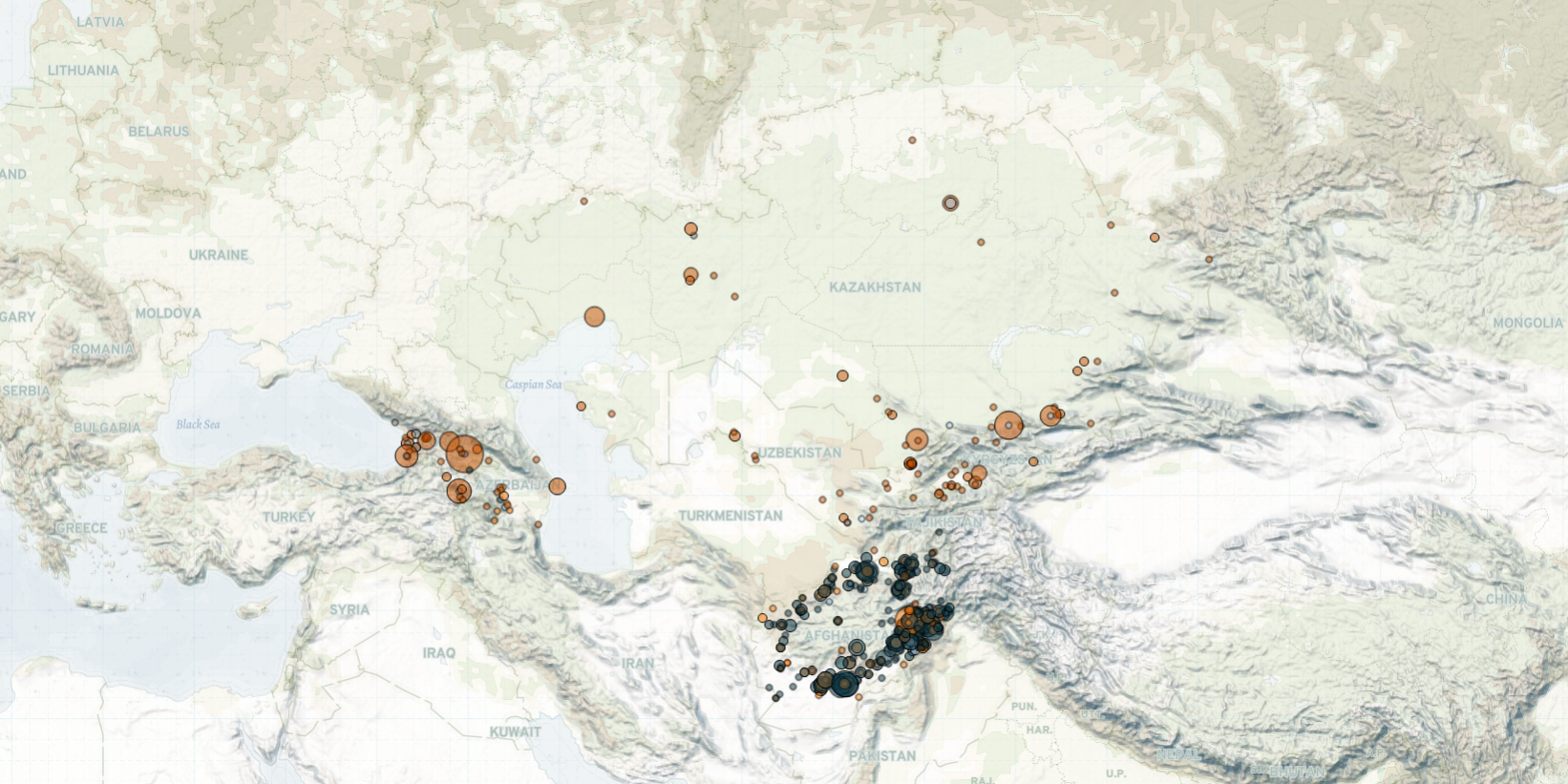 Last week, violence in Afghanistan continued between the Taliban and government forces. The Taliban was also targeted by the Islamic State (IS), while Afghan forces clashed with another militia led by an anti-Taliban insurgent. In the de facto Republic of Artsakh, remnant landmines inflicted casualties on civilians and military forces for another week. Protests took place in Armenia against recent changes in the judicial system. In Georgia, demonstrations took place calling for the opening of the Armenian border, which has been closed due to the coronavirus pandemic, restricting economic migration. In Kazakhstan, oil and gas workers continue to protest for better working conditions. In Kyrgyzstan, a new round of opposition protests followed the appointment of the new parliament.

In Afghanistan,1ACLED is currently conducting a review of sourcing and reporting of the conflict in Afghanistan since 2020. Afghan forces operations and airstrikes inflicted many fatalities on the Taliban last week in a number of provinces, mainly in Kandahar. Meanwhile, the Taliban attacked a military base in Khan Abad district of Kunduz, killing members of the National Security and Defense and National Civil Order Forces. The group also conducted a suicide attack using a car bomb, inflicting tens of casualties at the Public Order Police base in Nangarhar province. Such attacks have been rare since December 2020. In a separate development, IS claimed responsibility for a roadside bomb that killed four Taliban militants in the Chawkay district of Kunar province and another that killed one policeman in Jalalabad city of Nangarhar province.

Apart from these clashes, the Alipour militia reportedly seized control over Hisa i Awali Bihsud district in Wardak province following several days of clashes with Afghan forces. Alipour is a militia commander who was arrested in 2018 due to severe abuses, mostly against Pashtun minorities (Al Jazeera, 27 November 2018). He was released shortly after as his supporters staged a series of violent demonstrations and formed an insurgency. Since then, the Alipour Militia has surfaced from time to time — most recently on 29 January 2021 — clashing with Afghan forces in Wardak province after Afghan forces reportedly killed some civilians during a protest on the same day (TOLO News, 3 February 2021).

Targeted killings of civilians also continued in the country last week. Many such killings remain unclaimed, similar to past weeks. Last week’s attacks mainly took place in Kabul and Jalalabad cities, where government officials, judges, and religious scholars were killed and injured.

On the other hand, a bipartisan panel tasked by the United States (US) congress to examine the US-Taliban deal recommended that the Biden administration slow down the withdrawal of US forces from Afghanistan past the May 2021 deadline (New York Times, 3 February 2021). The Taliban attacked the panel’s report and warned that extending the stay of NATO forces “will lead to a major war” (Voice of Jihad, 5 February 2021). Last week, Taliban negotiators also made a series of diplomatic trips to Iran, Russia, and Turkmenistan, with a planned visit to Turkey to come. The government threatened to recall its negotiation team from Qatar if the group does not rejoin the talks soon (AP, 3 February 2021; AP, 31 January 2021).

Along the Armenia-Artsakh-Azerbaijan border, the situation remains relatively stable; however, Azerbaijan did accuse Armenian military forces of firing towards Azerbaijani positions in the direction of the Qazakh region. The Armenian Defense Ministry denies these accusations. At the same time, the number of victims of landmine explosions continues to rise, with a civilian and a soldier’s death reported last week. In addition, Russia and Turkey officially opened a joint ceasefire monitoring center that will serve as a base for surveillance drones to monitor the new ceasefire lines between Armenian and Azerbaijani forces (Eurasianet, 2 February 2021).

In Armenia, opposition Homeland Salvation Movement members staged a protest against the proposed amendments to the Armenian Judicial Code and the formation of an anti-corruption court. According to the demonstrators, the new courts might become a political tool to suppress the opposition (Sputnik Armenia, 3 February 2021). Meanwhile, the ruling My Step alliance, led by Prime Minister Nikol Pashinyan re-evaluated the idea to organize snap parliamentary elections in 2021, stating that there was no such demand among the general public (OC Media, 8 February 2021). This signals that opposition protests are likely to continue in Armenia since Pashinyan’s government remains in power.

In Georgia, locals staged protests in the Akhalkalaki region, demanding the borders with Armenia and Russia be reopened. For most of the local population, the primary source of income has been seasonal work abroad. These borders were closed in March 2020 due to the coronavirus pandemic (Jnews, 3 February 2021).

In Kyrgyzstan, the parliament approved a new government, bringing the long-running political crisis — which started after the parliamentary elections in October 2020 — in the country to a close. However, the new prime minister’s appointment was protested in Bishkek and Batken cities right after the news. Protesters claim that the new prime minister is not capable of overcoming the country’s economic hardship. The current government will operate until the snap Parliamentary elections take place in June 2021 (Eurasianet, 3 February 2021).

Oil and gas workers continued to protest in Kazakhstan by organizing five protests over the last week in Aqtobe, Mangghystau, and Shymkent regions, demanding improved working conditions for a second week in a row. Meanwhile, in Taldykorgan and Nur-Sultan, people organized protests against the government’s coronavirus vaccine policy. This comes amid a certain degree of public skepticism regarding the vaccination campaign’s efficiency and transparency. Mass vaccination against coronavirus using the Russian “Sputnik V” vaccine began on 1 February (Ria Novosti, 1 February 2021).

For more on protests in Central Asia, see this new ACLED joint report with our partners at the Oxus Society.