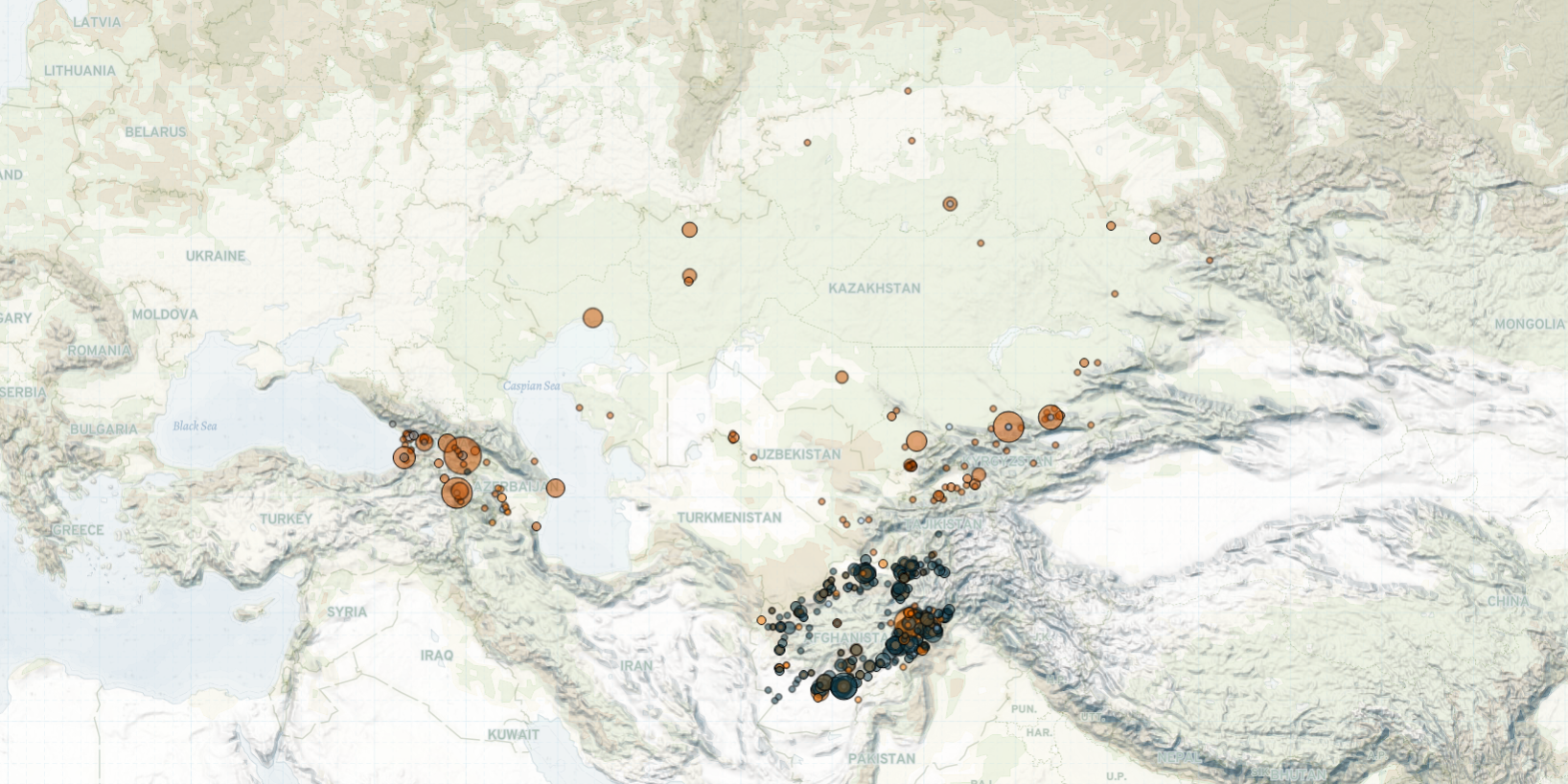 Last week in Central Asia and the Caucasus, Afghan forces’ air and ground operations targeted the Taliban and the Islamic State (IS). Civilians were also killed in a number of unclaimed attacks, similar to weeks prior. Meanwhile, the Afghan government’s 2021 budget proposal sparked protests by civil servants. In the de facto Republic of Artsakh, the casualties of remnant mines continue to rise. In Armenia and Azerbaijan, relatives of the soldiers who went missing in the 2020 Artsakh War organized protests. In Georgia, demonstrations against coronavirus measures continued. In Georgia’s breakaway state of South Ossetia, a Georgian citizen was sentenced to prison for crossing the de facto border, triggering demonstrations. In Kazakhstan, persecution of ethnic and religious minorities in Xinjiang region of China was condemned by ethnic Kazakhs. On the Uzbek-Kyrgyz-Tajik borders, demonstrations took place regarding water resources and non-demarcated areas.

In Afghanistan,1ACLED is currently conducting a review of sourcing and reporting of the conflict in Afghanistan since 2020. Afghan forces continue to inflict high numbers of casualties on the Taliban in air and ground operations, mainly in Kandahar, Nangarhar, and Balkh provinces. Last week, airstrikes in Nangarhar province also targeted IS militants. A similar operation was last reported in March 2020. Afghan forces seized control of some areas from the Taliban in the Sherzad district of Nangarhar province. The fighting displaced around 4,000 families in the region. Meanwhile, the Taliban continues to target pro-government militia groups, Afghan police, and military forces with lethal offensives, remote explosives, and snipers. Attacks last week took place in over 25 of Afghanistan’s 34 provinces. The group also overtook an army base in the Chimtal district of Balkh province.

Trends did not change in attacks targeting civilians last week. Government employees, tribal leaders, and journalists died in a number of unclaimed attacks in Faryab, Kabul, Helmand, Kandahar, and Nangarhar provinces. In addition, an unidentified group targeted a United Nations (UN) convoy, killing five policemen accompanying the convoy, in the Surobi district of Kabul, though no UN personnel were harmed.

In a separate development, the Afghan government budget has been a widely-discussed issue in recent weeks. The drafts of the budget proposals were rejected by the Afghan parliament, with lawmakers advising the government to address the pay disparity between civil and public servants (Anadolu Agency, 16 January 2021).  Parliament’s response was supported by the protests of government employees, tribal elders, and teachers. Protests eventually led the government to approve the salary raises of low-ranking government employees (TOLO News, 13 February 2021).

Along the Armenia-Artsakh-Azerbaijan Lines of Contact, the number of remnant landmine victims continues to rise. Three civilians were killed last week in an anti-tank landmine explosion near Nuzger village, captured by Azerbaijan in the 2020 Nagorno-Karabakh (Artsakh) war. In the Azerbaijani-controlled part of the Martakert region in the de facto Artsakh Republic, a high-ranking Azerbaijani officer and three other soldiers were wounded by a landmine.

In Armenia, several protests took place over soldiers and prisoners of war who remain missing after the 2020 Artsakh (Nagorno-Karabakh) war. (For further information about the 2020 Nagorno-Karabakh war, see ACLED’s Ten Conflict to Worry About in 2021 series.) Parents and relatives of disappeared soldiers organized demonstrations in Yerevan and Gyumri cities, demanding the government to take proactive steps in the negotiations over the Armenian prisoners of war. Armenia and Azerbaijan exchanged one and five prisoners of war, respectively, last week. Many more remain in captivity (Azatutyun, 10 February 2021).

Similarly, in Azerbaijan, some families of missing soldiers protested in front of the Defense Ministry of Azerbaijan, calling on authorities to speed up search operations in the region (Turan Information Agency, 8 February 2021).

In Georgia, people continue to protest against the strict anti-pandemic restrictions adopted by the government. Demonstrators gathered in Batumi, Tbilisi, and Zugdidi, protesting against the coronavirus restrictions. They stayed outside overnight to defy the curfew hours.

Meanwhile, rallies were organized in Tbilisi, Gali, and Kvemo Chala to support a Georgian citizen, Zaza Gakheladze, who was sentenced to a lengthy prison term for crossing the de facto border of South Ossetia. Gakheladze was wounded and detained in July 2020 by Russian troops who had installed fences along the border to prevent crossings, despite objection from the Georgian government (Civil.ge, 12 September 2020). Since 2018, Russian soldiers have opened fire on three Georgian citizens and have arrested two others for crossing the border for various reasons, including grazing of livestock or collecting herbs in the nearby forests (JAM News, 9 February 2021). As Russian support to Georgia’s breakaway region has drawn international attention and condemnation, such incidents occur rarely, yet are usually followed by a wave of protests in Georgia (RFE/RL, 5 February 2021).

In Kazakhstan, relatives of ethnic Kazakhs from China’s northwestern Xinjiang region protested for three days in a row in Almaty city, demanding the release of their relatives detained in China. The protesters reiterated claims about repressive policies toward ethnic and religious groups in China detained in the network of facilities officially known as reeducation camps (RFE/RL, 9 February 2021). Protesters also demand that Kazakh authorities take an explicit political stance about the persecution of ethnic Kazakhs in the Xinjiang region. Protests against Chinese policies in Xinjiang have taken place sporadically in recent years; these latest protests began after two ethnic Kazakhs from the Xinjiang region were attacked in Nur-Sultan and Almaty, hence inviting expectations from the Kazakh government specifically (RFE/RL, 22 January 2021).

Meanwhile, in Kyrgyzstan, a number of protests took place over border issues. Activists from the Batken region by the Tajikistan border protested the new Kyrgyz prime minister’s statements regarding the Tortkul water reservoir. The reservoir is the only source of freshwater in the region, the PM recently announced that a canal filling up the reservoir partially went under Tajikistan’s control (24.kg, 8 February 2021). Another protest took place in the same district, where Kyrgyz locals demanded the removal of Tajik border guards from the disputed areas until the border demarcation is complete. Similarly, in Kyrgyzstan’s Jalalabad region by the Uzbekistan-Kyrgyzstan border, locals protested against the presence of Uzbek border guards in the non-demarcated areas. Due to the unfinished demarcation process and limited access to water resources, tensions persist among locals along the Kyrgyz-Tajik-Uzbek borders, which have previously resulted in public unrest and rioting (CABAR, 17 November 2020). (For further information about demonstration drivers in Central Asia, see ACLED’s joint piece with Oxus Society for Central Asian Affairs, Understanding Disorder in Central Asia).